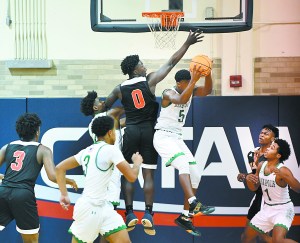 The new school — the Wolverines — started fast and led 19-13 after a quarter.

A.L. Brown, under new coach Andy Poplin, came back to lead 27-26 at halftime, but West Cabarrus put together a strong fourth quarter.

Bryson Chajon, another junior, scored 15 for the Wonders. Junior Ja’Lan Chambers had 10 points, as three players accounted for 51 of Brown’s 56.