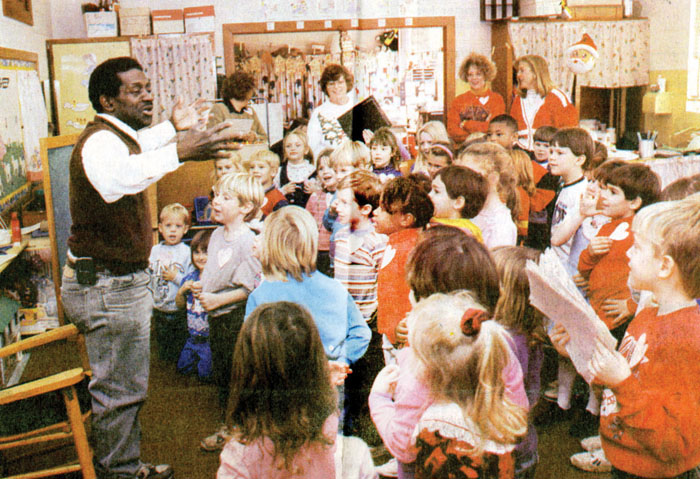 CHINA GROVE — The China Grove Town Council on Tuesday night passed a proclamation honoring the life of Carl Wilkerson, the beloved China Grove Elementary custodian who passed away in November.

“Whereas Mr. Wilkerson was a dear friend to many students, teachers and school administrators who said he had a heart of gold,” China Grove Mayor Charles Seaford said while reading the proclamation aloud. “Whereas his passing will surely be felt by many family members and friends who truly loved him.”

Before Seaford read the proclamation, China Grove resident Carolina Marshall stepped forward to speak about Wilkerson, with whom she said she had a strong relationship. Marshall visited Wilkerson often, bringing him cookies and other treats, and spent time praying with him.

Since Wilkerson’s passing, Marshall started a Facebook group where his friends and family have gathered virtually to share memories and show their appreciation for his life.

“Someone said, and I’ve thought so many times since I’ve read it, that if there were more people like Carl, this would be such a better world,” Marshall said.

Marshall also expressed her desire to have a road near China Grove Elementary School renamed in Wilkerson’s honor. Seaford said the China Grove Town Council did not have the authority to do that and that Marshall would have to go to the Rowan-Salisbury School Board. Marshall said she plans to do that.

Later in the meeting, Seaford said he felt like China Grove was too “reactive” to Wilkerson’s passing. He said that he’d like the town to establish a three or four person committee that would select at least one person, or several people, for the town council to honor each year.

“I’m sad to say that we were reactive to Mr. Wilkerson’s situation, but what I would like to do is to get more proactive with recognizing the people in our community that have made a difference to China Grove,” Seaford said.

Town Manager Ken Deal said the town will follow Seaford’s wishes, but did not offer a timeframe on when the committee will be established.

• The China Grove Town Council voted unanimously to approve a resolution to adopt the U.S. 29 Highway corridor study that was completed by Raleigh-based planning and design consulting firm Kimley-Horn. The study, which was presented to the town council in November, is a future vision for the corridor that features greenways, pedestrian and bike paths and new signage welcoming travelers to downtown China Grove, among other characteristics.

While the North Carolina Department of Transportation will have the ultimate say on how the corridor is developed, the study will serve as a guideline for China Grove and will give the town more leverage in conversations with NCDOT.

• Council members set a public hearing for its meeting on Feb. 2 regarding the potential annexation of Rowan County tax parcel 117 036. The owner has requested annexation to use the town’s water and sewer. China Grove Town Clerk Pamela Mills investigated the request for annexation and found that it is sufficient.