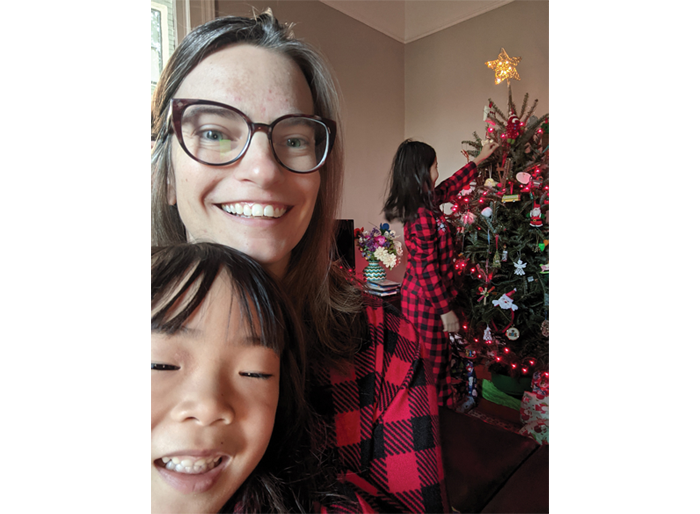 SALISBURY — The transfer happened so quickly that Alissa Redmond didn’t even have time to enjoy the moment when she was finally united with her daughter.

After several years of wading through paperwork and being examined by adoption officials, Redmond made a complicated, nerve-racking trip to Hong Kong last month to pick up Tin Yan, 10, and bring her home to Salisbury.

Due to COVID-19 protocols, Redmond had to meet Tin Yan and adoption officials in a parking lot to conduct the handoff. Before Redmond could even begin to form a bond with her daughter, who she’d previously only chatted with over video calls, there were more pressing problems to solve.

“I picked her up in a parking lot, we got into a taxi and she didn’t know how to close a car door,” said Redmond, the owner of South Main Book Co. in downtown Salisbury. “It was so intense for her. There were so many new things for her to go through. She’d just bought a suitcase that was packed with everything she’d owned in it.”

After spending a few days in a hotel in Hong Kong, the mother and daughter returned to Salisbury, where Redmond introduced Tin Yan to Margaret, 5, who is her biological half sister.

Redmond adopted Margaret from a Hong Kong orphanage in 2016 when Margaret was just 14 months old. At the time, Redmond was working as a consular for the U.S. Department of State, primarily charged with handling VISA applications. Part of her job was also helping with adoption cases, so Redmond decided to familiarize herself with the local orphanages. 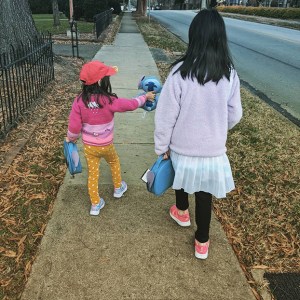 Margaret and Tin Yan walk down the street together. Since meeting for the first time several weeks ago, the sisters have started to form a bond. Photo submitted.

Redmond didn’t walk out of the orphanage with a child that day, but within two months she was a mother.

“I put in the paperwork to adopt Margaret in June, had a home study completed in July and then Margaret came home in August,” Redmond said.

Two years later, when Redmond was preparing for a move from Hong Kong to Virginia, Margaret had a request for her mom — she wanted a sister.

“I knew she had a biological half sister and I felt very emotional about the fact that we were leaving her sister behind,” Redmond said. “I started the process at that point to try to adopt (Tin Yan).”

The process to adopt Tin Yan, Redmond said, was a “night and day” difference from adopting Margaret.

Adopting Tin Yan was complicated by the fact that Redmond, then living in Virginia, was no longer a resident of Hong Kong. When Redmond moved from Virginia to her new station with the State Department in Bolivia, the process was prolonged even further. Redmond said that international adoptions do typically play out over the course of several years, but moving didn’t help her cause.

“The fact that I moved so many times while I was trying to complete the adoption was a huge hindrance,” Redmond said. “That definitely added a significant amount of time to everything.” 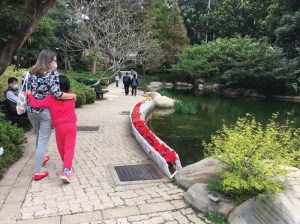 Alissa Redmond and Tin Yan walk together in a garden in Hong Kong. Photo submitted.

When Redmond and Margaret were evacuated from Bolivia due to civil unrest in November 2019, Redmond decided to take an extended leave from the U.S. Department of State in search of a more stable living situation. A North Carolina native, Redmond returned to her home state.

“I was originally looking to be near Charlotte because that’s where my adoption agency is, that’s where my brother is,” Redmond said. “I thought I was going to buy a house and live off savings for a couple years to get this adoption to finally happen.”

But then a random Google search changed her life.

“I was sitting at my desk in Bolivia right before we got evacuated and I randomly searched bookstores for sale near Charlotte, North Carolina, and happened to find this little gem of a store,” Redmond said.

Within a matter of days, Redmond bought a car, visited Salisbury for the first time and made an offer to buy South Main Book Co. Wendy Alexander-Persse, then-owner of the store, accepted Redmond’s offer. Redmond’s secure situation worked in her favor and Tin Yan’s adoption was finally set to go through in March. But when the coronavirus spread across the world, the adoption was once again put on hold.

Finally given the green light to return to Hong Kong for Tin Yan in December, Redmond readied for a flight. Since she was traveling across the world in a pandemic, there were several precautions that she had to take.

“I’ve traveled all over the world and done a lot of complicated trips, but this was the most complicated thing I’ve ever tried to do,” Redmond said.

After driving to a Gastonia hospital to have a COVID-19 test conducted early on a Saturday morning, Redmond boarded a plane to Los Angeles. But when she attempted to get on her nearly 20-hour flight to Hong Kong, Redmond ran into another hurdle.

“When I got to the airport in L.A. and showed them my results, they wouldn’t let me board the plan because my middle name wasn’t on the results,” Redmond said. “I had my adoption agency call and wake up a person in medical records from the hospital in Gastonia and they changed my records and I had maybe five minutes to board my plane. It was the most intensely stressful trip that I’ve ever taken.” 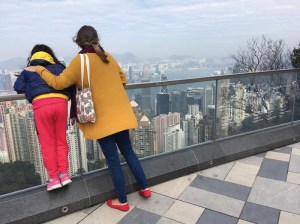 Alissa Redmond and Tin Yan look out over the Hong Kong skyline after finally being united. Photo submitted.

In order to avoid having to quarantine upon her arrival in Hong Kong, Redmond received a waiver from the government. Even then, she was still turned away from most motels in the city, which forced her to stay in an exuberant, overpriced hotel.

The taxing trip was worth it, Redmond said, because she was finally able to bring Tin Yan home and introduce her to Margaret. Although Margaret and Tin Yan are related, they’d never met. After “circling each other” for a day, the sisters have become fast friends and are starting to learn each other’s personalities and habits.

“It’s really interesting how quickly they saw each other for who they are and the value that they have in their life,” Redmond said. “It’s somebody who they can play with and they’ll always be there for each other.”

Since Redmond returned with Tin Yan a few days before Christmas, she was able to take both daughters through the light exhibit at the N.C. Transportation Museum. The sisters opened presents and enjoyed Christmas cookies together. Tin Yan misses her home and culture in Hong Kong, Redmond said, but is starting to make a new home in Salisbury.

Recently, Tin Yan discovered Redmond’s collection of high-heeled shoes and has taken to wearing the shoes as she walks down an imaginary runway in the family’s hallway at home.

Tin Yan will attend school virtually next semester and Redmond has plans to teach her English in the South Main Book Co. Redmond said that she couldn’t think of a better place to bond with her daughter.

“I always had it in my head that I can teach her English in the bookstore as long as there is help there to take care of customers,” Redmond said. “… It’s the most beautiful space for her to learn about English and what it means to be an American and how to appreciate literature.”

Despite the COVID-19 pandemic and Redmond having to spend much of her time and energy on the adoption, South Main Book Co. had a prosperous 2020, Redmond said.

“When I bought it, I bought it as kind of a lark thinking I could pour some of my savings into this and have it as a hobby and run it in the background, but the store has done well this year,” Redmond said. “I’ve been surprised at how much it has supported my family.”

“I don’t think this ever would have happened,” Redmond said, “if I didn’t have my bookstore and my life here.”

Although Redmond said that she is still trying to unwind from the stressful trip to Hong Kong, she is beginning to enjoy and appreciate being a mother of two.