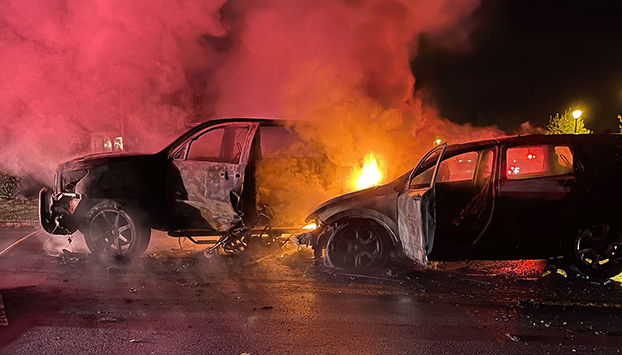 SALISBURY — One man was airlifted to Wake Forest Baptist Medical Center with life-threatening injuries Tuesday after being pinned between an SUV and his truck on Sherrills Ford Road.

The incident was caused by two separate crashes that occurred around 5:32 a.m. near the intersection of Sherrills Ford Road and Cameron Drive, said Trooper T.L. Gillespie.

In the first crash, a moped traveling toward Salisbury on Sherrills Ford Road struck a truck as it was pulling out onto the road. In that crash, there were no injuries of note, Gillespie said. The drivers of the moped and truck exited their vehicles.

It was then when an SUV also traveling toward Salisbury on Sherrills Ford Road struck the truck and pinned its driver against his vehicle, Gillespie said.

The second collision created a fire and all three vehicles — the moped, truck and SUV — were engulfed. Gillespie said the driver of the moped pulled the truck’s driver away from the scene of the crash before the vehicles caught on fire.

Gillespie said he couldn’t immediately release the name of the truck driver who was airlifted.

It’s not clear, Gillespie said, whether the driver of the SUV sustained any injuries. While a person claimed to be the driver at the scene, witnesses told responders there was another person driving the vehicle, Gillespie said.

The roadway was closed for about two and a half hours as emergency personnel responded to the crashes.

No changes to Rowan-Salisbury Schools’ plan B when classes…