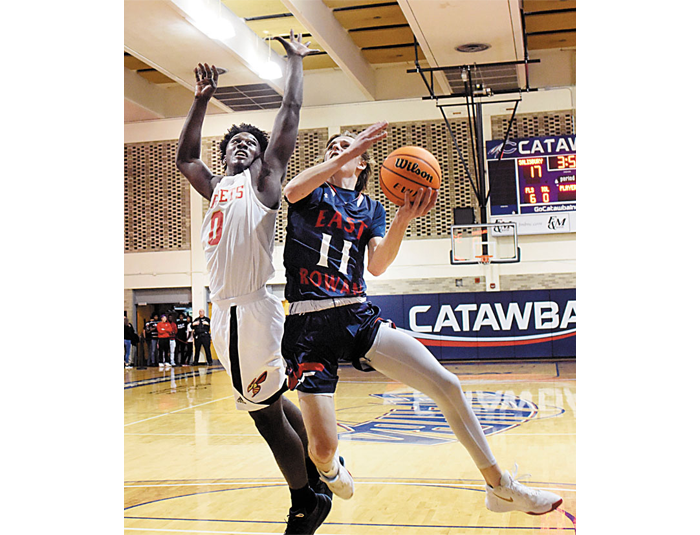 Fifth in a series of previews on local basketball teams.

GRANITE QUARRY — Worst to first in the North Piedmont Conference in 2021?

That’s probably a longshot, given the team that West Rowan has assembled in Mount Ulla.

But an East Rowan squad that was 2-23 in 2019-20 and was rated as one of the three worst 3A teams in the state by MaxPreps has an opportunity to make noise this season.

New coach Andrew Porter inherits a program burdened by a 14-game losing streak, but he might be able to make an immediate splash. A winning season appears to be a serious possibility for the Mustangs. That would be a reason to throw a parade, as East hasn’t experienced a winner since 2012 when it went 13-12 and took seven of 12 league games.

There are a lot of reasons to be optimistic. The top seven players down the stretch last season are still around to start this COVID-shortened one.

Five of those seven — seniors Gavin Sprinkle, David Jordan and Vincent Jones, junior Cameron Padgett and sophomore Dylan Valley — ranked among the county’s top 20 scorers in 2019-20. All five averaged under 10 points per game, but more than 7 per game.

East figured to be pretty good this season based on the guys coming back, but the Mustangs have added size, speed and depth.

“We’re going to look different from the East Rowan that people have gotten used to seeing,” Porter said. “We want to push the ball offensively, get up and down and put pressure on other teams defensively. We’re pretty loaded in our junior class and we’ve got the athletes, the length and the depth to play a fast-paced style when we want to. The guys enjoy playing that way.”

Porter encountered a challenging preseason, including a first-hand COVID-19 experience for his own family. Through it all, the Mustangs kept working with the assistant coaches. Shooters got better on the drive. Drivers got better with their jumpers.

And every Mustang worked on defense. Porter’s preferences are the Pack-Line version of man-to-man that Virginia has made famous and the aggressive, dribbler-trapping 2-3 zone that Syracuse has employed with great success.

“We’ll switch things up quite a bit defensively and try to confuse our opponents,” Porter said.

Senior guards Gavin Sprinkle and Landon Shuping have been varsity fixtures since they were sophomores. Sprinkle averaged 9.2 points; so, he’s East’s leading returning scorer. Shuping can make some 3s, but he’ll primarily be in a ball handling role.

“Sprinkle can knock shots down, and we’ve been working with him on releasing his shot quicker,” Porter said. “Shuping is a very level-headed kid. I’ve been impressed with how he can handle the ball against pressure.”

The guard crew will include Sammy Pinckney, the outstanding football running back. Pinckney is tough, strong and explosive on the drive as well as on defense. He’s worked on his outside shot, and if he can make some 3-pointers, he’ll be a tough man to deal with.

Senior Tahj Young and juniors Gavin Clement and junior Khiliga “Kee” Ellis are good athletes and will be in the backcourt mix.

“Ellis has a future and is a kid who might really blow up next year,” Porter said. “Young and Clement are quick and fast. They’re non-stop.”

Then there’s sophomore Dylan Valley, who was one of the county’s top varsity freshmen a year ago. His 7.2 scoring average included a 25-point outburst against North Iredell late in the season.

“You may not recognize him,” Porter said. “He’s added muscle and gotten a lot stronger. He’s putting it on the deck more.”

That’s a lot of guard options. East also has no shortage of frontcourt bodies.

Senior Vincent Jones, another outstanding football player, is a force who stands 6 feet 1 inches and is athletic and rugged enough to grab double-digit rebounds. He turned in several double-doubles and had a 19-point game against West Rowan. He scored in double figures in seven of East’s last 10 games, a run that lifted him to second team all-county.

Junior Cameron Padgett, a UNC baseball commit, is 6 foot 4 inches, long and active. He’s been more of an attacker than a shooter, but he’s another Mustang who’s worked diligently to expand his shooting range. He scored in double figures 11 times last season and averaged 8.4 points per game.

“Schenk and Dale are strong kids who are willing to bang in the post,” Porter said. “Overcash is really versatile. He can play four positions.”

East is scheduled to open at Mount Pleasant on Monday.