Working from home prompts some to make office upgrades, forces others to adjust 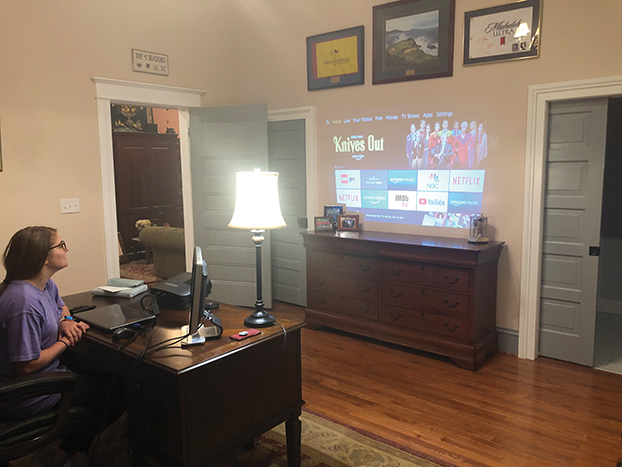 Glenn Dixon's daughter helped transform the spare bedroom into an office. The new setup even featured a projecter. Photo submitted.

SALISBURY — Even though Glenn Dixon worked from home before COVID-19 forced many employees to clock in from their houses, the improvised office he’d set up in a spare bedroom wasn’t cutting it anymore.

Dixon, a Salisbury resident who works for the U.S. State Department in Washington D.C., was splitting his time between the nation’s capital and his home on Fulton Street before the coronavirus pandemic.

“Within the last year, I was able to negotiate with them to have my work schedule to where I’d work a week here in Salisbury and a week in Washington D.C.,” Dixon said.

Since he only worked from home every other week, Dixon didn’t put much effort into a home office. His layout was simple — a computer monitor, keyboard and printer stationed on a cabinet in a bedroom that didn’t get much use. For a time, the office did the trick. But when COVID-19 prompted the government to send its employees home full-time, Dixon outgrew his makeshift office. 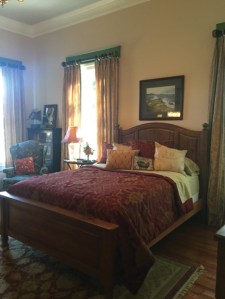 This is what Glenn Dixon’s spare bedroom looked like before his family turned it into an office space for him to work in. Photo submitted.

His family noticed his dilemma and decided to step in.

“As a Father’s Day gift, my family and especially my wife and daughter Susanna, did an office crash where they took the bed out, got me a new desk,” Dixon said. “Now I have a big setup with my laptop computer and a monitor on it.” 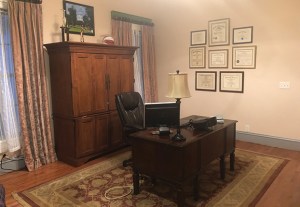 As a Father’s Day present, Glenn Dixon’s family turned the spare room he was conducting work in into a legitimate office, complete with his personal memorabilia and a desk instead of a bed. Photo submitted.

While Dixon had his office upgraded, Starling Johnson Kaklamanos lost her home workspace when her husband, who works for Bank of America, was instructed to go full-time from home.

Kaklamanos works from different spots around her house throughout the day, avoiding wherever is noisiest in search of quiet and a decent internet connection. And with two young kids at home, finding a peaceful work space can be tricky.

Kaklamanos makes sales calls from the kitchen table, the sun room, and even a large closet where she uses an antique vanity as a desk.

“The only place I can go where it’s guaranteed quiet for a long time is the closet,” Kaklamanos said.

Kaklamanos said that she’ll stick to her nomadic work from home lifestyle until she or her husband can return to their respective offices. The only upgrade Kaklamanos has attempted to make was to find a new, faster printer. But those dreams were dashed when her company’s informational technology director told her that the market for printers was scarce.

Unlike Kaklamanos, Ken Ingle, the chief officer of information services at Rowan-Cabarrus Community College, has been able to bolster his work-from-home setup.  He said that he watched “a lot” of YouTube reviews before purchasing a new office chair when the college’s staff moved to remote work.

“I ended up finding one that I love and it worked out well, but I watched probably more reviews than I’d care to admit to try to find the right fit for me,” Ingle said.

Ingle said that he settled on a plain, comfortable office chair, but he has a friend who went for something a little bit more upscale.

“I have a good friend who works at another college and he bought a gaming chair, a really wild looking chair that he likes a lot,” Ingle said

New, more comfortable office chairs and larger monitors are the most common improvements Ingle has seen Rowan-Cabarrus staffers make to their home offices.

The desire among employees from home for new office furniture has been a boon for major companies. Furniture maker Herman Miller reported that sales in its home office category increased by 300% after the pandemic began. Local retailer R and J Furniture Xpress in Spencer hasn’t seen its profits skyrocket that much, but it has experienced a significant bump in sales and increased demand.

John Barnhardt, the co-owner of the furniture store, said that his shop has seen its sales climb 30% since the pandemic began. While customers have come in frequently looking for sofas and coffee tables, they’ve been in more often to check out the store’s supply of office furniture.

“There’s a lot of people, including my wife, who are working from home now as opposed to an office. It looks more and more like this could be a more permanent thing than temporary,” Barnhardt said. “They’re upgrading desks, office chairs, bookcases, just things to work from home.”

Barnhardt said that desks and chairs have been “extremely popular,” but even bookcases have become an in-demand item. With furniture sales increasing across the country, manufacturers and supplies are wading through a backlog of orders.

“Manufacturers are backed up, in some cases as much to 40 weeks,” Barnhardt said. “That’s the outside. The norm is 12-16 weeks.”

Office furniture is typically even harder to find. After recently ordering one customer a set of bookcases, Barnhardt found out that they wouldn’t even be made until April.

With remote work seeming as if it could be a long-term adjustment, Barnhardt said that he hopes furniture suppliers can catch up to the increase in demand so that more customers can find what they need to make working from home as comfortable and productive as possible.