‘We thought it was a blessing:’ local businesses thankful for grant program 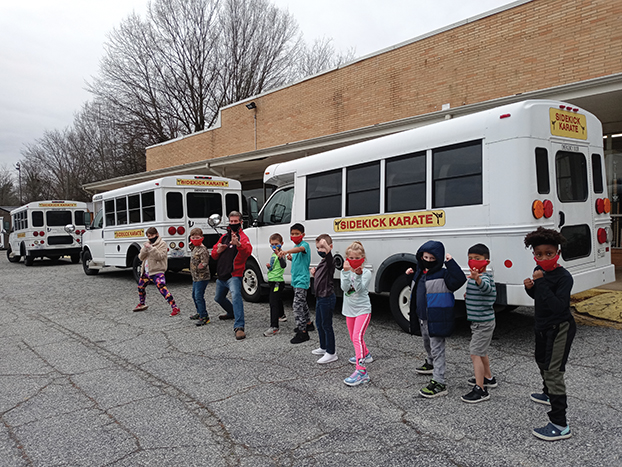 Ricky Smith poses with students in front of the three buses that Sidekick Karate uses to transport students to and from its after school and day programs. Photo submitted.

SALISBURY — When Ricky Smith learned karate in the early 1970s, he was taught how to roll with the punches.

The ability to react and adapt — tenets of the martial arts he teaches at Sidekick Karate in downtown Salisbury — has never been more important than in 2020.

Even so, it’s been a challenging year, which is why Smith said he was thrilled to be awarded a $3,500 grant from Rowan County’s small business grant program last week.

“When we found out about the grant, we thought it was a blessing,” Smith said. “It’s not just a blessing to us but to the community also. I hope others took advantage of it that are in our situation.”

Smith was one of 77 small business owners who were awarded a grant through the program that was approved by the Rowan County Board of Commissioners last month and administered by county staff and McGill Associates. In total, the grant program doled out $307,000 to local businesses. The funding was allocated from the Coronavirus Relief Fund.

Business owners were able to pick up their checks, which were made out for $3,500 or $5,000 depending on the size of the business, from the Rowan County Tax Collector’s Office starting on Wednesday.

For many small business owners like Smith, the grants will soften the blow inflicted by the pandemic. After closing down for several months in the spring, Sidekick Karate reopened in the summer and began operating at 50% capacity. The dojo has implemented enhanced sanitation practices and requires all students and teachers to wear masks at all times.

“We did everything we could to avoid COVID-19,” Smith said. “We got strict on the masks, the hand sanitizer. It was an education, but I think we’ve cleaned so much we have Fabuloso coming out of our lungs.”

Smith said that he doesn’t know if Sidekick Karate would have made it through the height of the pandemic if it wasn’t for the services it provided parents. In the summer, the dojo offered day camps that allowed parents to put their children in a constructive environment while dealing with the pressures brought on by COVID-19.

“We’re a community business and we serve kids and in this era of lockdowns, A/B days in school and parents struggling, I think our service for the kids is what has gotten us through,” Smith said. “If we were just a regular karate school, it’d be a different scenario. We’ve been able to hang in there.”

When school returned with a hybrid schedule, Sidekick Karate offered a reduced version of their typical after-school programming. Smith, along with his twin brother Randy and wife Edie, drove buses around the county to retrieve students and bring them back to the dojo. There, the trio helped each student with homework, gave them a snack and taught them martial arts.

In past years, the buses were brimming with students, Smith said, but this year, there were only a few kids on each bus.

“We kept the buses running, even though it wasn’t that feasible and we had just a few where we used to have 30 or 40,” Smith said. “We just kept on because we felt like the community needed our service because the community has been good to us.”

The grant from the county, Smith said, will help the dojo continue to provide after school services in 2021. Smith commented that the application and verification process was smooth and said that he’d give it “two thumbs up.”

Scott Fisher, who owns Savage Tans on Jake Alexander Boulevard with his wife Leisa, was also a recipient of funding through the grant program.

“After this year with COVID and being closed during peak, we’re absolutely not going to recoup everything, but this grant is definitely a help,” Fisher said.

After opening Savage Tans in September of 2000, Fisher and Leisa have kept the business going for over 20 years despite hurdles along the way. When tanning salons across the country were closing down in the wake of the Great Recession and after the Affordable Care Act levied a 10% tax on tanning customers, Savage Tans remained open.

During the most recent challenge, the COVID-19 pandemic, Savage Tans was forced to close for at least eight weeks in the spring, which is typically the salon’s busiest season.

“I think from the second week of March all the way through April,” Fisher said. “It was a substantial amount of time and it was right during our peak season.”

When Savage Tans resumed operations, Fisher said that business was steady, but wasn’t enough to make up for what was lost.

“Business has been nowhere near the magnitude with what we would have seen because folks try to get in prior to summer,” Fisher said. “By the time we opened back up, it was summertime.”

Although Savage Tans received funding through the Paycheck Protection Program, Fisher said that it wasn’t much and was quickly used up on payroll expenses. Fisher said the small business grant from the county will help him continue to pay his staff of six employees and will help the salon prepare for the busy season in the spring.

Ashli Blake, who owns Above the Collar Hair and Beard Bar, said that she hopes the money she received from the small business grant program will be the last aid she’ll have to apply for.

After working at Sports Clips for several years, Blake decided to open shop in September of 2019.

“It was a huge leap of faith,” Blake said.

Just months into the new venture, Above the Collar was forced to close for about two months. During that time, Blake said that the small customer base she’d managed to form stayed loyal.

“We had a lot of customers that were supportive and prepaid for haircuts. When we opened back up, everyone came in for their free haircuts,” Blake said. “The customers we had stayed loyal.”

Blake said that the money she received from the PPP allowed her to remain open and keep on the other two hair stylists she employs. With the county’s small business grant, Blake said that she will be able to catch up on rent payments, stock up on hair supplies and begin to turn the corner.

“I’m very grateful to the county for doing this program,” Blake said. “It was a huge help and a surprise.”

Library’s cards for a cause spread cheer to members…