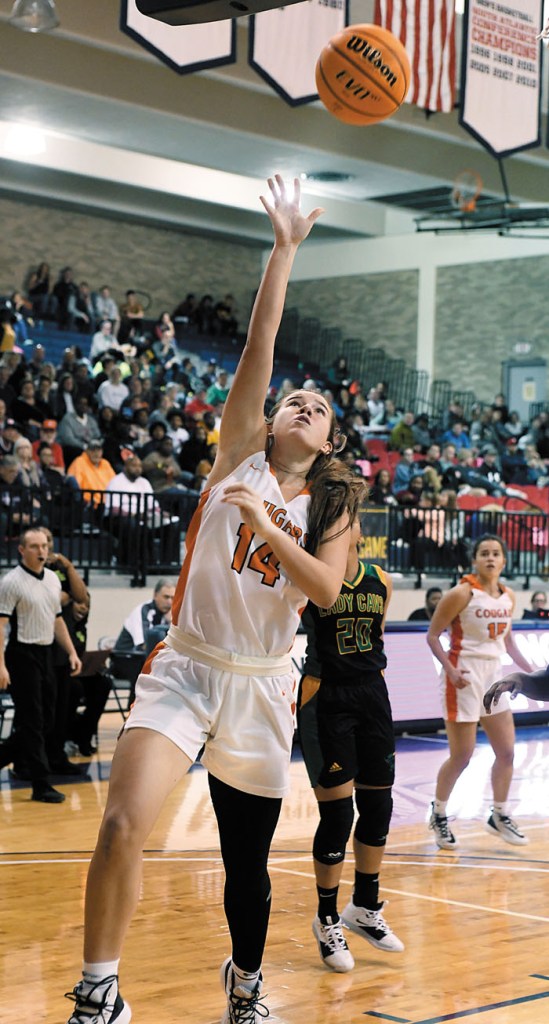 Third in a series of previews on local basketball teams …

So Carson’s 25-4 season may have been the quietest, least acclaimed 25-4 in county history. It came with an outright North Piedmont Conference title and two playoff victories. Carson wasn’t all that far away from winning them all. There was an early four-point loss to a 4A, two tight losses to West, and then a two-point setback in the playoffs.

On an average night, Carson won by 19 points.

The end is in sight now for what has become a consistent winning machine. Carson has no jayvee squad this year and has zero sophomores in the school playing basketball. Just one freshman came out. She’ll be the manager this season.

“I think it’s a statewide situation, just a lot fewer girls playing basketball than there used to be,” Carson coach Brooke Stouder said. “The rise in interest in volleyball and softball may have something to do with that.”

But that’s a worry for down the road. As far as the present, Carson couldn’t be in much better shape.

Leading scorer Maci Cooper graduated, but the Cougars still have seniors Colbie Perry (10.2 points per game), Ellie Wilhelm (10.0), Carleigh Perry (8.8) and junior Hannah Isley (8.3). Any of those four could be the leading scorer on a given night, but the probable leading scorer will be 6-foot junior Mary Spry, who averaged 11.8 points and 9.0 rebounds for East Rowan last season and was second team all-county.

Carson has never had a big player with Spry’s skills. She’s a difference-maker. She’ll make life easier for all the Cougars, especially Carleigh Perry, who can move out to a forward spot. Spry had 38 blocks last season and 58 assists. She’s a well-rounded player.

“We’ve never had size, but now we do,” Stouder said. “Mary is really skilled for a 6-foot player. She can score with either hand.”

Besides all those scorers, senior point guard Lani Isley, who averaged 4.7 assists per game, is still on hand. She’s an old-fashioned, pass-first point guard and is as important as anyone.

“When you play on a team with a lot of shooters, someone has to be the one who takes on the job of setting up everyone else,” Stouder said. “Lani is that person for us. She gets the ball down the floor. She gets us into our offense. She’s physical. She’ll take a charge.”

Colbie Perry is a terrific 3-point threat. The Converse College signee was 8-for-8 on 3-pointers in Carson’s scrimmage with Salisbury last week. She’s also a long-armed defender.

“She can shoot with great range, but she’s more than a shooter,” Stouder said. “She’s mixing it up more now, taking it to the basket. Defensively, she’s very important in our 1-3-1 trap. She led us in deflections last season.”

Carleigh Perry, Colbie’s first cousin, averaged 6.5 rebounds to go along with her points. At 5-foot-8,  she racked up double-figure rebounds five times. Her junior season was her first fully healthy one in high school after two ACL tears. She was second team all-county.

“Carleigh has overcome more than any one person should have to,” Stouder said. “She gives us so much grit and tenacity and she’s also got a lot of skills. She can rebound it and take it all the way and she’ll show more shooting range this season.”

Wilhelm may not be amazing in any one area, but she quietly does everything quite well. She represented Carson on the all-county first team last season because she was the Cougars’ most efficient offensive player. She shot 52 percent on 2-point field goals.

“She can shoot, she can handle, she can rebound, and she can defend,” Stouder said. “She’s just steady. Ellie’s history is being at her best in the biggest games.”

Hannah Isley, Lani’s younger sister, gives the Cougars another scorer/rebounder. She can get hot. She had two 21-point games last season. She may not start for Carson, but she’d probably be the best player on half the teams in the county. She’ll be valuable.

Junior guard Aliayah White has only played a little on the varsity, but she could be ready to blossom.

“She’s got so much athletic ability,” Stouder said. “We’re hoping she unleashes it this season.”

Carson is going to get four volleyball players soon, including Lenoir-Rhyne signee Jaden Vaughn, who is about 5-10 and should make an impact on the boards.

Senior Kary Hales will be making a basketball comeback after a year away from the sport, as will Tate Barger, who hasn’t played basketball since middle school.

“Jaden, Kary and Tate are good friends with the senior basketball players, and they just decided why not play this last season together,” Stouder said. “They’ll help us. Jaden gives us more size. Kary is tough and has a very high basketball IQ. Tate can shoot.”

Victoria Storey, a junior guard, is the fourth volleyball player. She’s been on the jayvee basketball teams.

“There’s a lot of overlap as far as the sports seasons this year,” Stouder said. “It’s going to be an unusual season. Who can stay healthy is going to be a huge factor. Another key is going to be mental toughness. Playing basketball in a mask is hard. It’s not ideal, and it’s not fun. But we’ve got to fight through it.”

Fewer teams will make the state playoffs this shortened season. In the NPC, only the conference champ will be guaranteed a berth.

But with four seniors who have been on the varsity since they were freshmen, leadership shouldn’t be an issue. Lani Isley and Carleigh Perry are about as tough as they come. Wilhelm and Colbie Perry have been in so many pressure-packed tournament games and playoff games. They know what it takes to be succcessful.

“We’re fortunate to have the experience that we do,” Stouder said. “This group of girls is extremely unselfish. They want to win; they know how to win, and they have always won.”