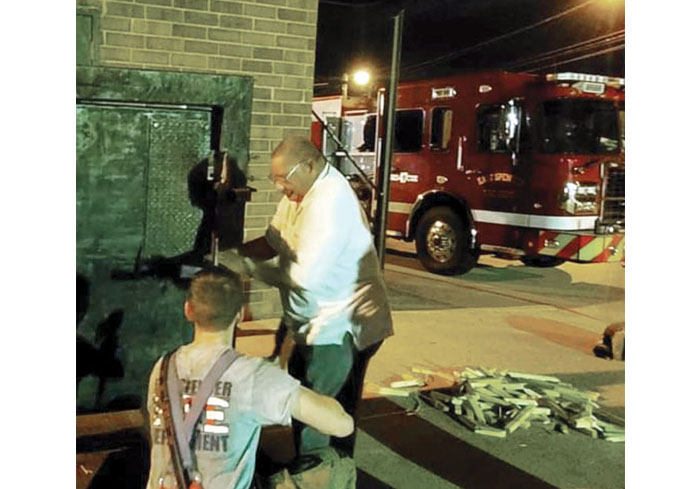 EAST SPENCER — James Miller and Kenny Miller are two of three East Spencer firefighters who have served the town for over 20 years.

James has been a firefighter and one-time chief with the department since the 1980s after he graduated from what was previously named North Rowan Senior High. He’s also been a truck driver for R & L Carriers in China Grove for 23 years. It was his truck driving experience that aided him in the fire service.

“By me being a truck driver, I could drive the fire truck,” James said.

He said he got into the fire service simply because he wanted to serve his native town of East Spencer.

“They were needing volunteers at the time,” he said.

He said the fire department at that time was mostly made up of older men who were getting out of the fire service. Although he’s not certain of the year, but East Spencer began training with the city of Salisbury under Bob Parnell, who was then a training officer. Parnell has since become the city of Salisbury’s fire chief.

When asked about the difference in training in the 1980s and 1990s, James said, “They trained a lot.”

He said there has always been training efforts within the fire service. Now, firefighters also take fire courses through Rowan-Cabarrus Community College.

“I’m still learning from him. We have great guys who train hard,” James said.

James said there are lot of younger guys who have joined the department, and they’re doing great work. He said East Spencer is a great town to work for and he’s proud to have served as chief and work under Chief McBride.

His hope is that things continue to improve in East Spencer so that the town can attract more businesses and that the town continues to support its chief.

Kenny served under James when he was chief. His experience as a firefighter began after a call for volunteers.

“I joined to help out the community,” Kenny said.

He said the department has always needed firefighters, and it’s a lot to ask someone to risk their lives. Because there’s so much training involved, some people don’t want to commit the time, he said.

One of the major changes within the department is its bunk-in program — where firefighters stay overnight at the station so that, in case there is a fire, someone is there for a faster response.

Kenny said when he served in the department in the early years it was all volunteer.

He said the fire department now operates under a more well-structured administration.

“Back then when you got there, whatever you could do that’s what your title was,” Kenny said.

Kenny does drive the firetruck from time to time, but says he’d much prefer to “fight a fire than drive.”

“I’m grateful to be on the fire department. There’s a lot of dedicated guys,” Kenny said.