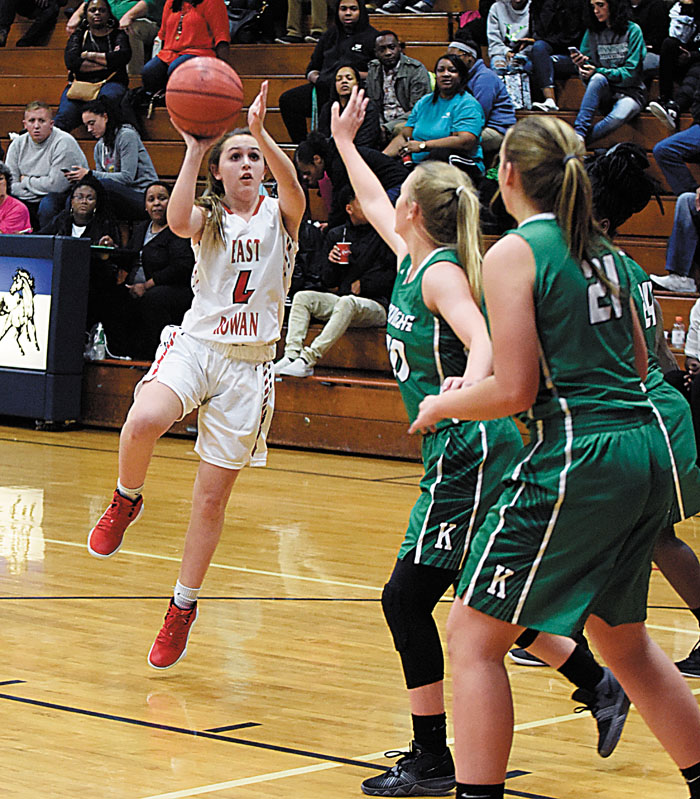 Fourth in a series of previews on local basketball teams …

Playoffs: Lost first round to Hickory

GRANITE QUARRY—  It’s back to the drawing board for East Rowan’s girls program.

No size and no seniors. That usually means problems.

The improvement shown by East’s program from 2017-18 to 2019-20 may have been as startling as any in the state. East got better by 35 points per night in a span of two seasons. East was scoring 22 more points per game, while allowing 13 fewer.

When he looked around last March, Holland figured the Mustangs had the opportunity to be even better in 2020-21, as long as their host of tall, young players continued to develop.

“We were right there, one step away,” Holland said.

But the existing roster dissolved like an aspirin in water during the summer months.

Besides losing three starters to graduation, the Mustangs lost promising sophomores Haley Dalton and Icesis Nwafor and top-notch junior Mary Spry to transfer. When sophomore Leah Hinceman decided to focus on her Division I volleyball dreams, it was a clean sweep, and East was starting from scratch.

Junior Madie Honeycutt, the backup point guard, averaged 1.2 points. She’s not only the leading returner, she’s the only returner from last season’s squad.

“It was a crazy summer, and I wasn’t even around for it,” Holland said. “It’s not the team I expected to have and it is frustrating to be starting over. But we have to move past the frustration. We’re getting to play this season, and we’re grateful for that. Playing is a whole lot better than not playing.”

It’s called playing the hand you’re dealt. There are certain to be some long nights. East vs. Carson’s powerful roster (twice) is not going to be much fun. But East will show up. The Mustangs will do their best. Holland has been here before. He was in a similar situation when he took over the program.

“Actually we don’t have as big of a numbers crunch now as we had a few years ago,” Holland said. “We’ve got 11 girls. We just don’t have any post players.”

It will be a junior-heavy team.

Honeycutt is small (5-foot-1), but so was previous point guard Adalie Harrison, who got a lot done for the Mustangs during the course of her career.

Junior Karli Peeler was a varsity reserve as a freshman and got into some games, but didn’t play last season.

Clara Beaver and Mac Misenheimer are up from the jayvees. Misenheimer is an excellent softball player.

“She’s got some competitive fire about her,” Holland said.

Junior Olivia McCray, an all-county track performer, will be making a basketball comeback.

The sophomores include some well-rounded athletes.

Sophomore Anasty Faavesi has done a good job for the varsity volleyball team this season.

Sophomore Peyton Whicker has enjoyed some success as a track hurdler.

“She has some skills, but it will be an adjustment from a small school to 3A basketball,” Holland said.

Freshman Hannah Waddell, who starred at Erwin Middle, is a candidate to be East’s leading scorer.

“She’s a guard, but she’s our most versatile player and probably our tallest player, so we’ll be counting on her to get some rebounds,” Holland said.

Another freshman, Jadyn Featherstone, has been competing well for East cross country.

Holland will try to put those 11 girls together and compete as a unit.

He’ll try to develop all those young guards into a decent team for the future.

“We’ll probably live and die by the 3,” Holland said. “We’ve got some streaky shooters and we’ll just have to find those nights when two or three girls are on.”

It’s going to be a strange, short season. “Masketball” some are calling it.

“If we come ready to play, you never know what might happen,” Holland said.

Texas A&M pours it on in fourth quarter to…