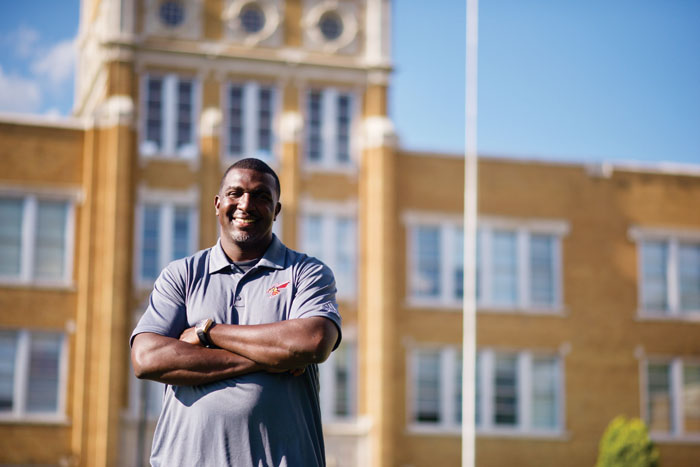 SALISBURY — Marvin Moore just wrapped up his first semester at the helm of Salisbury High School after transitioning from the principalship Isenberg Elementary School.

The 43-year-old Moore’s career in public education started years ago when he was hired by Jerome Heggins as a physical education teacher at Isenberg. Moore quickly rose to the top of the school. He was assistant principal at Isenberg after four years and principal in eight. He was named principal at Salisbury High at the end of June.

A Hertford County native, he played high school basketball and began attending Catawba College in 1995, and he was good. He was South Atlantic Conference Athlete of the Year, MVP, All-Region and All-America in 1999. Moore was inducted into the conference Hall of Fame in 2003.

Moore has expounded a philosophy of respecting everyone as part of his leadership style with an emphasis on developing positive relationships. He wants to learn each student’s name and make them, and staff, feel they can call on him if they need help.

His biggest hope for the coming year is for the COVID-19 pandemic to end.

His other hope is that the world can return to a sense of normalcy.

“This is a new norm for us,” Moore said “I’m sure there are those who say we will never get back to what we used to do, but that is not always a bad thing,” Moore said.

Moore, a man of faith, has learned from 2020 as well. Growing up, Moore says he would often pray, projecting what he wanted, but rarely had to do it while facing dire circumstances.

Moore saw the fallout of the pandemic impacting millions of people in the country combined with social unrest resulting police violence against Black people. Sometimes, Moore says, he felt helpless and does not know how some people managed to get through 2020 without a higher power to look to.

In 2020, some of his prayers were projections of what he wanted to happen, but other times he prayed for comfort and for things to happen immediately.

“In my life I learned way more the value of what prayer is and the power of hit,” Moore said.

He hopes students will be able to restore themselves coming into the new year and do not miss out on opportunities he was afforded growing up.

“The losses that people took this year are going to be insurmountable to some people,” Moore said. “I’m hoping there will be opportunities to restore them some of the things they’ve lost.”

Who would play you in a movie? Idris Elba
What would you want for your last meal? Anything that my wife would prepare, as she is a wonderful cook. My mama’s collard greens have to be on the menu.
What’s your biggest personal hope and challenge for 2020? To see how I can best support our families and friends who were affected in so many different ways by the pandemic.
Who’s a person you’ll be watching in 2020? T.D. Jakes and Joe Biden
What would you do if you won $10 million? I’d make sure that my family would see some of the things that were never afforded them in their past. I’d also try to give my children a much better head start on being lenders and not borrowers.
What’s your reaction to being named as one of the Post’s 10 to watch? I couldn’t believe it. I consider it an honor and hope that I can inspire and create a positive impact in the lives of the people that I come in contact with both directly and indirectly.