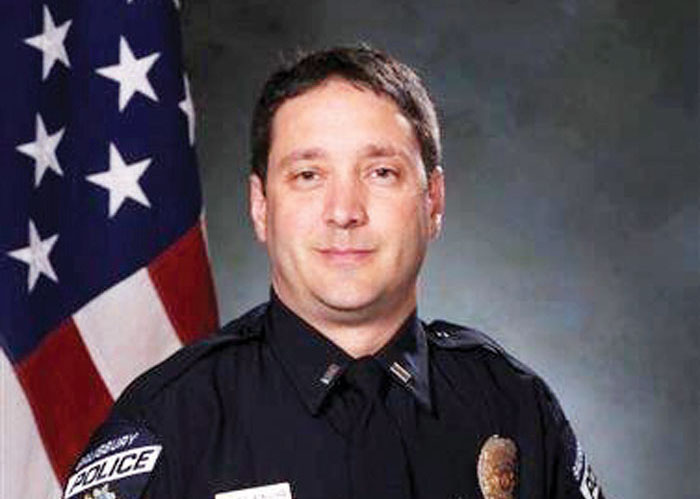 SALISBURY — Brian Stallings began his law enforcement career with the Salisbury Police Department in 1996 as a patrol officer, and was named deputy chief in late December.

In 2014, Stallings was promoted to captain with the department and has since managed the department’s administrative division, which included internal affairs, hiring and recruitment, records management and the Commission on Accreditation for Law Enforcement Agencies, which is a credentialing authority.

He currently directs the department’s patrol bureau that includes the traffic officers, the first responder and K-9 officers.

In 2016, Stallings served as the interim police chief for several months after the retirement of former police chief Rory Collins.

Chief Jerry Stokes began the search for a deputy chief following the August resignation of then Deputy Chief Dr. Shon Barnes, who left for a job in Chicago.

The police department received more than 20 applications for the deputy police chief position. Stokes told the Post some of those were from within the department. Of those 20 applicants, seven made it to the final round of consideration. Members of the community and the Chief’s Advisory Board served as panel members during the interview process.

Following his decision to appoint Stallings, Stokes said he found Stallings demonstrated strong leadership while he served Salisbury citizens with a caring spirit.

In addition to his educational accomplishments, he has an Advanced Law Enforcement Certification from the North Carolina Justice Training and Standards Commission, and was previously named the department’s “Veteran Officer of the Year.”

Stallings also served on the board of Prevent Child Abuse Rowan.

Those that know me will undoubtedly tell you I’m not as in touch with modern entertainment as the average person. They will also tell you I love the corny comedies of the ’80s and will regularly quote them when the opportunity presents itself. Life’s too short to not enjoy a great laugh. To answer your question, if he was still alive, I would be ecstatic if Leslie Nielsen would play the role.

What’s your biggest personal hope and challenge for 2021?

As I’m sure it is on everyone’s wish list, I would hope for a swift eradication and recovery from the COVID-19 pandemic. Personally, I’m ready for all of this to be behind us. Too many people have suffered and many sacrifices have been made. Let’s honor those we have lost and start the road to recovery. Professionally, the lack of social interaction from it has impaired our ability to interact with the community and continue our community engagement initiatives. This is important to our mission as we need to foster strong relationships with those impacted by crime so we can work together to combat it. COVID-19 has challenged our recruitment efforts as well and we will be looking for creative ways to attract great candidates in a highly competitive market.

Not just because he is my boss or the fact that he trusted me enough to promote me, I am very excited to see what Chief Jerry Stokes has to offer in 2021. He is a man of integrity and resolve that is truly needed as a leader of a modern law enforcement agency. Since he has arrived in Salisbury, he has implemented much-needed policy change that ensures both internal and external organizational accountability. He has advocated and been instrumental in obtaining funding for quality in-service training for our officers. Even amidst a budget crunch, he found creative ways to get our city connected to valuable federal training assistance. His dedication to the new age of policing has led us to a change in the way we allocate police resources. By utilizing data analysis, we have a true scientific way of getting our attention to where it will be the most effective.

Organizational change is always challenging and can be difficult, but Chief Stokes led the charge to make these changes exciting for us.  I am looking forward to see how we will advance further under his leadership in 2021.

My family and close friends would receive a sizable amount of money to use as they wish.

I would set up a self-sustaining foundation that would offer annual educational scholarships to children of local law enforcement personnel. There are limited financial aid options out there for middle-class income workers, and I would like to help make education attainable for families in my profession.

I would love to set up another self-sustaining fund that would allow me to travel around the world and interact with people. I would go out of my way to give no appearances of wealth and see how people treated me. Monthly, I would select a person to engage with. If they receive me with kindness and a non-judgmental attitude, they would receive a nice “Golden Rule” reward.

For me, I would build a swimming pool that doubles as a scuba diving playground. It would have a series of caverns and caves that are as close to the real thing as possible.

What’s your reaction to being named as one of the Post’s 10 to watch?

East Spencer to take a closer look at street…