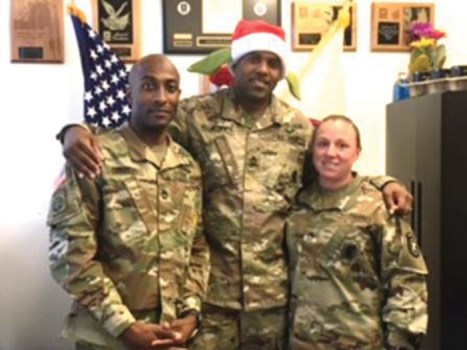 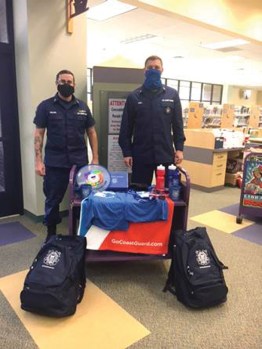 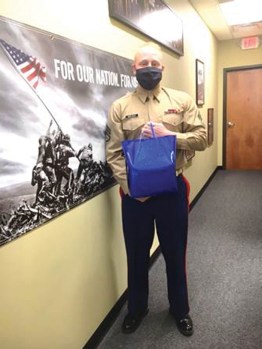 Staff Sergeant Nolan Brewer poses with a delivery of cards for service members in the Marines. Photo submitted.

CHINA GROVE — With her daughter attending school virtually from home three days a week, Tammie Foster took the opportunity to teach her a math lesson.

Instead of solving arithmetic problems, Alexis, age 9, was recruited to help her mother count the thousands of envelopes that had been submitted for the Rowan County Public Library’s Cards for a Cause initiative.

Started in 2015 by Holly Shue at the eastern branch, Cards for a Cause is a campaign in which library staff collects cards of well-wishes written by members of the community and distributes them to service members and veterans of the United States military.

Foster was involved in the program from the beginning, but said that the responsibility for coordinating the program eventually “fell in her lap.” She wouldn’t have it any other way.

“This had been the most rewarding thing,” Foster said. “It’s been awesome to see our community come together and take time to write a word of encouragement to those who are away from their families, especially this year.”

While Foster isn’t quick to take credit for championing the program, Library Services Manager Laurie Lyda said that Foster has been critical to the program’s success.

“She’s really taken ownership of the program over the past years and has really done a lot with it,” Lyda said.

In a typical year, Foster starts organizing the program in September and the first cards are submitted in October. In 2020, Foster started six weeks earlier, in August. She needed the extra time to organize for what she anticipated to be a challenging year.

As the campaign continued, Foster and her helpers kept receiving more and more cards, prompting her to turn her home office into a mailroom. By the end of the initiative earlier this month, Foster and her team collected and distributed 4,400 cards, exceeding even her most optimistic expectations.

“I was blown away,” Foster said. “I almost cried. I really did. You hear so many things that aren’t necessarily good news. But when you see this, it makes you feel good to know that people care about other people.”

The extra planning that Foster did in August was mainly to coordinate a take-home card-making kits that replaced the traditional card-making stations offered in the library’s various branches during the Cards for a Cause campaign.

Each kit included 10-20 cards, envelopes, labels and stickers, giving the participant everything they needed to write, decorate and package a card that would wind up in the hands of a service member somewhere in the U.S. or even outside of the country. Card makers can designate their cards to go to a particular branch, including the Army, Navy, Marines, Air Force, Coast Guard, and National Guard or to veterans at the W.G. Hefner VA Medical Center.

Once Foster collects the cards, she sends them out in two batches, one before Veteran’s Day and one early in December. The cards are sent to nearby military recruiters, who have the final say on where the cards go.

“They told me that they really try to get it in the hands of new recruits because it’s tough,” Foster said. “Especially because it’s their first Christmas away from family, not going home. I know a lot of them are going there.”

Despite the obstacles of coordinating Cards for a Cause in the midst of a pandemic, Foster felt like the program was more necessary than ever.

“I always hope that it encourages their heart to let them know that they matter, that we appreciate them,” Foster said. “… It’s really encouraging, especially during a year like this year.”

Each year, Foster has grown the initiative by collecting more cards. Since 2015, when 230 cards were submitted, the number collected has almost doubled each year. In 2019, there were 2,165 cards sent. Between card writers, card counters and card distributors, Foster estimates that about 500 people contribute each year.

This year, Cards for a Cause started with a strong base of 1,000 cards that had already been donated months before by Daisy-Wright Bryant of Lincolnton, whose chapter of the N.C. Order of the Eastern Star contributed 1,000 cards.

Another participant, whose husband served in the military, worked on cards throughout the year and donated 400 signed cards in the end. Boy Scouts of America (Packs 351 and 476), Kids Next Door Daycare Center, Millbridge Elementary, Shive Elementary, Rockwell Christian School,

For the first time since the program began, several members of the Coast Guard visited the Rowan Public Library – South Branch to thank the library workers personally for the cards.

“They brought all these goodies for staff,” Foster said. “It was really nice.”

Foster said that she is still processing the 4,444 cards that were collected and sent out in 2020, but once she’s recovered from that effort, she’ll start to think about how to top it next year.

Lyda said that she hopes the library can follow up this year’s success by breaking 5,000 next year.

The 2021 Cards for a Cause campaign won’t start officially until October, but Foster said that people can work on cards year round. She’s constantly working on the program, even in the offseason.