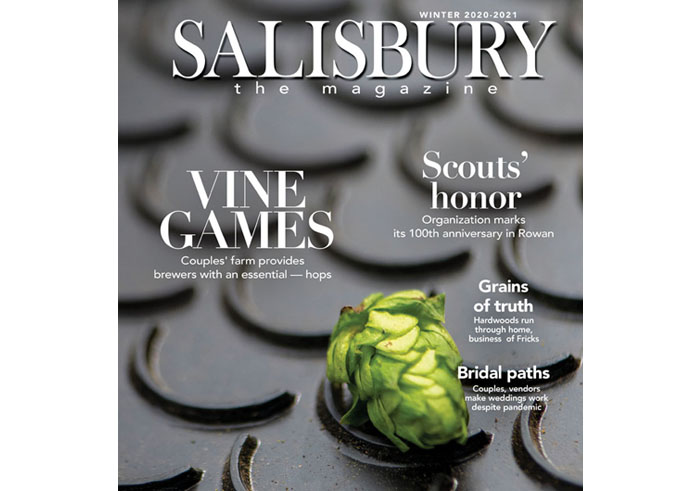 SALISBURY — The Winter issue of Salisbury the Magazine, a publication of the Salisbury Post, has reached subscribers and is available elsewhere at its normal distribution sites in Rowan County, while copies last.

The cover story relates to the enterprise of two Davie County couples whose farm is growing hops for craft beer brewers in the region. In a short time, Hoppin J’s Farm has become one of the biggest growers of hops in North Carolina.

The year to which we are saying goodbye marked the 100th anniversary of Boy Scouts in Rowan County, and this issue tells some of the local history of Scouting and the impact the organization has had on many generations of boys — and, yes, girls.

Guest contributor Diana Storey provides — as a mother of the bride — an inside look at how two big Rowan County weddings were pulled off in 2020, amidst all the precautions that had to be taken during the pandemic.

A lot of credit goes to flexible bridal parties and local vendors who found ways to make things work.

For the At Home feature, the Winter issue takes a peek inside the eastern Rowan County home of Andy and Machelle Frick. The couple relied heavily on woods that came from Andy’s long-established business, Blandy Hardwoods in Gold Hill.

Contributing writer Kris Mueller visits with both Brenda Zimmerman and Daniel Thrailkill, who each have a passion for old books. Brenda’s collection goes back to the 1700s, while young Daniel has made the refurbishing of well-worn Bibles a side passion of his.

Taking a dive into history, contributing writer Ben White recounts the Salisbury connection to infamous outlaw Otto Wood, who lost his life here during a shootout with police 90 years ago.

Elsewhere, the magazine catches up with Rowan Original Karen Leonard for a quick Q&A. In Bookish, Alissa Redmond of South Main Book Company offers up four of her favorite books from 2020.

The Through the Lens photo comes from Cortland Hunter, and Cherrathee Hager contributed the artwork for Salisbury’s the Place.

Salisbury the Magazine publishes nine times a year. The March issue should be reaching subscribers in mid February.