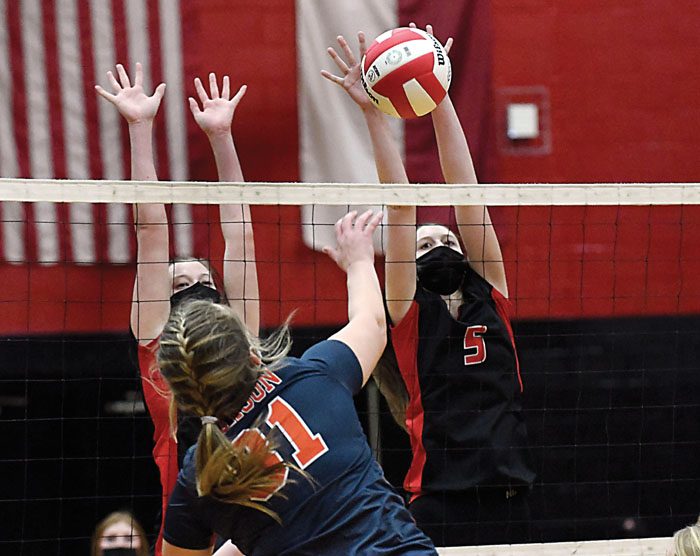 Carson's Jaden Vaughn (31) pounds a shot into the outstretched arms of South's Anna Rymer (5). Photo by Wayne Hinshaw, for the Salisbury Post

LANDIS—Carson senior Jaden Vaughn was marvelous again, and she got the help she needed on the road on Wednesday night.

Carson sophomore Gianna Patella made a nice play at the net to end the fifth set in an epic non-conference match between neighbors and rivals that careened and twisted deep into the night. It was a roller coaster. The Cougars knocked off previously unbeaten South Rowan 25-19, 27-25, 20-25, 17-25 and 18-16.

Carson had it won, blew it, and then somehow took it back. It was wild.

“South isn’t a bad team — they’re not bad at all,” Carson coach Kelan Rogers said. “But they’re not anything like what we see in our league. We should have swept them. We didn’t play well. If we play well, we sweep them.”

Carson’s league is the 3A North Piedmont Conference, which includes three exceptional squads in West Rowan, North Iredell and South Iredell. Carson (5-7) played those three teams twice each, which explains six losses. Carson also split with East Rowan. An early-season loss to the Mustangs still has Rogers tossing and turning through sleepless nights.

Round 3 for East and Carson will take place in the first round of the NPC tournament next week in the East gym. It will be a season-ender for the loser.

South’s league is the 2A Central Carolina Conference, a conference that the Raiders (11-1) have dominated with one co-championship and two outright championships over the last three seasons. South, which will get to play two CCC tournament games at home, hadn’t dropped a set this season, much less a match, prior to Carson’s visit.

Carson libero Kary Hales was the key figure in the first set with her fierce serves and constant digs. South was up 18-16, but then Hales and her teammates wouldn’t let anything hit the floor.

“Carson is good on defense,” South’s senior standout Anna Rymer said. “It was hard to score, a lot harder than it usually is for us.”

The second set was mostly about Vaughn. It was 12-all when the Lenoir-Rhyne-bound senior took over. She smashed four straight kills and her teammates eagerly climbed on her back. With South leading 25-24, Vaughn produced the tying and go-ahead kills for the Cougars. Then Carson took the set on a violation.

“Those first two sets we were really flat,” South coach Jenna Horne said. “Carson had more energy. We needed something to get us going.”

For a while, it looked like South would bow out quietly and quickly. Carson jumped all over the Raiders 6-0 with Hales serving to begin the third set.

Carson was still up 10-6 when it temporarily fell apart and slid behind 12-10.

“Six straight unforced errors,” Rogers said. “We were doing the scoring for them. All South had to do was get it back over the net and wait for us to make a mistake. We got scared and we got nervous.”

Vaughn doesn’t get nervous or scared. She started pounding again. Carson went up 19-17.

But when things looked bleak for the Raiders, sophomore outside hitter Cameron Black wouldn’t let South lose. She has some bounce and she got hot from the left side, sharply angling hits cross-court. She registered kills for South’s 22nd, 23rd, 24th and 25th points. The Raiders stayed alive.

“We got in a groove,” Horne said. “We started playing a lot harder. Carson is a good team, but we really should have won.”

South battered the Cougars in the fourth set, leading by as many as nine points, although many of Carson’s wounds were self-inflicted. Black got the kill that ended the fourth set and tied the match at 2-all.

South owned all the momentum going to the fifth set, which turned out to be a tremendous back-and-forth struggle. Vaughn and Rymer, two of the county’s best, stepped to the forefront. They traded blocks and kills.

With Carson up 14-13, a hit by South lefty Kendall Rockstad was barely in, and the Raiders staved off defeat.

At 16-all, Carson setter Tate Barger produced a go-ahead ace. Then Patella made the biggest play all night.

“I’m really happy and proud,” Vaughn said. “This is a very good win for us. It’s the first time we’ve lost the momentum like that and have still been able to come back to win. We’ve crumbled the last two years in matches like that. Tonight, we didn’t crumble.”

It was a hard-to-swallow loss for South, but it could pay dividends in the playoffs. South hadn’t seen any adversity all season, and at some point in the playoffs, the Raiders are going to see some. Now the Raiders know they can rally. They nearly pulled off a colossal comeback.

“That’s exactly what our coaches talked about after the match,” said Anna Rymer, who had 32 kills and 21 digs. “This can help us. We hadn’t been down like that. Now we know we can fight back. I was proud of how we fought back.”