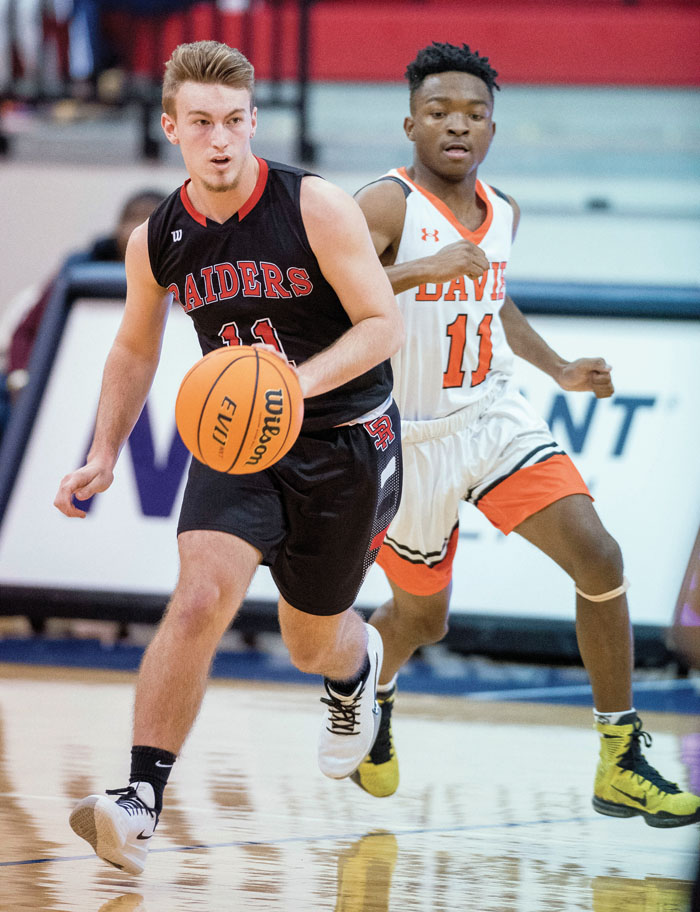 Second in a series on local basketball teams …

South is 15-60 overall in three seasons since moving down to the 2A Central Carolina Conference, including back-to-back 4-21 records. Before that, in the 3A South Piedmont Conference, it was even more of a struggle, so it’s been quite a while since the Raiders have been much of a factor on the hardwood. They’ll head back to 3A for the 2021-22 season, so they’re determined to stay upbeat and make the most of this COVID-shortened one.

Braden Graham, who led the county with 19.7 points per game as a junior and accounted for 38 percent of South’s scoring punch, transferred to West Rowan, but the Raiders still have five returning varsity players.

Marcus Hollman, a lean, 6-foot-4 forward, had his moments as a soph0more, including a nine-point effort in a win against East Davidson.

Jayden Dextraze, a 6-foot-4 post man, averaged a little over 3 points per game, but should have a much bigger season as a senior.

“Jayden has trimmed down and lost about 20 pounds,” Blevins said. “He’s gotten faster and his footwork has improved.”

Jacob Ritchie, a 6-foot-2 junior, was productive when he got a chance the second half of last season. He put up double digits against Lexington. He likes to bang inside and will be cast in a power forward role.

Ryan Woodman, a guard who didn’t play a lot in 2019-20, is the fifth guy with serious varsity experience. He’s taken on a leadership role as a senior.

“He’s a good athlete and he’s been a vocal guy who pushes his teammates in practice,” Blevins said.

Blevins worked to add athletes to the basketball roster, and the modified COVID schedule for this school year actually has helped. Basketball comes before football in the altered schedule, so guys like Thompson, who missed early basketball games last season, are a lot fresher.

With baseball season coming very late, there’s also a pool of baseball-first athletes who are eager to play a sport while they wait to get on the diamond. Blevins was quick to suggest basketball.

“We made a concerted effort to recruit our hallways,” Blevins said. “We’ve got a few kids who have gotten banged up in football, so they haven’t played basketball. And we got some pretty good baseball guys out here. The talent level at South is better than what I expected. We’re deeper than I thought we’d be.”

Blake Garrett, a 6-foot-3 senior who has experienced football injuries in the past, could be a difference-maker as far as South’s rebounding situation.

First cousins Nathan Chrismon and Jackson Deal are fast, baseball-first guys who have impacted the football program. Now they’ll be lending a hand to the basketball squad.

“Deal can defend,” Blevins said. “Chrismon is an all-out athlete, and he’s actually pretty good at basketball. Both of those guys will give us everything they’ve got.”

Ty Hubbard, a hustling junior baseball infielder, has been part of the jayvee basketball program and will provide some quickness.

So will Kane Kepley, a dazzling baseball prospect as an outfielder.

“Kane is super-competitive,” Blevins said. “Great hands and great eyes. He should be a nagging force on defense. He’ll get some steals.”

Also in the mix are junior guards Finch McMillan, a lefty, and Jackson Black. A recent roster addition was 6-foot-5 junior Carson Crainshaw, who will be the tallest Raider.

“We’re thin in our sophomore class, but we’ve got a lot of juniors and freshmen in the program,” Blevins said.

South is in a league that has some beatable teams but is generally quite good in boys basketball. North Davidson (12), Lexington (15), Salisbury (28), Ledford (29), Thomasville (35) and Central Davidson (39) finished among the top 40 teams in 2A in the final MaxPreps rankings.

Blevins, a native of Wilkes County and a graduate of Western Carolina, was most recently the middle school coach at Hickory Ridge.