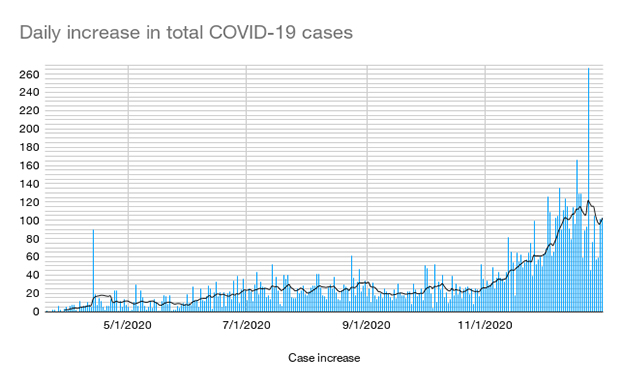 This chart, using data from the Rowan County Health Department, shows the progression of COVID-19 cases. Blue bars show daily increases in the number of positives. The black line shows the two-week average of daily increases.

Four of the deaths occurred outside of a congregate living facility, where a majority have occurred. The fifth was reported at Bethany Retirement Center, located on Salisbury Avenue in Spencer.

There have now been 172 deaths attributed to COVID-19 in the county, with 95 inside of nursing homes or residential care facilities and 77 that have occurred elsewhere. No further information was released about the deaths, except that the average age remains 79 for those who have died.

Hospitalization statistics were largely unchanged on Thursday, as 26 Rowan County residents remained in the hospital and 90 of the 110 beds allocated for COVID-19 patients in Rowan County were occupied (a number that can include people from elsewhere seeking care here). Two of 61 available ventilators are being used, according to Rowan County statistics.

With 103 new positives, Thursday marked a second triple-digit daily increase in a row after an erratic holiday period during which testing opportunities had been limited and daily increases had fluctuated widely. This year, there have been 8,825 COVID-19 positives in the county and 5,596 recoveries.

There are now 3,057 active cases in Rowan County, a number that’s more than two and a half times what it was at the start of the month. The sharp rise has been propelled upward by higher daily increases in COVID-19 cases and recoveries that are coming slower than in previous months.

Rowan County Nursing Director Meredith Littell said a recent increase in percent of tests coming back positive has slowed the process of COVID-19 investigations, which includes recoveries. In the previous two weeks, that number has been above 15%, noticeably higher than the average this year.

There have been 93,558 tests conducted in the county — a number that increased by more than 8,029 on Thursday after the county added negative tests from the previous two weeks. Even with the large addition in negative tests, the county’s percent of positive tests throughout the entire pandemic rose from roughly 8.73% two weeks ago to 9.43% on Thursday. That more tests are coming back positive of late has increased the percent positive during the entire pandemic.

The average of of people testing positive in Rowan County is 44.2.

Statewide, there were 6,715 new positives reported Thursday, bringing the total number this year to 539,545. There are 3,493 people being hospitalized in the state. A total of 6,748 have died.

There have been 6.9 million COVID-19 tests completed in North Carolina.