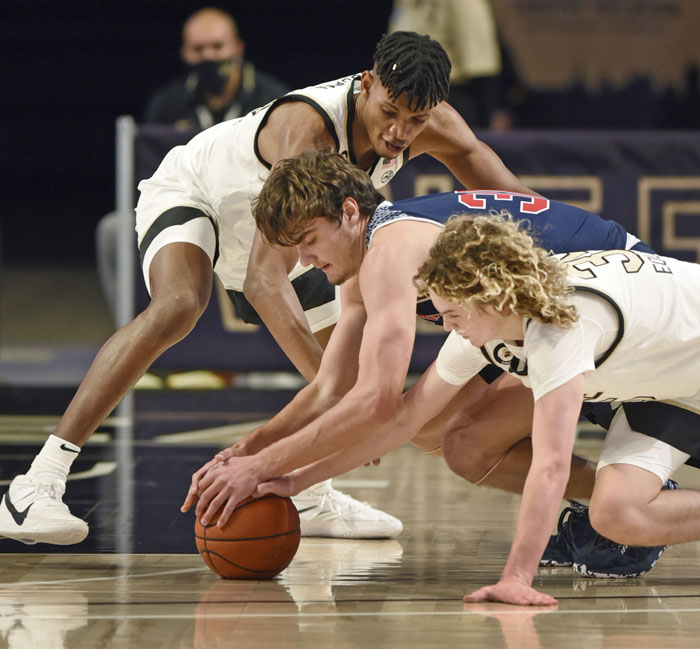 Wake Forest's Carter Whitt, right, and Ody Oguama, top, battle for the ball with Catawba's Ben Bowen on Thursday at Joel Coliseum in Winston-Salem. (Photo by Walt Unks/Courtesy of ACC)

From wire and staff reports

WINSTON-SALEM — Catawba’s men’s basketball team was down 21-4 after nine minutes, but still managed to turn Thursday’s exhibition matchup at Wake Forest into a competitive contest.

Wake Forest, returning to the court for the first time since November, held on to win 70-62 against the Division II Indians.

The game, televised by the ACC Network, was played mostly in front of empty seats at Joel Coliseum. Official attendance was 77.

Catawba’s early outings included a 33-point wipeout by D-II powerhouse Lincoln Memorial and an ugly home setback against rival Wingate, so this was a large step forward in a rebuilding season. Catawba won in overtime at Mars Hill on Dec. 19.

Catawba stayed in the game with its unbeaten ACC foe despite shaky shooting — 35.7 percent from the field, 5-for-19 on 3-pointers, plus eight missed free throws.

The Demon Deacons didn’t light it up with 43.1 percent on field goals, but they did make 20 of 25 free throws.

Catawba held its own on the boards and actually had an edge in offensive boards and second-chance points. Turnovers were virtually even.

Freshman Carter Whitt added 11 in his debut for the Deacons. Whitt, who arrived at Wake Forest nine days ago, graduated high school early and enrolled in spring semester classes. The point guard from Raleigh is the highest rated recruit for first-year coach Steve Forbes.

Wake Forest had games against Troy, Presbyterian, No. 17 Virginia, VMI and Syracuse canceled or postponed due to COVID-19. The Demon Deacons are scheduled to play Georgia Tech in an ACC game on Sunday.

After digging that huge early hole, Catawba battled back to a 32-30 deficit at the break.

The Indians trailed 62-58 with 2:04 left after a Terrence Whitfield free throw, but Mucius got a key offensive board and made three of his next four free throws as Wake Forest maintained a two-possession lead the rest of the way.

Catawba (2-3) is scheduled to play a South Atlantic Conference game at Queens on Wednesday and a home game against Tusculum on Saturday, Jan. 9.