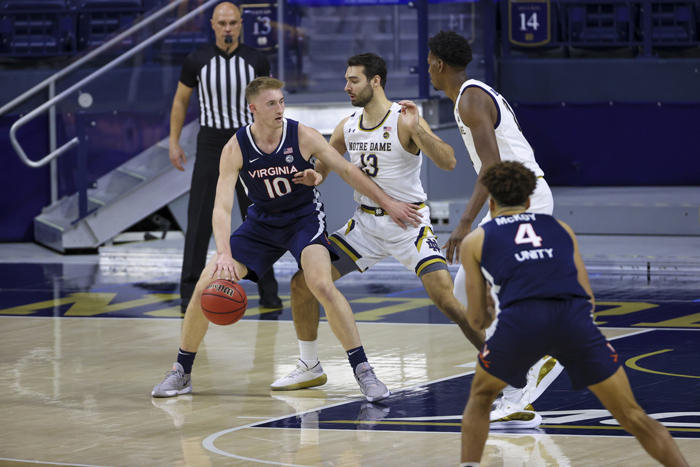 “Weebles wobble, but they don’t fall down,” Bennett said after the No. 23 Cavaliers relinquished almost all of an 11-point second-half lead, then pulled away late for a 66-57 victory over the Fighting Irish on Wednesday night.

“Our young guys don’t know what that is,” he said, “but we wobbled a couple times, but we didn’t fall down.”

Kihei Clark had 19 points and five assists as No. 23 Virginia continued its string of dominance over Notre Dame.

The Cavaliers (5-2, 1-0) improved to 12-0 in Atlantic Coast Conference openers under Bennett and 10-0 in ACC regular-season matchups against the Irish. Notre Dame (3-5, 0-2) fell despite a career-high 28 points from Nate Laszewski.

“Our two big guys did play great,” Notre Dame coach Mike Brey said. “We’ve got to build on that even though we didn’t win the game.”

The Cavaliers, after plunging from No. 4 in the preseason poll to No. 23 in the latest one, play six of their next eight at home as they look to climb back up the rankings.

The Irish extended their dubious program record for consecutive losses against ranked teams to 25, including 0-4 this season. They’ve not defeated a Top 25 club since edging No. 6 Wichita State 67-66 in November 2017.

The Cavaliers host No. 24 Virginia Tech on Saturday in a showdown between rivals next to each other in the rankings.

The Irish are scheduled to play Saturday at Pittsburgh, but the game remains in jeopardy after the Panthers’ contest against Duke on Tuesday was postponed when Pitt announced a positive COVID-19 test within its program

WACO, Texas (AP) — Macio Teague had 18 points to lead six players scoring in double figures for No. 2 Baylor, which picked up its second lopsided victory in a 23-hour span. Jared Butler added 17 points on 6-of-8 shooting and Matthew Mayer had 14 points for the Bears.

Baylor (8-0), the only Big 12 team without a loss, returned from its Christmas break with back-to-back midweek afternoon games.  Tyree Corbett had 24 points to lead Alcorn State (0-5).

COLUMBUS, Ohio (AP) — Ohio State’s Justin Ahrens came off the bench to score 18 points and freshman Zed Key added 14 points on 5-for-5 shooting as the No. 25 Buckeyes trounced the Cornhuskers.

ROCK HILL, S.C. (AP) — Chandler Vaudrin had 17 points, eight rebounds and five assists as Winthrop edged Campbell. Vaudrin made a free throw with 1:01 left for a 77-69 lead, and Winthrop hit 8 of 11 in the final minute to seal it. Charles Falden added 16 points for Winthrop (6-0, 3-0 Big South Conference). The Eagles attempted 50 free throws.

Nevin Zink tied a career high with 21 points and had 12 rebounds for the Spartans (0-9, 0-3). Dalvin White added 10 points and Bryson Mozone had seven rebounds.