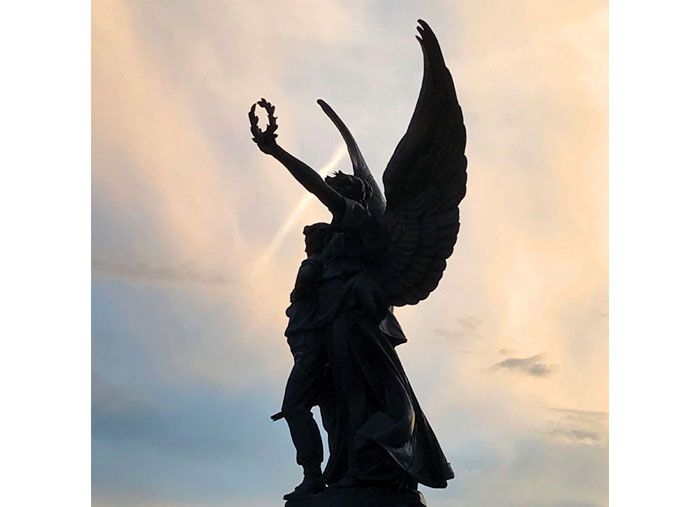 Fame at sunset on July 6, just before being removed from Innes Street. Photo by Andy Mooney, Salisbury Post.

SALISBURY — The year 2020 will be remembered by many as one where people were forced to navigate a “new normal” due to a global pandemic from a novel coronavirus.

But in Rowan County, a period of several weeks during the middle of the year were marked by nonstop protests, heated Salisbury City Council debate and an eventual decision to move the Confederate monument “Fame.”

After the killing of George Floyd, a Black man who died in Minneapolis after a police officer kept his knee on Floyd’s neck for several minutes, local protests quickly focused on the Confederate monument. Gunshots during protests and images of police in riot gear downtown prompted a curfew and state of emergency. Another result: the Salisbury City Council voted to approve a deal moving the monument from its perch in the middle of Innes Street.

At the end of each year since 1984, the staff of the Salisbury Post vote on a local person or thing that has made headlines and played a major role in local events. The Post has named the Confederate monument “Fame” its 2020 Newsmaker of the Year.

Conversations surrounding a potential move for the statue, formally located at the intersection of West Innes and North Church streets, are not new, as the statue has a history of being a flashpoint in the community. A 2015 mass shooting at a church in Charleston, South Carolina, prompted a nationwide debate about Confederate symbols because of beliefs espoused by the shooter online. The city debated moving the monument then but took no action.

After the statue was twice vandalized with paint in August 2018 and March 2019, another debate arose about its removal, including a public meeting that drew a crowd of attendees. While the city attempted to organize a discussion about that time about the statue’s relocation, Confederate groups refused to take part. No person has been charged in either vandalism incident.

Decades before either debate, local officials considered moving the monument elsewhere because of concerns related to traffic flow and its location in the center of the street.

Most recently, those who supported the relocation from the previous spot cited it as a symbol of racism and white supremacy that better serves its historic purpose in a cemetery or museum where its full historical context can be understood and appreciated. Proponents of Fame’s previous location, such as the Fame Preservation Group, declared it synonymous with downtown Salisbury, and revered it as a memorial of history.

The issue became a glaring conversation city leaders said they felt forced to confront when gunshots were fired into the air at the site of the statue amid a “Black Lives Matter” protest on May 31. Jeffrey Long, of Kernersville, was charged with firing those shots as well as with other crimes. Long stood with other supporters at the statue and is part of Confederate groups.

The following night, Salisbury Police used tear gas and riot gear to disperse a crowd protesting near the statue. The crowd became unruly after mistaking one of two men standing on the steps of St. John’s Lutheran Church for Long. The crowd chased the man away and were met by police in riot gear who were protecting the Rowan County Detention Center. Harvey Lee McCorkle III, of Salisbury, was charged after throwing a rock through the window of the Salisbury Post later in the night.

Those incidents prompted Mayor Karen Alexander to impose a curfew and a state of emergency for the downtown area.

Swaths of the community called the statue a “lightning rod” and a public safety issue, forcing the council to confront calls for its removal as well as a deep love espoused by others. Pushing the council toward removal were public comments expressed during meetings that had moved virtual because of the pandemic as well as Mayor Pro Tem Al Heggins, who made an impassioned plea during a June 3 meeting that the council not simply move on with other business.

“We got statements tonight about the preservation of lives and the value of Black and brown people in this city,” Heggins said during the meeting. “And I think the least we can do as a council, if we truly represent everybody in this city, is to say, ‘We hear you.’ And not just move on like nothing has been said to us tonight.”

With an assist from community members, the city finalized a deal without the need to go to court. Less than two weeks after the shooting incident, the city announced a tentative deal with the Robert F. Hoke chapter of the United Daughters of the Confederacy, which owns the statue, to relocate “Fame” to a historic cemetery on North Lee Street where tombstones of Confederate soldiers sit.

The agreement made the city responsible for the cost to remove, store and relocate the statue, ultimately granting the UDC full ownership of the new site. Local philanthropist and descendant of one of the original UDC members who dedicated the statue Ed Norvell raised approximately $65,000 to cover the costs of maintenance and site amenities, including security cameras, an 8-foot wrought iron fence and lights. The Historic Salisbury Foundation was named the fiduciary agent in overseeing those funds.

Days later and after hours of public comments, the Salisbury City Council voted unanimously on June 16 to declare the “Fame” Confederate statue a public safety issue and allow the local UDC chapter 10 days to agree to a deal that relocates the statue on the city’s dime.

On June 22, the UDC signed the agreement. On July 6, city officials paid to remove the statue that currently sits in an undisclosed storage location. The UDC received an easement to the piece of property the monument will soon sit, while the Historic Salisbury Foundation will oversee privately raised funds for site amenities.

Retired Catawba College history professor Gary Freeze said the relocation showed that the statue is “many things at once” as the community reconciled with the idea that a new era has arrived. While it was initially designed to honor fallen Confederate soldiers, it was also something meant to represent beauty.

But fundamentally, it’s still a “ghost of the lost cause,” and even those who were upset by the relocation have to acknowledge “times have changed,” he said. It’s a story of the new century.

“Salisbury did what it’s always done best: it drags its heritage along with it,” Freeze said. “We haven’t obliterated the memory but altered its centrality in the community.”

While Salisbury was one of many locations confronting such an issue this summer, city leaders praise Salisbury for its distinct, local deal that relocated the statue with a community-led effort rather than outright removal, as was the case across the river in Lexington.

“When you come together as a community and come to a consensus, not everyone is going to be happy,” Alexander said. “But then the best thing for community can happen out of that.”

Alexander praised council members for unanimously agreeing on the relocation despite their various perspectives on the issue.

Freeze said, though issues of racism continue to persist, the city’s decision was an announcement that it’s time to be inclusive and continue these conversations as we move forward.

Norvell said he was proud of the community effort involved and that it was dealt with sensitively and with the advice of the Historic Salisbury Foundation, the Rowan Museum and Freeze.

Norvell said talking with community members, particularly Black residents and the local chapter of the NAACP, allowed him to see the statue through their eyes, which led him to believe relocating the monument and taking it out of the center of downtown controversy was best.

“As long as it was where it was — prominently where it was in our city — it was always going to be a point of contention,” Norvell said.

Salisbury-Rowan NAACP President Gemale Black said the relocation was necessary for an inclusive city, especially in an area that will soon be thriving with the Bell Tower Green Park. Additionally, its former location didn’t allow locals to read the writing and appreciate the statue in its historical context, he said.

Black vocalized the chapter’s support for the relocation and was among the community leaders present the evening that shots were fired into the air on May 31.

“We didn’t need anything to remind us of the dark days we went through when we’re trying to move forward,” Black said. “The impact is that it’s a new day in Salisbury.”

Today, the “Fame” monument remains in an undisclosed location. Its relocation is waiting for work to be completed on site amenities at the North Lee Street cemetery.