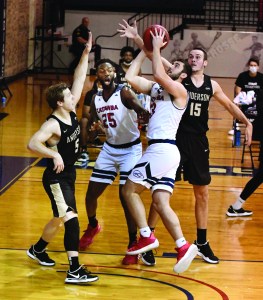 Catawba men’s basketball team is scheduled to take on Wake Forest at Joel Coliseum on Thursday afternoon at 3 p.m.

The contest will be televised by the ACC Network.

A strong D-II squad in recent seasons, Catawba (2-3) has been up and down this season with a lot of new faces. The Indians did win their most recent outing prior to Christmas at Mars Hill.

Wake Forest (2-0) will be returning to action for the first time since Nov. 27 and is looking for a tuneup before it plunges into ACC play.

Wake paused team activities Nov. 30 through Dec. 20, when the team restarted practices. The Deacons had two games canceled  and three more postponed, including ACC games against Virginia and Syracuse.

Wake Forest redshirt freshman Tariq Ingraham will miss the rest of the season as he recovers from COVID-19. Guard  Ian DuBose is out indefinitely because of an undisclosed condition.

Catawba and Wake Forest haven’t met on the hardwood since the 1945-46 season when the Indians were wiped out 59-27, so it’s a historic game in that sense.

In the first meeting of the programs in 1929-30, the Indians struggled in a 28-10 setback that is still tied for the school record for fewest points scored by Catawba.

Catawba notched a win over Wake Forest in the 1932-33 season.