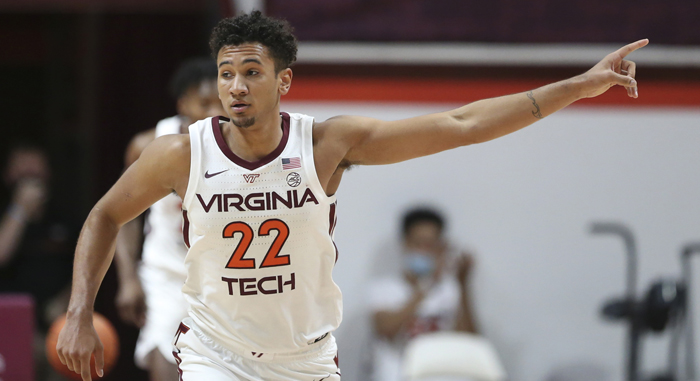 BLACKSBURG, Va. — Picked to finish 11th in the ACC in the league’s preseason poll, upstart Virginia Tech will enter 2021 with at least a share of the top spot in the conference standings.

Keve Aluma scored a career-high 26 points and No. 24 Virginia Tech made crucial free throws in the final minute on the way to an 80-78 victory over Miami on Tuesday night.

“I don’t really know if I’m surprised,” Aluma said of the Hokies’ hot start. “I don’t think anyone is really super worried about rankings. I think we’re all just trying to come out and take each game one at a time.”

Justyn Mutts added 15 points for Virginia Tech, which made three free throws in a sloppy final 37 seconds to hold off the ‘Canes (4-3, 0-2). Isaiah Wong and Matt Cross paced Miami with 16 points apiece.

WACO, Texas (AP) — MaCio Teague scored 20 points on 9-of-13 shooting  and Davion Mitchell had 12 assists as the Bears had helpers on 25 of their 37 field goals while remaining undefeated.

West Virginia had added the game after Buffalo canceled due to COVID-19 concerns. It was the only game on West Virginia’s schedule over a 10-day period.

CLEMSON, S.C. (AP) — Clyde Trapp scored 15 points and Nick Honor had all his 13 points in the second half, including the go-ahead 3-pointer, as Clemson rallied to upset the No. 18 Seminoles.

The Tigers (7-1, 1-1 Atlantic Coast Conference) were down 36-29 when Balsa Korprivica had a layup to start the second half. That’s when things began to turn for Clemson. Honor, a transfer from Fordham, broke a tie that put Clemson ahead for good with a 3-pointer with 7:01 to play.  Florida State (5-2, 1-1) lost for the second time in three games.

Kentucky looking for answers after worst start in 94 years

Kentucky’s win total shockingly stands at one. Coach John Calipari insists his Wildcats can rebound and be a contender this season.

With 19 scheduled games remaining in this coronavirus pandemic-shortened season, the Hall of Fame coach isn’t panicking about Kentucky’s 1-6 start, its worst since the 1926-27 squad began 1-8.

The combination of a challenging nonconference slate and growing pains on both ends of the floor by Calipari’s latest freshman-laden roster has translated into six consecutive losses. The skid is the longest in Calipari’s 12 seasons in Lexington, and Kentucky has fallen out of the Top 25 after starting the season ranked 10th.

“They’re fighting, they’re defending, they’re rebounding,” Calipari said Monday during a teleconference. “We turn it over too much, we’re working on that. The biggest thing, we miss a lot of shots, but our execution on offense has got to get better and we got time to continue to work on it.”

Kentucky’s stumble has sparked concerns in the Bluegrass state. Frustrated followers on social media and sports talk radio have questioned the caliber of a consensus No. 1 recruiting class, Calipari’s reliance on the highly touted freshmen, the “one-and-done” culture and even his coaching.

Arizona was accused of  violations that included a lack of institutional control. Arizona is off to a 7-1 start this season and the ban includes the Pac-12 tournament.