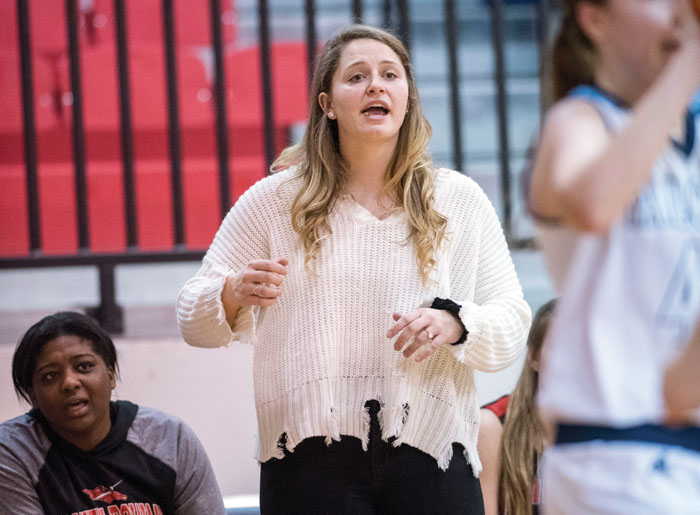 This is the first in a series of high school basketball previews.

LANDIS — Bethany Rymer’s decision to concentrate on her cross country/track and field career means the Raiders subtracted a guard who finished third in the county in scoring last season.

Still, second-year coach Alex Allen is as upbeat and optimistic as ever.

She believes South can be better and more competitive than it was in 2019-20 when it posted a 4-21 record and lost by 19 points on an average night.

Allen’s high hopes start with sophomores Mackenzie Chabala, who averaged 6.9 points per game, and Madilyn Cherry, who averaged 6.3. They were South’s second and third scoring options as raw freshmen, kids who were making the giant leap from middle school to varsity competition.

Chabala is tough and active and can be productive as an undersized, 5-foot-7 post player. Cherry, the 5-foot-8 point guard, will handle the bulk of the ball-handling duties, but she’ll also be asked to score in double digits.

“She loves the game and her energy pulls people in who will follow her,” Allen said. “She’s been a lot more vocal as a sophomore.”

Seniors Carlie Moore (3.1) and Paige Chabala bring lots of experience to the table. Chabala isn’t afraid to battle taller people and is at her best on the defensive end of the floor. Moore has been an all-county track and field performer and is a solid athlete and defender.

“Those four veterans have been giving us some great leadership at practice,” Allen said. “They’ve all improved as ball-handlers.”

Most nights in the planned 14-game 2021 season are going to be an uphill fight for South. This team won’t resemble some of those strong Carson squads Allen got to play on a few years ago.

There are no juniors on South’s roster, and a vacant class is hard to overcome. There’s also no jayvee team, so freshmen and sophomores will to have to suffer growing pains at the varsity level.

A pleasant surprise for Allen has been the unexpected appearance of senior twins Bailey and Rachel Webster, who haven’t played competitive basketball since the eighth grade.

South isn’t likely to light up the scoreboard, so defense is going to be critical. That’s the area where Allen believes the Raiders have made the longest strides from a year ago.

South is scheduled to get the season started on Jan. 6 against a rebuilding West Rowan squad that graduated all five starters. Allen expects there to be a limit of 25 fans for game, the same as it’s been for volleyball.

“We’re super-young.” Allen said. “But we’re going to make the most of this season. We’re going to keep building a program.”

“It’s a great group of girls and they’re willing to work hard,” Allen said. “I think we’re going to play with some scrappiness.”