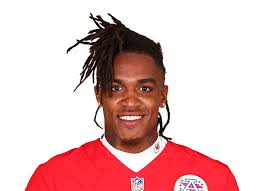 KANSAS CITY, Mo. (AP) — Kansas City clinched the top seed in the AFC and the only playoff bye when Patrick Mahomes threw a 25-yard touchdown pass to Demarcus Robinson with just under two minutes for a 17-14 win over Atlanta on Sunday.

The Chiefs had to watch as Pro Bowl kicker Younghoe Koo missed a tying field-goal attempt with 9 seconds left to escape.

The Chiefs (14-1) won their NFL-record seventh straight one-possession game and matched a franchise record with their 10th straight win. They took any seeding drama out of games involving Pittsburgh and Buffalo and will have that coveted first-round AFC bye when the postseason begins in two weeks.

The Falcons (4-11) took the lead when Matt Ryan hit Laquon Treadwell for a 5-yard touchdown with 4:33 to go. But Mahomes kept finding Travis Kelce — who had a record-setting game of his own — to set up the TD pass to Robinson. And when the Falcons marched the other way in the closing seconds, Kansas City’s defense forced Koo’s 39-yard kick.

Instead of heading to overtime, the Falcons headed home with their seventh loss by six points or less this season.

Mahomes finished with 278 yards passing and two touchdowns along with an interception. Kelce had seven catches for 98 yards and a score, giving him 1,426 yards for the season, breaking George Kittle’s record for an NFL tight end.

PITTSBURGH (AP) — Ben Roethlisberger overcame a month-long malaise to throw for 342 yards and three second-half touchdowns as the Steelers locked up the division title.

Listless and lifeless for weeks thanks to a three-game losing streak that followed an 11-0 start, Pittsburgh (12-3) somehow got it together over the final 25 minutes against the Colts (10-5). Indianapolis missed a chance to inch closer to a playoff berth when it let a 17-point third-quarter lead slip away.

Roethlisberger, who looked uneven at best and ineffective at worst during Pittsburgh’s recent slide, snapped out of it. He ditched the dink-and-dunk approach that had worked during the early portion of the season but became far too predictable during a December swoon.

The 38-year-old quarterback kick-started the comeback with a 39-yard strike to Diontae Johnson and brought the Steelers within a touchdown on a 5-yard pass to Eric Ebron. He gave Pittsburgh its first second-half lead since Dec. 7 when he audibled into a play that ended with Roethlisberger threading the ball between two Colts to JuJu Smith-Schuster from 25 yards with 7:38 to play.

Indianapolis, so dominant during a first half in which it outgained the Steelers 206-28, had two chances to reclaim the lead in the fourth quarter. The first drive ended with Philip Rivers throwing an interception deep in Pittsburgh territory. The second ended with Rivers’ heave to Zach Pascal sailing high on fourth down.

Seattle (11-4) earned its first division title since 2016 and its fifth since Pete Carroll arrived in 2010 behind a stellar defensive effort and a clutch late drive engineered by Wilson.

Seattle’s quarterback scored on a 4-yard run on the opening drive of the second half for a 13-6 lead. But the final drive was Wilson at his best: Wilson was 5 for 5 for 59 yards on the drive, hitting four different receivers.

Wilson connecting with Hollister was a bit of redemption for the tight end who was stopped inches short of the same end zone on the final play a year ago in Week 17 against San Francisco. That gave the division title to the 49ers.

Wilson finished 20 of 32 for 225 yards. But unlike earlier in the season when it was Wilson that staked Seattle to a 5-0 start, this victory was carried by the defense. Seattle flustered Jared Goff, shut down the Rams’ run game, and held Los Angeles (9-6) to a season low in points.

LANDOVER, Md. (AP) — Dwayne Haskins turned the ball over three times before getting benched, Steven Sims muffed a punt return that turned into a Panthers touchdown and Washington blew its first chance to clinch the NFC East.

Haskins was 14 of 28 with a fumble and two interceptions after starting in place of injured veteran Alex Smith, despite violating COVID-19 protocols last week. After being stripped of his captaincy and fined $40,000 for partying without a mask, he was stripped of the ball by Marquis Haynes in the first quarter and picked off by Tahir Whitehead and Tre Boston in the second.

Meanwhile, Washington’s defense allowed two Panthers touchdown drives and 202 yards in the first half alone. Had there been fans at FedEx Field, they would have booed Washington (6-9) off the field at halftime.

Down 14 early in the fourth quarter, coach Ron Rivera pulled Haskins and handed the ball to Taylor Heinicke for his first NFL action since 2018 with Carolina. Heinicke was 12 of 19 for 137 yards in relief and threw a 29-yard TD pass to J.D. McKissic with 1:50 left.

The Cowboys (6-9) won their third consecutive game and still have a chance to win the division thanks to Washington’s 20-13 loss to Carolina, which guaranteed that the NFL’s worst division won’t have a team with a winning record.

Dallas can overtake Washington (6-9) with a win at the New York Giants and a Washington loss to the Eagles on the final weekend of the regular season. The Giants (5-10) can get in by beating the Cowboys if Washington loses.

The Eagles (4-10-1) led 14-3 in the first quarter after DeSean Jackson’s 81-yard touchdown catch in his first game in two months coming off an ankle injury, and they would have controlled their playoff chances against Washington with a win.

BALTIMORE (AP) — Lamar Jackson directed four scoring drives during the decisive first half. Baltimore’s fourth straight victory, combined with Pittsburgh’s win over Indianapolis, lifted the Ravens past the Colts in the AFC wild-card hunt. With a victory in Cincinnati next week, the Ravens (10-5) will earn a playoff berth for the third year in a row.

The Giants (5-10) lost their third straight and were left with only a miniscule chance of making the postseason.

Jackson guided the Ravens to touchdowns on their first two possessions, then took them into field-goal position on his next two drives for a 20-3 halftime lead.

That was more than enough to defeat a struggling Giants team that totaled only 13 points in its previous two games and has scored just two touchdowns over the past three weeks.

Daniel Jones started at quarterback for New York after missing two of the past three games with hamstring and ankle injuries. His passing numbers — 24 for 41 for 252 yards — were reflective of the heavy pressure he received from Baltimore’s relentless rush.

The Ravens had six sacks, and Jones was flushed out of the pocket on several other occasions.

EAST RUTHERFORD, N.J. (AP) — After this loss, the Browns will need to beat the archrival Steelers next Sunday if they’re going to end the NFL’s longest playoff drought.

On fourth-and-1 with 1:18 remaining and the short-handed Browns (10-5) driving for the potential tying score, Mayfield tried to push forward for a first down. He lost the ball when Tarell Basham smacked into him. Kareem Hunt recovered, but by rule, Mayfield was the only one who could advance the ball — and the quarterback was short of the first down.

The Jets (2-13) sealed their second straight victory after an 0-13 start, losing all chance for the top overall draft pick.

It was a rough week for the Browns, who haven’t been in the postseason since 2002 and entered without seven players including Jarvis Landry and three other wide receivers, and rookie left tackle Jedrick Wills. Cleveland had to call up several players from the practice squad and coach Kevin Stefanski ran a walk-through in a parking lot near the team’s hotel to get some of the new players up to speed on the game plan.

Despite being short-handed, the Browns nearly erased a 20-3 deficit. But the Jets were able to hang on.

JACKSONVILLE, Fla. (AP) — The Jaguars took care of business, losing their 14th consecutive game and then getting some help to secure the No. 1 pick in the 2021 NFL draft.

Mitchell Trubisky accounted for three scores, including two touchdown passes to Jimmy Graham, and the Bears kept control of their postseason path. Chicago can make the NFC playoffs for the second time in three years by beating Green Bay next week at home — despite having gone through a six-game losing streak in 2020.

The Jaguars (1-14), who set a franchise record for consecutive losses, locked up the top pick for the first time in franchise history when the New York Jets beat Cleveland 23-16 a few minutes later.

That means the same day Jacksonville reached its worst skid in franchise history could end up being a potential game changer for the small-market team that’s spent the better part of the last two decades searching for a franchise quarterback.

The only thing standing between Jacksonville and Lawrence is the Clemson star formally turning pro, a decision that’s expected after the Tigers end their season in the College Football Playoff.

Chicago scored 28 unanswered points to start the second half, getting so far in front that Nick Foles got to close out the game against his former team.

INGLEWOOD, Calif. (AP) — Justin Herbert set the rookie record for most touchdown passes in a season. Michael Badgley tied a career high with four field goals, including the winning kick with 41 seconds remaining.

Herbert’s 9-yard screen pass to Austin Ekeler in the second quarter was his 28th touchdown throw of the season, surpassing the 27 that Baker Mayfield had for Cleveland in 2018.

Herbert, the sixth overall pick in the April draft and third QB taken, completed 21 of 33 passes for 253 yards. He also became the fourth player to throw for over 4,000 yards as a rookie, joining Andrew Luck, Cam Newton and Jameis Winston.

Badgley came into the game making three of his last seven on field goals, but was perfect on all four of his attempts Sunday. After Brandon McManus tied it at 16 with 2:47 remaining with a 52-yard field goal, the Chargers (6-9) drove to the Broncos 19, and the third-year kicker won it from 37 yards.

Denver (5-10) had tied it with scores on three straight possessions.

HOUSTON (AP) — Samaje Perine ran for two touchdowns, including a 3-yard score late, to give the Bengals their first road win in more than two years.

The Texans (4-11) were driving after Perine’s second score when Deshaun Watson was sacked by Sam Hubbard, who forced a fumble that Margus Hunt recovered. The Bengals added a field goal to seal the victory.

It’s the first road win for second-year coach Zac Taylor and the first time the Bengals (4-10-1) won away from Cincinnati since a 37-36 victory at Atlanta on Sept. 30, 2018. The Bengals have won two games in a row for the first time this season after upsetting the Steelers 27-17 on Monday night.

Brandon Allen returned after missing last week’s game with a knee injury and threw for a career-high 371 yards with two touchdowns for the Bengals.

Tennessee (10-5) squandered an opportunity to clinch its first AFC South championship since 2008. The Titans still can clinch a division title and their second straight playoff berth by winning at Houston (4-11) next week.

Adams’ three touchdown catches gave him 17 this season, one off the Packers’ single-season record that Sterling Sharpe set in 1994. Adams, who caught 11 passes for 142 yards Sunday, leads the NFL in touchdown receptions despite missing two games with a hamstring injury.

The Packers’ defense also played well while picking off two passes from Ryan Tannehill, who went 11 of 24 for 121 yards. Tennessee’s Derrick Henry rushed for 98 yards on 23 carries, ending his streak of nine consecutive road games in which he’d run for at least 100 yards.