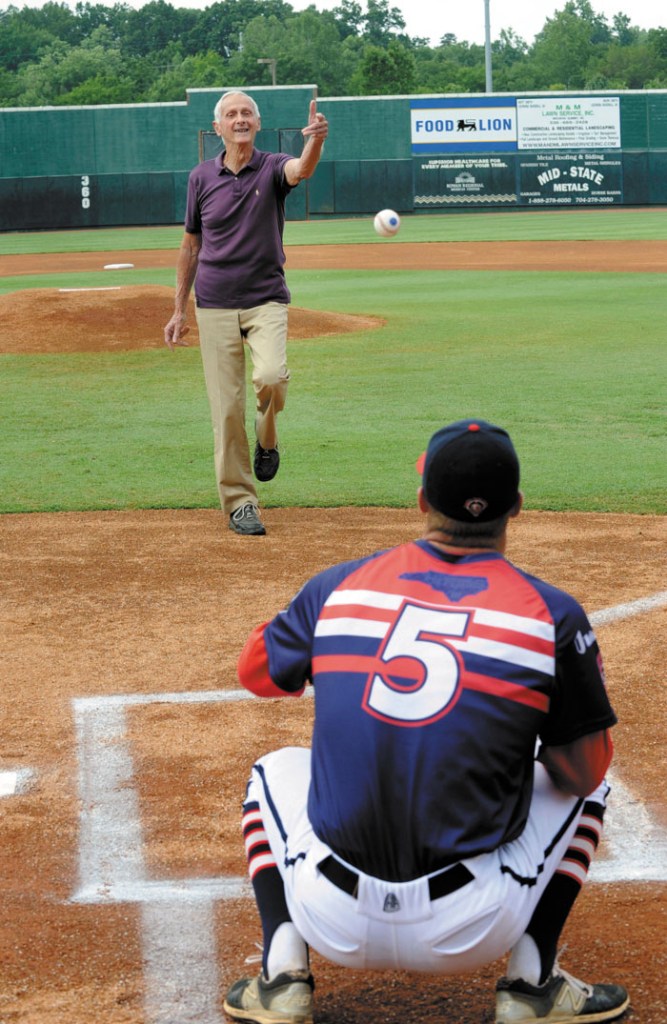 Tommy Eaton tosses out the first pitch when he was honored at an American Legion game. (File photo by Wayne Hinshaw, for the Salisbury Post)

SALISBURY—  The triumphs of the 1955 Salisbury American Legion team that led to the program’s appearance in the American Legion World Series in Minnesota have been well-documented, but much less has come to light over the years about the remarkable state championship achieved by Salisbury’s Boyden High in May of that year.

Both of those teams were coached by Joe Ferebee. One thing they had in common was a 129-pound left-handed pitcher named Tommy Eaton.

Eaton was quite literally a one-man pitching staff for Boyden’s Yellow Jackets in the spring of 1955, firing complete games in all 12 of Boyden’s league contests in the 3A Western Conference. The league included strong clubs such as Charlotte Central, Greensboro, Winston-Salem R.J. Reynolds, 1951 state champ Burlington, and Gastonia, which had won consecutive state titles in 1953 and 1954.

High school games were played on Tuesdays and Fridays during a relatively short season. Pitch counts weren’t considered relevant. Eaton either struck out hitters or walked them, for the most part, so he  threw a mind-boggling mountain of pitches. He was not only able to handle it; he thrived on a workload that would be considered overwhelming and extremely unhealthy today.

Over at Granite Quarry High, where the Dragons were putting together a 29-game winning streak over a dominating two-season stretch behind pitcher Jay Ritchie and catcher Virgil Bernhardt, Ritchie got a bit more mound assistance, but he still carried most of the load.

It wasn’t until Boyden reached the best-of-three state championship series against Wilmington’s New Hanover High that things really got dicey for Ferebee and Eaton, as those games were scheduled for nine innings and the championship format was Friday-Saturday-Monday. That series would basically come down to one clutch pitch. Eaton executed it.

Boyden hadn’t taken an outright conference title since it fell to Durham in the state finals in 1939, so the Yellow Jackets were considered an afterthought in the conference race, especially after two early setbacks. Gastonia’s Roger Sheppard, who would  win 17 pro games in the minor leagues in 1956, tossed a no-hitter to beat Eaton 3-0. Reynolds star Jerry Alley topped Eaton 2-0.

There were upsets in the league. When Boyden managed to edge Greensboro 3-2, it climbed back into the race.

Boyden and Gastonia had two losses each and R.J. Reynolds was 8-3 when the Yellow Jackets faced the Demons in a payback game. That game was a 1-0 struggle between Eaton and Alley, but Eaton prevailed with a three-hitter, striking out eight and walking two. Peacock’s double plated the only run.

The final game of the regular season was played on a Monday, a makeup of a rainout. It was Boyden vs. Gastonia’s Green Wave for the league title and the right to play Wilmington for the state crown.

Eaton started for the third time in six days and went the distance one more time. He pitched another three-hitter with 12 strikeouts. Boyden won 1-0 in the ninth inning when Hillard scored on a throwing error on a groundball hit by Eaton. That was Eaton’s fifth shutout of the season. Boyden players hoisted Eaton and Ferebee on their shoulders and carried them off the field.

After all, Wilmington had a four-man pitching staff. Boyden had one 129-pound southpaw.

Ferebee petitioned the NCHSAA to travel to Wilmington on Thursday, so his players could spend the night and be properly rested for Friday’s series opener. The NCHSA rejected that request, and so the Boyden players left on the bus at 6 a.m., for what was expected to be a six-hour trip. All of them but Eaton. Eaton’s father drove him to Wilmington on Thursday to get ready.

For the first time that season, Eaton was hit hard. Wilmington scored three runs in the bottom of the first to take a 3-1 lead. There were three straight hits, including a triple by leadoff man Bobby Moore, and then three wild pitches.

Brogden did not start Wilmington’s ace Harry Oldham in the first game. Boyden had seven lefty hitters and Oldham was right-handed, so Brogdon decided to throw a southpaw. That strategy made sense, but it didn’t work out. Boyden came back to win 5-3. After the first inning, Eaton settled down and allowed only three more hits. He shut out Wilmington the last eight innings and raised his record to 12-2.

Game 2 brought even more  drama. Eaton wasn’t asked to start on back-to-back days, but Ferebee counted on him to be available in relief.

Center fielder Smith got the start, taking the mound for Ferebee for the first time since the 1954 Salisbury American Legion season. Wilmington went to work with the bats, 13 hits and five walks against Smith, but Boyden also kept scoring. It was the first slugfest of the season. Boyden led 13-6 going to the seventh.

In the seventh, Wilmington scored three times to cut Boyden’s advantage to 13-9 and had two men on base when Ferebee finally called on Eaton. Eaton walked the first man he faced, and the tying run came to the plate. It was Moore, who had tripled off Eaton in Game 1 and had added a triple against Smith in the second game.

The count went to 3-and-2 on Moore, and Ferebee headed to the mound for a conversation with Eaton. Eaton said he was going to throw Moore a curveball because he would be looking for a fastball. Ferebee liked the confidence. That’s what he wanted to hear. He headed to the dugout and watched Moore swing and miss and strike out on Eaton’s gutsy, full-count curve.

That curveball was the moment of truth on May 21, 1955. Eaton sailed through the eighth and ninth for what would one day be called a save as baseball scorekeeping evolved. The final score was 14-9. Smith was credited with the win. Boyden owned a state championship, It’s still the only one the school, which became Salisbury High in 1971, has ever won in baseball.

The Greensboro Daily News produced the most influential high school sports section in the state in 1955. Eaton was named as the publication’s Athlete of the Week.

Hall of Fame sportswriter Tom Northington interviewed Ferebee, who told him this: “There’s an old saying that a pitcher is not a pitcher until he can come in there with the curve with the full count. When Eaton told me he was going to throw a curveball at Moore in the seventh, he became a real pitcher in my book.”

He had 15 wins and seven saves for the 1955 Legion state champs.

His high school efforts that came before that magical summer were just as impressive.