College football: ‘No better player per pound’ than Boyden star Bobby Weant at UNC in 1940s 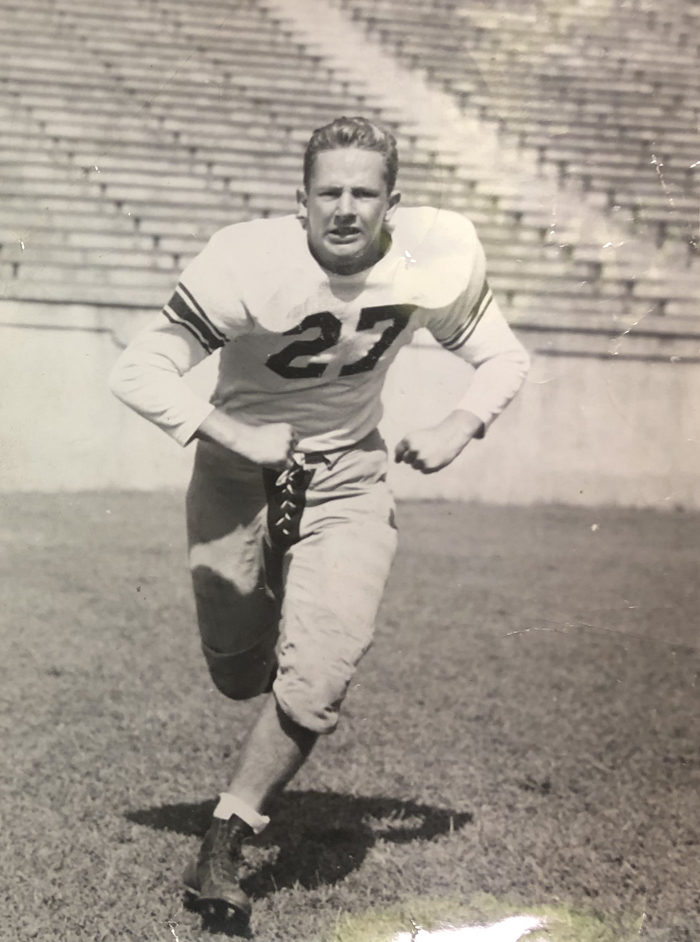 SALISBURY— The 22nd page of the football program for the epic 1948 North Carolina-Duke game declares that there is “no better Tar Heel player per pound” than Bobby Weant.

Weant, who stood 5-foot-10 and weighed 164 pounds was playing as a graduate student that season. He hailed from Salisbury where he had set the world on fire for the Boyden High Yellow Jackets as a three-sport athlete.

That 1948 UNC squad included fullback/captain Hosea Rodgers and future NFL players such as tailback Charlie Justice, end Art Weiner and tackle Len Szafaryn, so the best-per-pound description of Weant by the UNC  folks is impressive.

UNC head coach Carl “Grey Fox” Snavely was a believer in the single-wing offense. He’d started his college head-coaching career in 1930 at Bucknell at a time when everyone employed the single wing. That’s what he knew and that’s what he taught. He continued to coach single-wing football even after the T-formation, which did wonders as far as opening up the passing game, grew in popularity and gradually shoved the single wing into the history books.

In other ways, Snavely was an innovator. He is credited as being the first coach to study film of an opponent in order to formulate game plans and the first to try to draw opponents off sides in short-yardage situations.

Snavely was also a coach who believed in the value of the quick kick. Justice, who could run and throw with the best, also might surprise an opponent by punting the ball 65 yards on second or third down.

Some athletes played both ways for Snavely, including Weant. Weant was technically the “quarterback” on offense, although not the sort of  snap-taking, throwing and running quarterback of the modern era. Weant might bark the signals, but in the single wing, he was strictly the blocking back. If he touched the ball, something unusual had happened, a lateral or a fumble.

He was valuable on offense because of his willingness to sacrifice his relatively small body as a lead blocker, but he was far better on defense, where his tenacity and competitiveness made him one of the best linebackers around.

There were contests, such as the Wake Forest game of 1948 in which Weant was asked to play all 60 minutes.

His final game in a football uniform would be the Sugar Bowl played on New Year’s Day against Oklahoma, one of the most disappointing losses in UNC football history.

Besides growing up to be Boyden’s football star, he was co-captain of the basketball team and led the baseball team to a conference championship. He received the “Most Athletic” senior superlative. He also was a leader off the field — class president several years and student body president in 1943.

When he arrived at UNC, he quickly became a young leader of a depleted football squad that had been virtually wiped out by enlistments in World War II. The Tar Heels won just one football game in 1944.

His football career and education would be interrupted by the war effort. He entered the midshipman school at Notre Dame and received his commission as a Navy ensign in 1945. He was initially assigned to Fort Schuyler in New York, but then he headed to the Pacific where he served aboard a destroyer.

In July 1946, Weant was discharged from active duty in the service, although he remained in the reserves. That fall, he returned to UNC. Snavely had returned to take over the football program in 1945. By 1946, with many seasoned veterans returning from service, the Tar Heels were loaded. They went 8-2-1 and were ranked ninth in the final Associated Press poll.

The 1947 season was basically a repeat — 8-2 and another national top-10 finish for the Tar Heels. But that season included a humiliating 34-0 loss at Texas that left sportswriters and fans skeptical about how good UNC really was on a national scale.

Weant’s career plan was to become a high school football coach and teacher. He graduated from UNC, but he still had a year of football eligibility and Snavely was delighted to have him back on the team in the fall of 1948 while he worked on a masters degree in education.

That was Weant’s finest season. It was a season that began with a rematch with Texas, only this time the Longhorns traveled to Chapel Hill.

Confident Texas fans in 10-gallon hats, smoking big cigars, started arriving two days prior to the game. It was a sellout. Tickets were scalped for $200, huge money at that time. There was electricity in the air.

But it was no contest. Weant had a big hit on defense that caused a fumble that led to a Tar Heel touchdown. The final was a 34-7 UNC romp.

At Georgia, the following week, the Tar Heels were ripe for a letdown, but they defeated a great Georgia team on the road. Weant and teammate Bill Flamisch made a simultaneous hit on Georgia star Joe Geri that caused a key fumble.  That was the only game the Bulldogs would lose all season.

In the Wake Forest game, UNC’s third contest, it was written in the Post that Weant broke the spirit of the Deacons. UNC called the same offensive play four straight times — Weant as lead blocker for fullback Rodgers, who gained 10 or more yards on all four carries.

UNC did experience one letdown. Following big wins against Tennessee and LSU, the third-rankled Tar Heels tied William & Mary at home and dropped to sixth in the AP poll.

They needed to win their next three to be invited to a bowl, and they rolled over Maryland at Griffith Stadium, won 20-0 against Duke, and smashed Virginia on the road in front of a number of bowl scouts to finish an unbeaten regular season, the first for the program since 1898.

That 1948 Duke game on Nov. 20 was the first between the old rivals that featured a victory bell being carried away by the winning side. Snavely often said Justice’s 43-yard to break a scoreless tie with the Blue Devils in the third quarter was the best run he ever saw.

UNC accepted an invitation to take on Oklahoma in the 15th annual Sugar Bowl held in New Orleans at Tulane Stadium on Jan. 1, 1949. UNC had moved back up to third in the poll by then, while coach Bud Wilkinson’s Oklahoma Sooners were ranked fifth.

Weant played mostly on defense in the Sugar Bowl and played brilliantly against one of the nation’s top running games, but it was not a good day for the Tar Heels. Weiner, who never dropped a pass, dropped one in the end zone after the DB covering him (future Texas coach Darrell Royal) fell down.

Justice, who asked reporters to blame him alone for the loss, threw an ill-time interception. The Tar Heels lost 14-6 in a game that many writers believed they should have won. To this day, it is considered a big one that got away.

Fans in North Carolina didn’t get to witness the Sugar Bowl disaster via television, as the AT&T long lines hadn’t been completed into the state and wouldn’t be until Sept. 30, 1950. Instead, fans listened to the ill-fated game on the ABC Radio Network.

There was a post-Sugar Bowl party scheduled, but when Tar Heels came outside their locker room the parking lot was deserted. Buses cheduled to take the Tar Heels back to the hotel had mistakenly taken the Sooners instead.  Then when the Oklahoma buses arrived and the drivers learned their Sooners had already left, they also departed.

The Tar Heels eventually made the trip to the hotel by truck, attended the party and graciously congratulated the victors. Snavely was a stickler for sportsmanship.

After the Sugar Bowl, Weant played semi-pro baseball with Justice, finished his masters degree and accepted the job of coaching the Little Wonders of J.W. Cannon High in Kannapolis. Weant, who wasn’t much older than the players, and another young man, 1948 Catawba grad Tuck Gudger, were the Wonders’ coaches for the 1950 football season.

Weant probably would have been content coaching high school football for the next 30 years, but there were unexpected detours, including being called back to military service when the Korean War broke out.

Weant eventually went to work for the Faul & Crymes sporting goods company in Charlotte instead of returning to the high school ranks. He was a successful salesman. Customers quickly recognized the name “Bobby Weant” and connected him to UNC’s golden football era.

In 1957, Weant married Nancy Lee Maples, a native of Rocky Mount, an accomplished golfer and a dance instructor at Queens.

They raised three children and were married until Weant passed away on Nov. 5, 2014.

Growing up in Salisbury, listening to the Tar Heels on the radio along with his father and following them on the sports pages of the Post was Weant’s nephew, Bobby Crouch.

Weant even got Crouch an autograph from Justice.

Crouch would grow up to be a standout back himself, the star of Boyden’s 1957 state-championship victory.