At the Salisbury Emporium, there’s always something new on the shelf 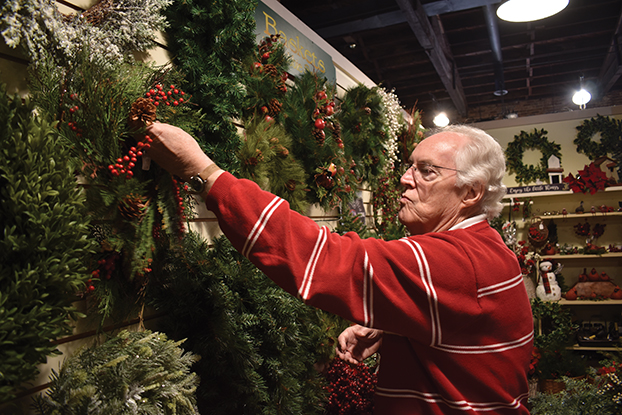 Mickey Black hangs a wreath in one of 85 different shops housed within the 15,000 square feet of the Salisbury Emporium. Ben Stansell/Salisbury Post

SALISBURY — Mickey and Betty Black have owned the Salisbury Emporium for almost 20 years, but almost every time they walk through the store, they discover something new and exciting.

“The first thing when we get here in the morning, my wife will come around to see what’s new,” Mickey said.

Mickey and Betty’s feeling of finding a hidden gem is the same feeling they hope to inspire in the customers who peruse the 85 different shops housed in the sprawling 15,000-square-foot building.

Each of the 85 shops has its own booth, which vary in size and range from a large cabinet to an entire stall. The items in each shop are created or curated by a local vendor or antique collector. The booths cover two floors and nearly every foot of the 115-year-old building. Each booth offers something, whether it’s Cheerwine artwork to vintage bobbleheads.

Mickey said that he likes to rotate a few new shops in every year and he recently added four vendors in the lead up to the Christmas shopping season.

One of those new merchants is Lewis Brendle, whose wooden creations are currently perched on the shelves of an illuminated cabinet at LMB’s Woodturning booth in the emporium. Using woodturning tools, Brendle transforms parts of fruit and hardwood trees into unique bowls, cutting boards and trinkets.

Woodworking is a skill that was passed down to Brendle, who is based in Rockwell.

“My dad, Iverson, has always carved wood by hand, so I’ve always been around woodworking,” Brendle said. “I picked it up here and there.”

Brendle’s love of crafting objects out of wood went from a hobby to a small business about 10 years ago. Since then, he’s retired and now spends four to five hours per day in his workshop. For the Christmas season, Brendle made wooden ornaments that he sold in his shop at the Salisbury Emporium, which he opened about three months ago. 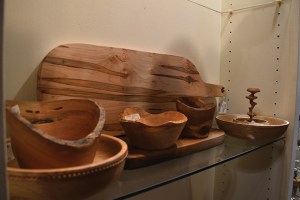 Lewis Brendle recently opened up a space in the Salisbury Emporium where he sells bowls, cutting boards and trinkets made out of wood from local trees. Ben Stansell/Salisbury Post

Brendle’s spot in the antique store is just a few feet away from another newly added vendor. Car Garner’s shop, called Gardenia’s, is offering pillows, prints, lamps, brass and ceramics. Garner is actually returning to the emporium after a previously successful stint. 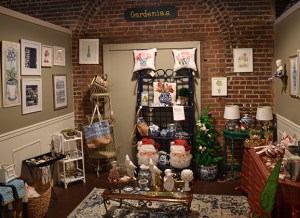 In the bottom level of the Salisbury Emporium are the other two new vendors. One of the shops, called Sister’s Touch, features whimsical bird houses made by sisters Bonnie James and Betty Hammond. Intermixed with bird houses painted to look like cows and pigs, there are pieces of Cape Cod ruby glass. 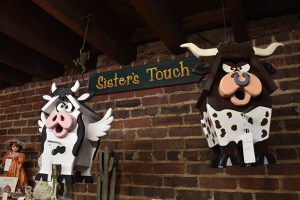 Sisters Bonnie James and Betty Hammond craft whimsical bird feeders that they sell at the Sister’s Touch stall in the bottom floor of the emporium. Ben Stansell/Salisbury Post

The last of the new booth’s is Ivette Echanique’s shop, called A Lair With Flair. Echanique, based in Mooresville, found herself stumbling down a Youtube rabbit hole watching videos of people restoring antique furniture and furnishings. A year ago, she gave it a try for herself and has since produced dozens of items made from materials she found in thrift shops.

At first, the items were decorations for her own home, but then she started selling them for a small profit.

When she was attending a craft show in November, a fellow vendor mentioned that she should look into getting a booth at the Salisbury Emporium. Echanique followed that advice and she and her husband visited the store the next day.

“We ended up seeing that there were a few available, so that’s when I decided to go ahead and talk to Betty,” Echanique said. “Things lined up there and I started a week later. I’m really happy and I’m creating stuff. It was meant to be I guess.”

Although Echanique’s booth has only been open in the emporium for a few weeks, she said it is going well so far. If she continues to have success with her booth, Echanique said she might expand to other antique malls in the area. 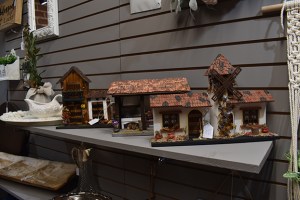 Miniature houses are among the items in Ivette Echanique’s stall, which is called A Lair With Flair. The Mooresville-based creator takes items from thrift stores and turns them into chic home decorations. Ben Stansell/Salisbury Post

Both locals and visitors have stopped at each of the four booths while doing their Christmas shopping at the Salisbury Emporium this month.

The holiday season has long been the store’s busiest season. And despite COVID-19, that has remained true this year. Mickey said that “Christmas transcends,” even when it comes to a pandemic.

“The foot traffic during the week has probably been a little less, but the people that came in are not necessarily just wandering through. They have something on their minds, they see and they buy it,” Mickey said. “The weekends we’ve been packed, steady.”

Mickey said that he has noticed an uptick in the popularity of several items, including furniture and home decor.

“We’ve seen an increase in more decorative kinds of things,” Mickey said. “We’ve sold a number of pieces of furniture. I think people have sat around so long, they’ve looked at their house and decided they wanted to do something.”

Vendors can visit the emporium at their leisure to add new items or rearrange their displays throughout the year, but Mickey said they typically try to overstock their spaces during Christmas.

Business at the emporium will likely slow down now that the Christmas season is over, but Mickey said that the store will continue to be a hotspot for serious antique collectors, or a good place for someone to find something old or new.

The Salisbury Emporium is located at 230 E. Kerr St., across from the Salisbury train station.