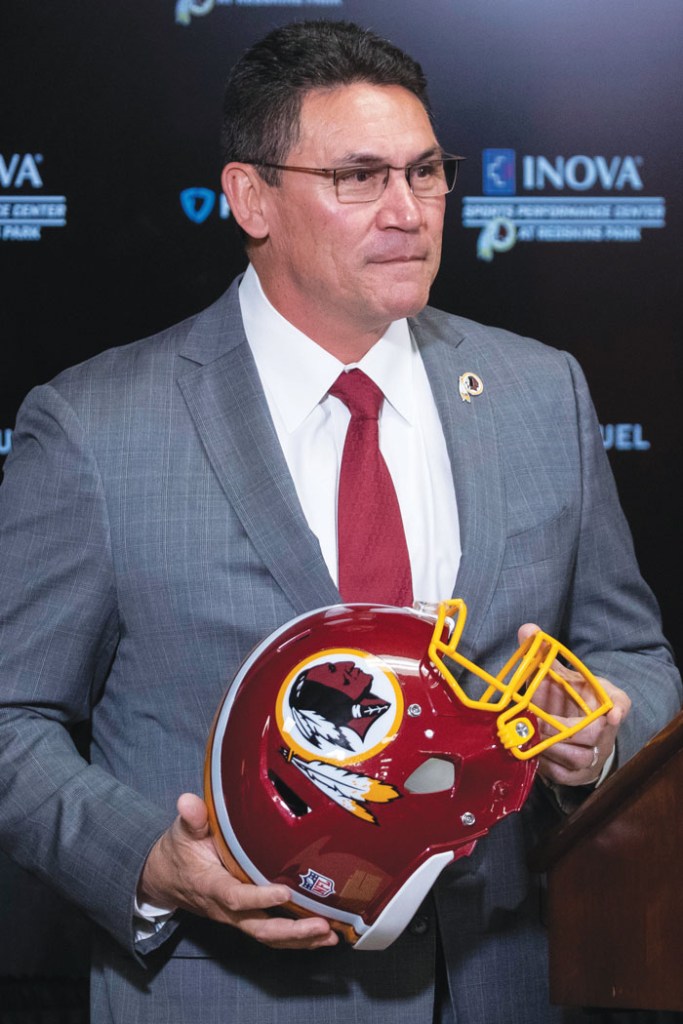 Ron Rivera has seen plenty of change since being fired from the Panthers and taking over as the Washington football team coach. (AP File Photo/Alex Brandon)

LANDOVER, Md. — Ron Rivera thought his first game with Washington would be against the Carolina Panthers he coached the previous nine seasons — a fitting season opener with a juicy storyline.

Instead, he has had to wait until Week 16, more than a year after being fired from his first head NFL job and 361 days after being put in charge of Washington’s football operations.

A lot has happened in that time, from the raging pandemic to Rivera’s skin cancer diagnosis and treatment, and now he’s less focused on facing his old team than the opportunity to clinch the NFC East that would come with a victory and help Sunday.

“I don’t want this to be people thinking this is a revenge game,” Rivera said. “We have a chance to get into the playoffs, and that’s why we want to go out and give ourselves the best chance of winning.”

When these teams last met last season, Washington beat Carolina, and Rivera was fired two days later. Now he has the chance with some former players around to celebrate the improbable accomplishment of making the playoffs with a victory and a New York Giants loss to Baltimore.

The NFL shifted Carolina-Washington to a 4 p.m. start, so players will know when they take the field whether they’re in with a win. They also know they probably wouldn’t be in this spot without Rivera, who set the goal of winning the division even when his team was 1-3.

“He’s done a heck of a lot for us, especially everything that he’s been through,” starting right guard Brandon Scherff said. “To put us in a position like this, he’s done a fantastic job.”

So far 14 games into putting his stamp on Washington (6-8), Rivera is still making an impact on Carolina (4-10), which has lost seven of eight in its first season under coach Matt Rhule to fall out of playoff contention. Panthers cornerback Donte Jackson said Rivera’s mantra of “control your inner APE” — which stands for attitude, preparation and effort — is something he hasn’t forgotten.

“That is something that I guide my weekly routine, my weekly plan by that,” Jackson said. “That is going to be with me throughout my career. It’s just some of the small things that he has instilled in us without us even knowing.”

If Alex Smith makes enough progress that his strained right calf feels good enough to play, the 36-year-old will start at quarterback for Washington. If not, it’ll be 2019 first-round pick-turned third-stringer-turned starter again Dwayne Haskins, despite being disciplined for breaking COVID-19 protocol by partying without a mask last weekend.

Smith, who’s 4-1 as the starter two years removed from breaking his right leg in gruesome fashion, wants to help get Washington back in the playoffs.

Burns could be a huge loss for Carolina. He is, by far, the team’s top pass rusher with eight sacks and Rhule said not having him in the lineup “really changes our defense.”

Chinn, a second-round draft pick, leads all rookies with 101 tackles, two forced fumbles, a sack and two defensive touchdowns. Young, the No. 2 pick, has 38 tackles, 5½ sacks and three forced fumbles and at 21 is the youngest player in Washington franchise history to be picked for the Pro Bowl.

“I think it starts with a healthy approach,” defensive coordinator Jack Del Rio said recently. “When Chase Young arrived here, he was humble. He was a hard worker. He was about business. He was about learning from guys.”

The Panthers have lost eight games in which quarterback Teddy Bridgewater had the ball in his hands on a late fourth-quarter drive with a chance to take the lead or tie. He said it would be a “huge lift” if the Panthers can break through.

“When you have the opportunity to have that last shot, you want to be able to deliver,” Bridgewater said. “And we haven’t been able to deliver. We want to get over that hump.”

Bridgewater is 3-10 as the team’s starting quarterback this season, and owner David Tepper seemed to put him on notice with his comments this week. Bridgewater still has two years left on his contract, but the Panthers could have a top-five pick in next year’s draft.

“Unless you have that guy, for sure, that gets you to playoffs and Super Bowls, you have to keep re-evaluating that,” Tepper said of the team’s quarterback play. “Because that’s the only thing that matters is Super Bowls.”