Teacher of the Year Sally Schultz believes in her students 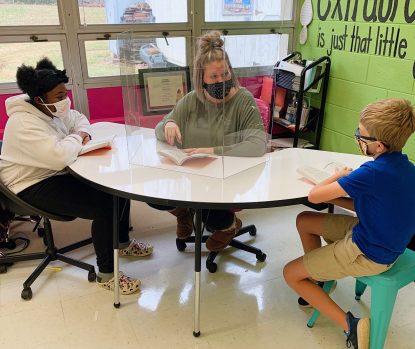 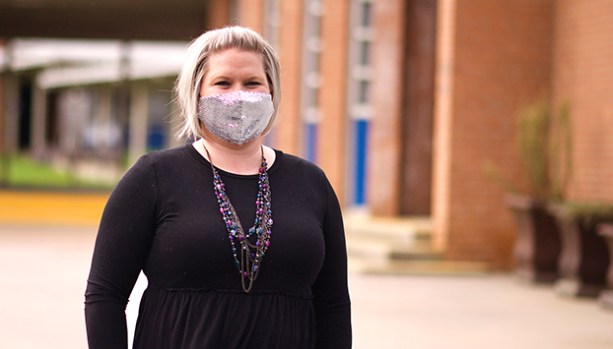 Carl Blankenship/Salisbury Post – Rowan-Salisbury Schools Teacher of the Year Sally Schultz standing in front of Knox Middle School after her win was announced on Wednesday afternoon. Schultz is passionate about working in Title I schools. 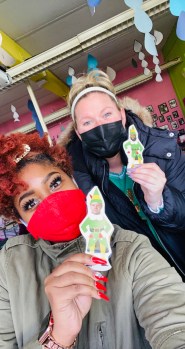 SALISBURY — Sally Schultz did not have the best experience in school. A few teachers reached her, but she was a quiet kid. While she was well-behaved and got decent grades, Schultz says today that she often felt overlooked at school.

“I was the type of learner that, if it was not hands on, I did not learn well,” Schultz said. “School did not come easy to me.”

In middle and high school, Schultz says she felt she was not learning well while sitting and taking notes in most of her classes. Schultz said it was a difficult transition for her into college because her teachers did not realize she was not grasping the material.

But she enjoyed school because of her friends and sports. So the social aspect worked. But academics didn’t, and she did not feel comfortable asking for help. However, as long as she can remember, Schultz said, she wanted to be a teacher.

“It’s hard when you don’t necessarily feel seen in the classroom,” Schultz said. “That’s just one thing that really motivates me as a teacher because I want to make sure my students, no matter what level they’re at, what learning style they are, that each of my kids, regardless of ability, that they are seen.”

Schultz’s third and fourth grade teacher made school exciting for her and made her feel like she wanted to be there. That experience, in particular, made her want to be a teacher.

Now, Schultz is Rowan-Salisbury Schools’ teacher of the year. She is passionate about teaching in underprivileged schools and has been hailed by Superintendent Lynn Moody as a teacher who exemplifies the district’s renewal model.

Schultz teachers sixth and seventh grade math, English and science. Her favorite thing about the job is spending time with her students. She wants to reach students like her who felt left out like she did and show them their potential.

Schultz is passionate about teaching at title I schools, which serve large numbers of students from low-income families. She says her students are just as capable as students who attend other schools, and they are some of the best.

Schultz is from Hilton, a village in upstate New York, but she attended Catawba College because she was determined to get somewhere away from the snow.

She was looking at Division II colleges where she could play field hockey, and Catawba was as far south as she could find.

“That’s honestly how I made my decision,” Schultz said. “That’s crazy, but that’s how I made it, and I ended up loving it.”

Schultz said class sizes at Catawba were small enough she could not help but be seen. The number of students she saw in a classroom topped out at about 20.

She felt Catawba and Rowan County were special, that she could make a difference here.

After graduating, she moved back home and took a job teaching at a private school in Brighton, also in upstate New York, for a year and a half. She loved her students there, but they were different. They were better off and the children of professionals who did not have the same challenges many students in Title I schools do.

“I just felt like I had more to give,” Schultz said.

One night, she looked at openings with RSS and applied to teach kindergarten at Hanford-Dole Elementary. A week later, she was driving down to North Carolina for an interview.

She was hired, and came to appreciate the level of support from district administration. Julie Morrow, who retired from RSS as assistant superintendent for curriculum this year, made a particular impression on Schultz.

Schultz said Morrow would visit her classrooms each year, know their names and follow students through middle and high school.

“I feel like it’s such a positive community that you don’t necessarily have in other districts,” Schultz said.

Schultz said she feels Title I schools and their students are often overlooked.

“I want to make the community, I want people from the outside to really get a true sense of who our children are and see them as more than just a child of poverty, a behavior statistic. I want them to see the true potential and just see how truly amazing our kids are,” Schultz said.

Schultz said sometimes the students do not see their own potential, and she sees them start to believe in themselves. Schultz taught one student in seventh grade who struggled, but Schultz and her team members saw potential. Two weeks ago that student asked for a recommendation for Rowan County Early College.

“To see that she now has the confidence in herself and believes that she can do that, that’s huge,” Schultz said.

Schultz said some of her students have been through more than many adults, and they are resilient sometimes because of the challenges they face, setting them up to push through situations others would give up on.

“At times they don’t realize that when they’re younger,” Schultz said.

When Principal Michael Courtwright moved from Hanford-Dole to Knox, Schultz followed. She connects with his leadership style, and he pushed her to move from kindergarten to fifth grade. She was surprised by how well she took to teaching older kids.

Courtwright has called Schultz a pioneer at the school who meets her students’ needs more than academics and has a gift for helping them develop their aspirations.

In a normal year, Schultz said, she is not a big fan of homework because she knows many students have different situations at home and have to step up to do things like take care of siblings.

Schultz wants to help students find how they learn best. Normally, her collaborative classrooms are full of couches and bean bags.

“Most parents are excited about it and they see how excited their kids are walking in, but I have had some that are very apprehensive about it,” Schultz said. “The one thing I try to explain to them is I make sure that all of the chairs are not exactly the same and all of the seating is the same. I have all different kinds so students can learn to find the seating that is best for them.”

There are tables and chairs as well for students who want that option. Schultz said she tells parents the team wants to find how students learn best and also find the environment that is best for them.

Schultz said the need to be comfortable is not something she denies herself and does not expect to deny her students either. She’s also learning about the value of learning comfortably now — earning her master’s degree mostly on a couch with some background noise while she’s working.

“For eight hours a day at school, I’d rather them be comfortable than necessarily sitting at a desk,” Schultz said.

With her teammate, Christina Mason, in a normal year, there is a flexible classroom environment and schedule. The goal is to teach students how to be responsible and learn what is best for them. Parents who are apprehensive start to see how the environment is beneficial.

Schultz and Mason are piloting a team that teaches multiple grades and all core subjects. In a typical year, students are shared. Some lessons may be co-taught or they may split units for different grade levels.

Sometimes kids may need a more quiet classroom or a more collaborative one, and the teachers do different things to meet student needs.

“This year is a whole different ball game because I’m only seeing them two days a week,” Schultz said. “It’s definitely a challenge because you want them to continue doing the learning at home this year.”

Schultz said schools have to balance giving students grace because they do not know what their situations are at home. She does not want to punish students because of what happens at their homes, and she does not want them to suffer academically either.

After school programs on weekends also are not happening this year, but Schultz said teachers are working hard to bridge gaps while not putting extra stress on kids.

Despite the difficult parts of this year, Schultz said the students want to come to school, even asking if they can come more than two days a week.

“Honestly, our kids have been great,” Schultz said. “They are excited. They want to be in school.”

Schultz is looking forward to when the pandemic wanes and schools can bring students back full time.

“I think plan B is the smart choice right now,” Schultz said. “I would much rather see my kids in person than virtually.”