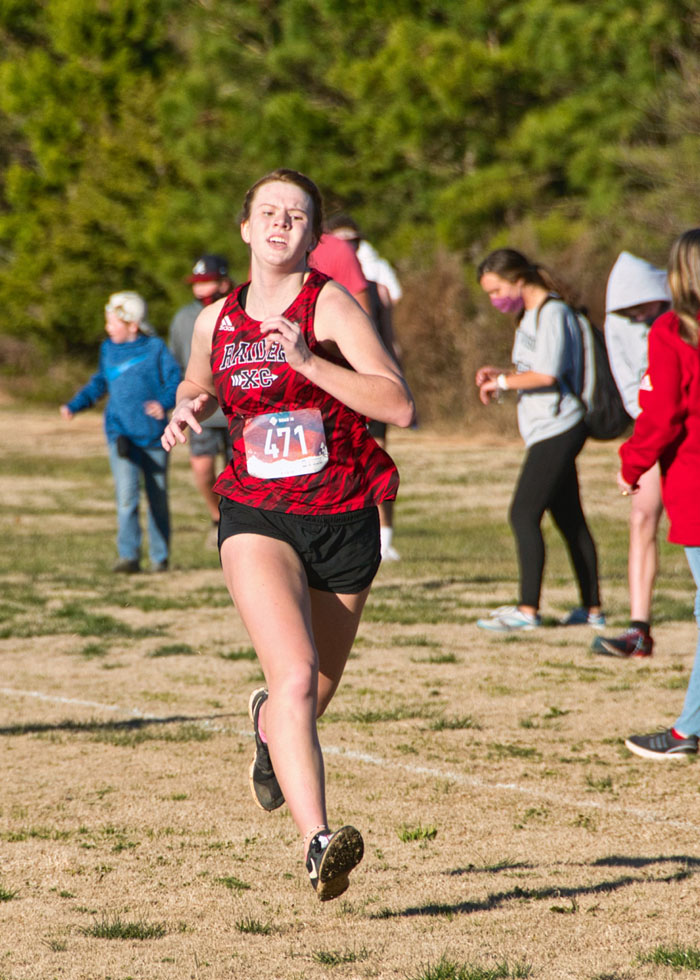 SALISBURY — While the championship by the South Rowan boys in Tuesday’s Central Carolina Conference Championship Meet fell into the business-as-usual category, the victory by the South girls floored everyone — even the Raiders.

While the boys smiled, the girls bounced up and down when scores were announced. They were able to forget for a few precious moments the masks they had to wear and the safe distance they had to maintain from their teammates.

The Raiders hadn’t been able to keep Carson in sight at the Rowan County Championship Meet on Dec. 9. South had managed second in the county team scores, but it was a silent second, a distant 45 points behind the Cougars. Rowan County runner-up was regarded as a minor accomplishment. West isn’t as strong as it once was. East’s best runner was hurt. Salisbury’s best runner wasn’t permitted to run. North wasn’t represented.

South was seeded fourth for the 10-team CCC meet, which placed the Raiders in the fast wave of five teams that took off at 3 p.m. They got started in decent temperatures for Dec. 22.

It was a mild surprise when South junior Bethany Rymer was the first runner to appear. Rymer placed fifth behind four Cougars in the county meet. She took fourth in the 2019 CCC meet.

The CCC favorite probably was North Davidson junior Vivian Posados, last year’s conference runner-up. But there was Rymer, churning along and winning by three seconds in 21:38.

Hilly and up and down, Salisbury Community Park is regarded as one of the more challenging courses in the area, but Rymer turned in a time 45 seconds faster than she had clocked in the county meet at Dan Nicholas Park.

Rymer caught her breath and along with CCC coach of the year Rebekah Julian started watching anxiously for more Raiders to come into view.

More red and black was on the way.

South freshman Madison Beaver, a tiny blonde bundle of energy, was the next runner to appear. She ran 22:50, after a 23:08 county meet. She would take sixth overall.

Madison’s twin sister, Lindsey Beaver, hadn’t run in the county meet, but she placed 15th in the conference, taking the last all-conference spot.

“We were seeded fourth and our goal was to finish fourth to qualify for the regional,” Rymer said. “But everybody ran so well today. I was watching my teammates come in and I was thinking, ‘We’re going to do a lot better than fourth.’ ”

Right on Lindsey Beaver’s heels was senior Anahi Reta, who is making a comeback from tendinitis. Reta clocked 24:26, almost two minutes faster than she had managed in the county event.

“It was a very emotional race for me,” Reta said. “I let everything out.”

Julian said Reta’s effort probably was the key to the victory,  but South still needed one more score.

That turned out to be freshman Macy Miller, who would finish 23rd. Miller crossed the line 32 seconds after Reta.

Rymer was a second team all-county basketball player as a sophomore last season, but she’s decided to focus on running.

“I love running and I love this team,” she said. “Everyone is so positive. I’m going to go right from cross country into working on track and field.”

South’s victory looked certain after Miller came in, but it wouldn’t be official until the second wave finished.

The story of the second wave was Salisbury’s Sutton Webb, who placed third in the CCC meet in the fall of 2019.

Webb hadn’t been allowed to run in the county meet. Officials explained that all runners for the county meet had to be seeded in order for teams could be placed in waves. Sutton hadn’t run in any previous 2020 meets. Therefore she had no seed time and wasn’t allowed to compete.

The Hornets were upset by that ruling. Salisbury had only five runners present at the county meet. It takes five for a team score. When Webb couldn’t run, the Hornetes couldn’t even post a score in one of the season’s marquee events.

Salisbury had competed in two cross country meets prior to the county event, but Webb, a junior who is already a Georgia soccer commit, hadn’t been able to be there.

“Both of those meets were on Saturday mornings and I’m involved with my club soccer team on Saturdays,” Webb said. “I wasn’t at the county meet trying to make all-county. That’s not why I run. I was running to be with my teammates.”

Webb got to compete in the CCC meet. It was mostly a solitary effort in that slower wave that took off at 3:30 p.m., after the wind had picked up. Webb was competing against herself.

“I had girls running with me the first mile and I ran a 6:40 pace, but after that it was just me running alone, and it was hard to tell if I was going too fast,” Webb said.

Webb felt like she was sinking in the mud at the start and finish and the wind stung her throat, but she finished first in the wave — by a lot. Her time was good for fourth place overall, after it was combined with times from the first wave. She easily made the all-conference team.

It was a good showing. Her mother, seated on a soccer ball, got up and kissed Webb on the head as she recovered.

North Davidson (76) edged Central Davidson (78) for second place, while Oak Grove (85) nailed down the fourth and final regional berth. Other team scores were defending champion East Davidson (110), Salisbury (166), Ledford (171) and West Davidson (174). Lexington and Thomasville had runners, but didn’t have the minimum five to post a team score.

South won the conference as recently as 2018 when Rymer was a freshman runner-up, but those were the days when Rymer had the stellar assistance of Madison Henry and Madison McGuire.

Now Rymer leads a fresh group that came out of nowhere Tuesday.

“I think that might have been as good a race as South has ever run,” Julian said. “This is such a young team, but we’ve got depth. We’ve got a lot of solid runners.”

Reta just missed all-conference, but she was OK with that. Winning a team championship as a senior meant everything.

All championships are sweet, but an unexpected one is even sweeter.

It’s been quite a week for South sports, especially the girls. South’s volleyball team completed another undefeated CCC season on Monday.

After a break, South will prepare for the 2A Midwest Regional that is scheduled for Fisher River Park in Dobson on Jan. 16. Rymer won a recent race on that course.