High school boys cross country: A changing of the guard for Julians 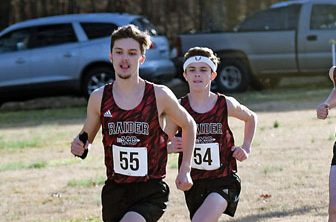 SALISBURY — The present and recent past of Rowan County cross country is senior Noah Julian, but the future is his younger brother, Eli, a freshman.

Tuesday’s Central Carolina Conference Championship Meet at Salisbury Community Park, a day of triumph for South Rowan — the school, the athletic program, the cross country team and the Julians —  was one of those changing-of-the-guard moments. This was the last meet Noah will run on one of the two courses that he considers a home meet — Salisbury Community Park and Dan Nicholas Park. 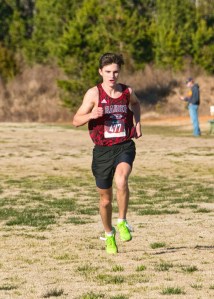 Noah won yet again on Tuesday, giving him five team championships and six major individual championships in the last two years (three conference, three county). Eli, runner-up on Tuesday just as he was in the county meet, proved again that he’s ready to follow in his brother’s footsteps, and then move beyond them. Noah kept Eli at least at arm’s length, just as he’s managed to do all season, the only season they will run together, but Eli’s future is limited only by the grass and stars.

“Eli is the best 2A freshman in the state — and that’s by a lot, by about 40 seconds,” Noah said proudly. “From the research I’ve been able to do, even with South Rowan moving up to 3A next fall, he can be the best in his class in 3A. So there’s a whole lot out there for him. So much is out there for him.”

All the Julians, and that includes Noah and Eli’s father Scott, CCC boys coach of the year, and their mother, Rebekah Frick Julian, CCC girls coach of the year, are massive Notre Dame fans. The family has made the trip to South Bend, Indiana, has made the campus tour, and it was everything they thought it would be.  That’s Eli’s dream school at this point. He’d love to run for The Irish someday.

For Noah, who hasn’t made a college commitment yet, the next step probably will be Division II Lenoir-Rhyne as a psychology major. That’s a school and program that he really likes, led by a coaching staff he really likes. He made a trip up to Hickory over Thanksgiving and fell in love with the place.

Even with a couple of Julians at the front, it takes at least five runners to win a cross country meet. South, a team with a top seven of three seniors and four freshmen, has a splendid supporting cast. Lees-McRae signee Landon Cromer placed sixth. Landon also has a talented freshman brother. Grayson Cromer was eighth.

The seventh man for South was freshman Brooks Hubbard, the third son of Northwest Cabarrus baseball coach Joe Hubbard who coached the three Seager brothers during their high school days. Brooks was a respectable 32nd in his first CCC meet. His dad, not surprisingly wearing a Baltimore Orioles face covering, was pleased.

South overcame some good Davidson County programs on Tuesday, including the Oak Grove Grizzlies, who boasted the 3-4-5 finishers in Will Todd, Trey Benson and Lex Reid, all of whom broke 18 minutes. Oak Grove, East Davidson and Central Davidson will join South Rowan in the upcoming regional.

South also overcame the primary obstacle of all athletes in 2020 — COVID-19.

Prior to Tuesday’s meet, South’s runners had not been together in one place since their victory in the Rowan County Championship on Dec. 9.

“We had three positive COVID tests on the team and then quarantines,” Scott Julian explained. “No one got deathly sick, but there were symptoms. We were holding practices with three runners.  Our fear was that all the work we’ve been putting in since June might not be recognized. Not saying that work would not have been for nothing, but we did want to show today how hard we’ve been working.”

The weather cooperated, friendly temperature readings, especially when South runners took off with the faster of the two waves of runners at 2:30 p.m. Waves were needed because of the limits place on the number of runners on the starting line.

The wind would pick up later in the day, and it grew quite a bit colder.

The damp course also cooperated, for the most part, but everyone agreed it would have been a lot wetter on Monday.

“It was pretty mushy at the start and at the finish,” Eli said. “Those were the trouble spots. I stayed with Eli for the first mile, but then he started to pull away from me.”

A mushy course at the start can get in your head, Noah explained, but South wasn’t going to be denied a repeat CCC championship. The Raiders didn’t win the 10-team conference in 2018 when they expected to, but they took care of business in 2019 — and again in 2020.

“Today was a day we’ve been working toward for eight months,” said Noah, who clocked a Salisbury Community Park personal best in 16:54 and finished 18 seconds ahead of his brother. “We started working for this in June, but the season kept getting pushed back. Even after the county meet, we kept hearing that everything might be shut down at any time. My prayer all along was, please just let us get to conference. Well, today we got to conference and we got a championship that we really wanted. I’m very proud of Eli and all my teammates.”

Other team scores were North Davidson (123), West Davidson (176), Ledford (182) and Salisbury (188). Thomasville and Lexington participated, but didn’t have the minimum five runners required to post a team score.

Now South will take a break for a week.  Then the Raiders will start retooling for the 2A Midwest Regional, scheduled for Fisher River Park in Dobson, on Jan. 16.

“Our guys have kept working and running for eight months, through everything that’s happened,”Scott Julian said. “That’s an amazing accomplishment.”

The top runner for Salisbury was Michael Lowry. He was 21st in 19:25. Salisbury ran in the second wave of boys at 4 p.m.