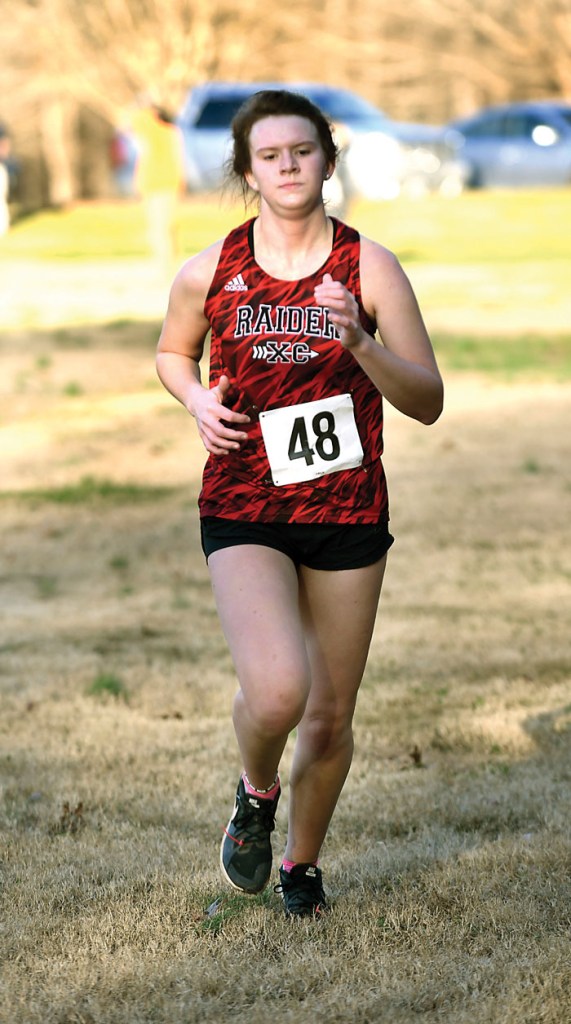 Heck, the Raiders weren’t supposed to finish second. Or even third.

“We were seeded fourth and our goal was to finish fourth to qualify for the regional,” said South junior Bethany Rymer, who was crowned as individual champion after clocking 21:38.19 on the challenging Salisbury Community Park course. “But everybody ran so well today. I was watching my teammates come in and I was thinking, ‘We’re going to do a lot better than fourth.'”

First is definitely a lot better than fourth. South took the team title with a 1-6-15-16-23 — 61. North Davidson (76) edged Central Davidson (78) for second place, while Oak Grove (85) nailed down the final regional berth. Other team scores were defending champion East Davidson (110), Salisbury (166), Ledford (171) and West Davidson (174). Lexington and Thomasville had runners, but didn’t have the minimum five to post a team score.

South won the conference as recently as 2018 when Rymer was a freshman runner-up, but those were the days when Rymer had the stellar assistance of Madison Henry and Madison McGuire.

Now Rymer leads a fresh group that came out of nowhere Tuesday after finishing a distant second to Carson in the Rowan County Championship Meet two weeks ago at Dan Nicholas Park.

Freshmen twins Madison and Lindsey Beaver accounted for the sixth and 15th places for the Raiders. Another freshman, Macy Miller, was 23rd.

A difference-maker was senior Anahi Reta, who was part of South’s 2018 championship season but was sidelined in 2019 by tendinitis. She was 16th on Tuesday.

“It was a very emotional race for me,” Reta said. “I let everything out today, and feel happy.”

Added South coach Rebekah Julian, “Anahi was the big key to winning the championship. We needed to close the gap some between the Beavers and our next runners. Anahi closed that gap.”

The female runners competed in two waves, with a “fast wave” of the five top-seeded teams, followed by the second wave of the rest.

Salisbury was relegated to the second wave, which meant the Hornets’ standout Sutton Webb, the Georgia soccer commit, was running a solitary race.

“I had girls running with me the first mile and I ran a 6:40 pace, but after that it was just me running alone, and it was hard to tell if I was going too fast,” said Webb, who managed to finish fourth when times from the two waves were combined. “It was a windy day and the wind was stinging my throat. And it was muddy in places. There were times I thought I was sinking.”

Rymer, who placed fifth and was the top non-Carson runner in the recent Rowan meet, has gone back and forth the last couple of years trying to decide if her primary sport is basketball or cross country.

She’s decided to give up basketball and focus on running — cross country and track and field.

She said she rolled an ankle during Tuesday’s race, but she kept moving.

“I love running,” she said. “And I love this team. Everyone stays positive.”

Reta just missed all-conference, but she was OK with that. Winning a team championship as a senior meant everything.

All championships are sweet, but an unexpected one is even sweeter.

“I think that might have been as good a race as South has ever run,” Julian said. “This is such a young team, but we’ve got depth. We’ve got a lot of solid runners.”