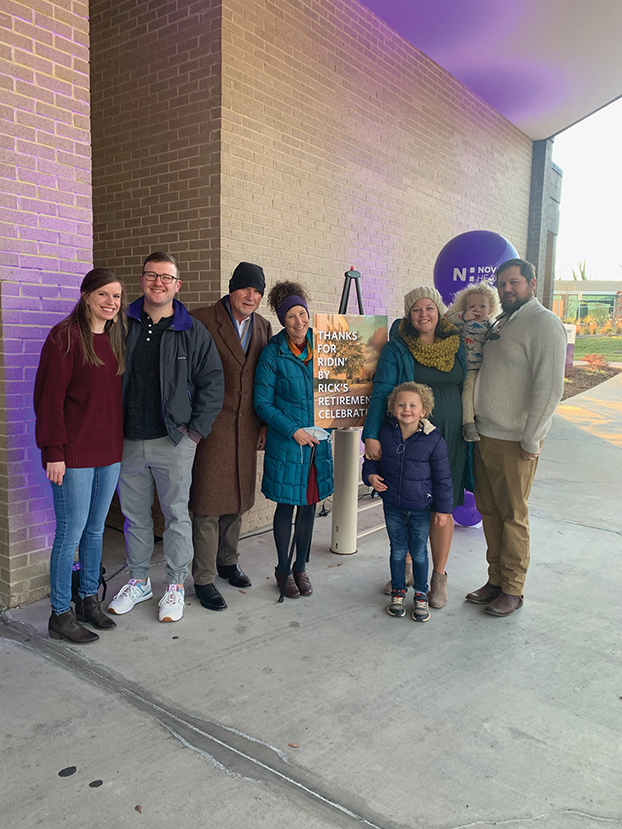 Rick Parker and his family gathered at this drive-thru retirement celebration earlier this month. Photo submitted.

SALISBURY — For two hours, a steady stream of cars pulled into the parking area near the Smith Heart and Vascular center.

The driver of each vehicle was there to spend just a moment chatting with one man — Rick Parker.

Parker, the outgoing executive director of the Novant Health Rowan Medical Center Foundation, was starting to cause a traffic jam as cherished moments turned into cherished minutes.

“A couple times, they said, ‘Well, Rick you need to stop talking and let them leave because traffic is backing up,’” Parker recalled. “It was a good problem to have.”

On Tuesday, Dec. 15, Parker said his long goodbyes to the countless people that he’s impacted over 40 years of working at the medical center, first as a patient advocacy coordinator and as the foundation’s executive director and chief fundraiser. At the end of December, Parker will close the doors on his career and transition to a life of fishing, traveling and spending time with his grandchildren.

Parker may be retired, but his legacy will last for decades to come.

In 1981, Parker approached Rowan County Hospital Administrator Richard Hurder with a proposition — he wanted to create a patient advocacy program. Hurder gave him the green light and Parker’s program succeeded, opening the door for other opportunities at the medical center.

“After a period of time, little by little, they gave me more responsibility at the medical center and I began to grow with the organization,” Parker said.

After serving in various capacities in the hospital’s administration, Parker became the Novant Health Rowan Medical Center Foundation’s executive director in 2013. The foundation is a branch of the medical center that raises money for capital projects. When a building needs to be built or new equipment needs to be purchased, the foundation is oftentimes where people look.

When Parker took over, he inherited a project to construct the Glenn A. Kiser Hospice House. Guiding that process to fruition was Parker’s first major accomplishment as executive director, but it wouldn’t be his last.

Parker was instrumental in fundraising for the Wallace Cancer Institute, a 32,000-square-foot facility where patients can receive all-in-one treatment for cancer. For the project to get off the ground, the foundation needed to raise $12 million, a sum that Novant Health would match. 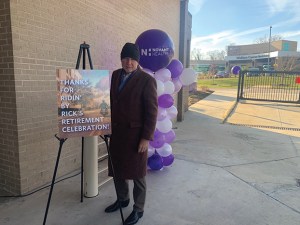 Rick Parker stands by his retirement celebration sign. In the background stands one of Parker’s greatest career accomplishments – the Wallace Cancer Institute, a project he helped fundraise for and guided to completion. Photo submitted.

In addition to overseeing the fundraising and construction for the Wallace Cancer Institute, Parker also led the charge to fill the building with bright, colorful paintings and artwork from local artists. He wanted to provide an “uplifting environment” for patients.

The Wallace Cancer Institute accepted its first patients earlier this fall. With the project complete, Parker decided that it was the right time to retire.

“In the back of my mind, I always had this process of, when I leave, I want to make sure I’m leaving it in a better position than when I arrived,” Parker said. “I can honestly say that is the case now.”

Kristen Trexler, the development manager at the Novant Health Rowan Medical Center Foundation, said that Parker’s “dedication to the patients and healthcare of this community is a legacy that can never be replaced.”

To honor Parker’s career, Novant Health has launched a new Cancer Survivor Fund. The fund will provide assistance to the patients and families receiving care at the Wallace Cancer Institute. Tracy Smith, the incoming chair of the Novant Health Rowan Medical Center Foundation, said that the fund is a fitting tribute to Parker.

“To me, this is the icing on the cake. It means so much to him,” Smith said. “That patient care is so important to him. It’s that community and continuity that he felt was so important.”

In his retirement, Parker said that he wants to visit every North Carolina state park and would like to maximize the time he spends with his beloved grandchildren. First on the agenda, Parker said, is teaching them how to snowboard this winter.

If Parker and his grandchildren need a break from the slopes, Blabon has an idea for something they can do closer to home.

“I told him, ‘When you’re driving around with your grandchildren, you can point out different things that you made possible for our medical center, one of them being the Wallace Cancer Institute,’” Blabon said.

To find out more about the Cancer Survivor Fund, visit SupportNovantHealth.org/HonorRickParker.