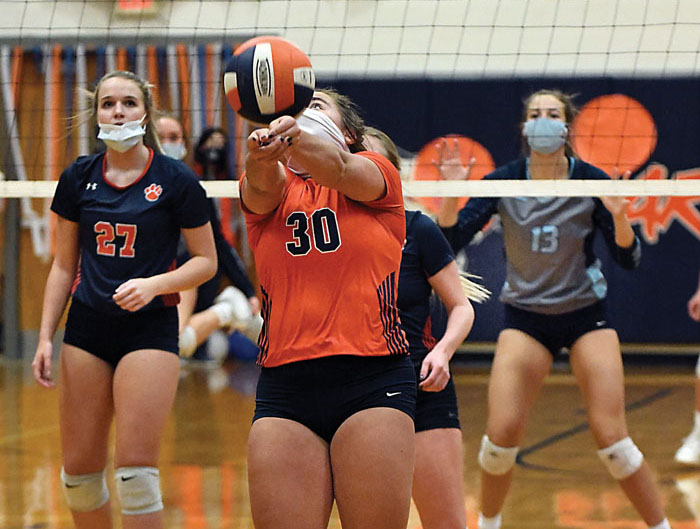 CHINA GROVE — The happiest person in the Carson gym for Senior Night wasn’t a senior; it was a senior citizen.

Jean Vaughn, 83, got to see her granddaughter Jaden Vaughn, one of the team’s standouts and a Lenoir-Rhyne signee, play on Friday.

With the guest list limited to 25 home team parents for volleyball matches in this COVID-dominated season, grandparents, sisters, brothers, uncles and aunts have been lost in the shuffle, eager to support, but on the outside looking in.

But several parents of non-seniors gave up their ticket allotments on Friday so more family members of seniors could be in the gym. Jean Vaughn wasn’t the only beneficiary. There were proud big sisters in attendance.

It was all a nice gesture. It wasn’t the last nice thing. Carson saluted familiar adversaries — West seniors KK Dowling, Allison Ennis and Emma Gaeta — with introductions and roses just like they were playing at home.

The balance of volleyball power in Rowan County has shifted dramatically in the last few years. West used to be chasing Carson. Then the Falcons caught up. Now West has moved ahead, sweeping the Cougars the last two seasons. West has more tall people, more fast people and more depth. West has role players who would be the best players on some county teams.

Based on the stat sheet, Carson’s top four players are seniors. On the bright side, if you’re a Carson fan concerned about the future, the Cougars won Friday’s jayvee matchup with West.

Hales, a libero, who plans to play volleyball and softball at the next level, reached an extraordinary milestone in Friday’s match, surpassing 2,000 career digs for her four-year varsity career.

Carson (3-6) looked outmanned in terms of inches and hops, but Senior Night magic happens sometimes, and Vaughn was ready to play the match of her life.

West’s tall junior outside hitter Kelcie Love dominated the first set, as the Falcons cruised to a 22-14 lead.

But Vaughn led a Carson charge and the Cougars got all the way back to 24-all before a missed serve and one more kill by Love did them in. Ennis dug an attack by Vaughn that led to Love’s kill. If Ennis doesn’t get to that one, it’s 25-all, and who knows how the rest of the night goes?

“It’s always tough playing Carson, but we just weren’t at our best tonight for some reason,” Ennis said. “It looked like we were going through the motions on serve-receive. We were never fully into it, never really at full-go.”

Ennis did appear to be at full-go. She went into the bleachers in pursuit of one ball. Thirty seconds later, she was banging into the scorer’s table to get another one. She has impressive mobility. On both of those plays, she turned and immediately sprinted to the other side of the court.

Vaughn recently recorded her 1,000th dig and 1,000th kill during a match at East Rowan. It was only a few miles from home and Vaughn’s parents knew she was certain to get both milestones, but it was a road game, so they didn’t get to be in the gym to experience it. That’s how sad the COVID situation has been.

Vaughn took control of the second set in all phases — serving, digging, blocking and hitting — to even things up. She crushed set point. No one was digging that one, and the Cougars celebrated.

In the critical third set, Dowling, the daughter of West coach Jan Dowling, took over. It was 14-all when Carson missed a serve, and then Dowling had kills for the Falcons’ 17th, 18th, 19th and 20th points to open up a 20-15 lead. West held on from there.

“We’ve been playing a lot better the second time through our conference and we had a lot of girls who came through tonight,” Vaughn said. “But West is tough. They’re solid all-around. They’ve got a lot of hitting options.”

The fourth set was 13-all when the Falcons showed some of those options. Noe Gaeta, who shares setting responsibilities with Ennis, had the tie-breaking kill that put West ahead to stay. Then Ashlee Ennis, Allison’s sister, served one of her three aces. Then Love (13 kills) and Dowling went to work, and it was all over.

Dowling is a terrific left-handed player, athletic enough to spring high and hammer a kill, even when she’s on the back row. She had 21 kills, 22 digs and two blocks.

“We’ve played better and better as this season’s gone along and we played hard tonight, but we had too many unforced errors when the (first and third) sets were right there for us to take,” Carson coach Kelan Rogers said. “We’ve got small hitters, so we can’t make mistakes like that. We can’t give any points away.”

Rogers said this will be his first losing volleyball season in 30 years. The COVID-shortened season meant starting with conference play immediately, and the North Piedmont Conference is about as good as ever. An improved (and young) East team beat Carson early this season. Carson had its chances against North Iredell and South Iredell, just as it did against West, but couldn’t quite get it done.

West coach Dowling was pleased to have former star Tori Hester, who’s home for Christmas break at Troy University, on her bench as an assistant coach, but she didn’t find much else to smile about. She didn’t think her team brought the passion for a Carson match that a Carson match deserves.

“Jaden Vaughn had a great match and I give her a lot credit, but I don’t know what to do with my girls,” Dowling said. “We were kind of stuck in neutral all night.”

Dowling can’t be thrilled with the playoff structure in this strange season. West is tied for second in the NPC with South Iredell, but the Falcons may not make the limited playoff field. The 16-team 3A West bracket will include 13 automatic qualifiers based on conference standings and only three wild-card teams. North Iredell has wrapped up the NPC, and the six-team league is only guaranteed one playoff berth. West lost a five-set match to North Iredell last Monday.

Carson has scheduled games after Christmas on the road against West Davidson and South Rowan.

West is planning to hold a Dec. 30 Senior Night match in Mount Ulla.