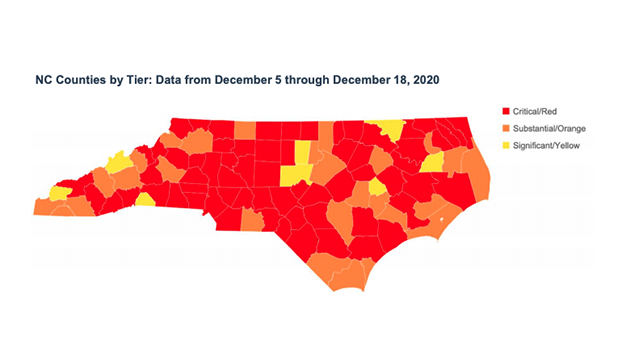 This map, updated Tuesday, shows the state's county alert system, which classifies counties according to the severity of community spread.

For the second day in a row on Tuesday, Rowan County reported fewer than 100 new COVID-19 cases.

There were 89 new COVID-19 cases reported Tuesday, bringing the total during the entire pandemic to 7,917. On Monday, there were 59 cases reported. With 5,470 recoveries and 157 deaths, there are 2,290 active cases. Deaths remained unchanged in Tuesday’s update while there were just six new people declared recovered.

There were 22 Rowan Countians being hospitalized Tuesday — a number that remains below peaks from earlier in 2020.

Rowan, however, remained among the counties in the “critical” or “red” category for community spread — a state metric updated every two weeks. Tuesday’s update to the alert system brought the number of “red” counties to 65, a majority of the state. There were 48 counties in the same category two weeks ago.

Rowan and all of its immediate neighbors meet the criteria for critical spread because of more seeing more than 200 cases per 100,000 people in the previous 14 days, with at least 42 cases during that time and having more than 10% of cases being positive in those two weeks or a high impact on county hospitals.

All but eight counties are red or orange, said N.C. Department of Health and Human Services Secretary Mandy Cohen.

“If you are in a red or orange county, you should limit going out to essential activities and avoid contact with people you don’t live with,” Cohen said.

Other recommendations for red and orange counties include avoiding settings where people congregate, ordering out from restaurants or eating outdoors and socially distanced and stay home if at high risk for illness.

Cohen said she’s worried about worsening COVID-19 trends and full of hope because vaccines for the coronavirus are being administered.

The state says that 24,500 people in North Carolina have received the first dose of a vaccine, which includes 67 people who live in Rowan County. On Tuesday morning, neither the Salisbury VA Medical Center nor Novant Health Rowan Medical Center had begun providing vaccinations.