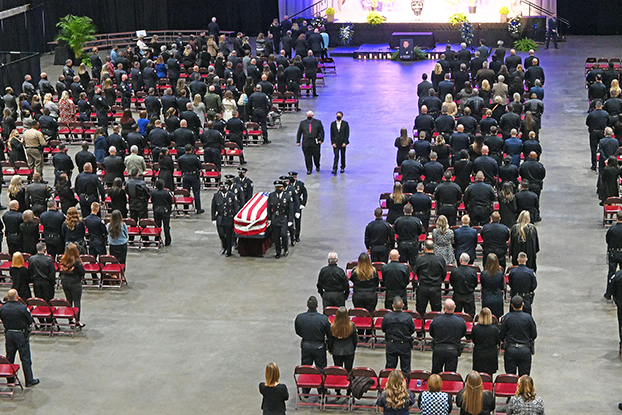 Natalie Anderson/Salisbury Post — Hundreds of law enforcement officers as well members of the Concord and Rowan County communities gathered Tuesday at the Cabarrus Arena and Events Center to remember and reflect on the life of Concord Police Officer and Rowan native Jason Shuping, who died in the line of duty Wednesday, Dec. 16, 2020.

CONCORD — A true hero. Top shot of his class. Jack of all trades. Servant. Perfect teammate.

Those are a few ways people describe Concord Police Officer Jason Shuping, who died in the line of duty on Dec. 16 during a shootout off of Bruton Smith Boulevard, near I-85 and Concord Mills. He was approaching a suspect in a carjacking incident at a Sonic restaurant with another Concord Police officer, Kaleb Robinson. The suspect fired shots from a handgun that killed Jason and injured Robinson.

In a nearly full Cabarrus Arena and Events Center, hundreds of law enforcement officers, family, friends and members of the Cabarrus and Rowan County communities solemnly gathered Tuesday to remember Jason, who Rev. Richard Myers, his pastor, called “a hero full of honor and humility.”

Jason, 25, was born in Rowan County to Richard Dane and Lynn Karriker Shuping on Nov. 15, 1995. He graduated from East Rowan High School in 2014, where he played football and track and was a member of the Honors Chorus.

He then began his career as an officer with the Concord Police Department in 2019, serving with David District Team 3.

Concord Police Chief Gary Gacek at the memorial service said he first met Jason in March 2019 and thought he was mature and maintained a strong moral code.

“He clearly wanted to be a police officer for the right reasons,” Gacek said. “Jason didn’t want to be a cop to resolve some sort of curiosity for a few years and then move on to do something else. Jason was ready and willing to commit his life to a career of service to a community he barely knew. He wanted to make Concord a better and safer city for everyone.”

Gacek said it didn’t take long for the department to determine Jason was someone they needed to be on the team.

Gacek also recalled memories and stories he had with Jason. Following Jason’s oath of office, Gacek said Jason was under the impression it was customary to blow his whistle following the oath, but a few people were in on the prank. There was no such tradition, and the confused but determined face of Jason’s was “priceless,” Gacek said.

Gacek said officers receive commendation chips, or coins, for going above and beyond what they’re expected to do. Such instances can include changing a tire for a stranger on the side of the road, paying for a motel room for a battered woman and her children or donating a pint of blood during a global pandemic when the supply is low.

But Gacek described an event that Concord officers say earned Jason a seventh coin. In September, Jason investigated a burglary at Concord Mills. A citation was issued and the suspect was released from custody. Later that night, several stores there were robbed. Jason investigated again and believed the same suspect he cited was responsible for the nighttime robberies.

Jason was given a coin, but he didn’t accept it. In a handwritten note wrapped around the coin, Gacek said the note read, “Thank you, but I didn’t earn this. Hold onto it until I have.”

Myers, who pastors at Shiloh Reformed Church of Faith, said he pastored the Shuping family for more than nine years.

Myers said it’s even more important to support each other during this time. Quoting a line from the movie “Shadowlands,” he said, “We can’t have the happiness of yesterday without the pain of today.”

Myers called Jason “the jack of all trades,” praising him for his knowledge about roofing, flooring and landscaping.

“We are proud that God made him a part of our family,” Myers said. “And our hearts ache with his family today. Because we will miss him and his warm smile dearly.”

Jason also enjoyed hunting and fishing, vacationing in Wilmington and cheering on the Carolina Panthers.

Mayor William Dusch praised Jason’s dedication to the community, whom he called Jason’s “second home,” stating that the community would be forever indebted to his service.

“Jason, at his heart, was a servant,” Dusch said. “He chose to serve our city, our community, each of us, every day. He wanted to make a difference, a difference in this world. And that’s why he chose the path he did.” 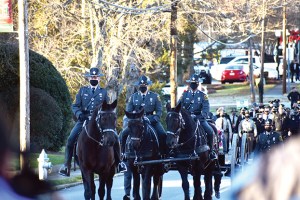 In a tweet on Tuesday, Gov. Roy Cooper said seeing law enforcement officers shot and killed in the line of duty is “senseless and appalling.”

“Violence can never be tolerated, including against law enforcement,” the tweet continued. “Our hearts are with you and those families.”

“To my law enforcement brothers and sisters, take comfort in knowing that we have one more guardian angel watching over us,” Gacek said. “As of today, Jason’s unit No. 4434 is officially retired and will always serve as a reminder of his commitment an ultimate sacrifice for our community.”

Following the funeral service in Concord, people gathered in the town of Faith, where Jason attended church and a short drive from where he lived. People on Main Street watched as Shuping’s body was delivered to its final resting place. Some residents arrived by foot. Others came on golf carts decorated with American flags. But all were there to honor one of their own.

Local first responders gathered along the route as well and held their hands over their hearts for the entirety of the procession. The Rockwell Fire Department attached an American flag to the outstretched boom of a firetruck.

A heavy silence fell over the bystanders as hundreds of law enforcement vehicles streamed past with their lights flashing. Following the motorcade, Shuping’s casket was carried to the Shiloh Reformed Church of Faith Cemetery by a horse-led funeral caisson. Even more law enforcement officers followed the caisson on foot. The only sound heard was the marching of their feet as they honored a fallen colleague.