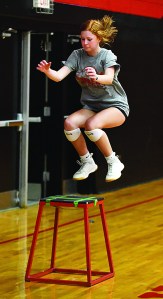 Cameron Black worked to improve her vertical jump for this season. photo by Wayne Hinshaw

“We had some moments in the first two sets where we were able to go back and forth with them,” Salisbury head coach Andrea Davis said. “But it’s hard to simulate Anna Rymer in practice when you try to prepare for South. We don’t have anyone like that. She can put the ball anywhere she wants to. We knew we had to score some points whenever she was on the back row. It was  tough for us to do much when she’s at the net.”

Rymer, a senior who generally owns the middle in CCC matches and is the focal point of South’s offense, apologized after the match to head coach Jenna Horne for not playing her best.

Horne laughed and informed her she had 31 kills, a new P.R.

“I made more errors than I wanted to, but we did finish very strong,” Rymer said. “This is a hot gym. It took us a while to play like we wanted to play.”

It’s not how you start, it’s how you finish, and South (10-0, 9-0) didn’t just win all of its CCC matches for the second straight season, it didn’t drop a single set.

“We were in some high-energy, competitive matches with Oak Grove and Central Davidson,” Horne said. “But not losing a single set was a goal for us. The girls accomplished that.”

Rymer took charge early in the second set as South raced to a 14-3 lead. Then she had three hitting errors, as the Hornets clawed back to 15-10. After a timeout, South got refocused, got a momentum-building block from Kendall Rockstad and more kills from Rymer and Cameron Black and pulled away.

South didn’t look sharp until the third set when Black, an outside hitter, got hot. She served the Raiders into a 7-0 lead. Then she started pounding kills from the left side.

“We  got our energy up to where it needed to be in that last set,” Black said. “We were more aggressive.”

Black was good last season, but she’s one of the county’s most improved players. She had 10 kills and 17 digs on Monday.

“Not having Kira Rymer, I knew the team needed me to do more,” Black said. “I grew some, and that helped. I practiced a whole lot and I’ve also gotten stronger in the past year.”

Coaches are rarely satisfied, even coaches of teams with perfect conference records.

“We had a conversation with the girls after the second set,” Horne said. “We played the last set the way we’re supposed to play, but we need to play all three like that.”

Ellen Yang had 13 assists and seven digs for the Hornets (3-7, 2-6). Mady Lawrence had 13 digs, while Riley Peltz had 11, Grace Blackwell seven, and Ella Trainor five.

But South had an unstoppable 1-2 punch with Rymer and Black.

“We had no answers for them,” Davis said. “South is well-coached, and they’re getting better and better.”