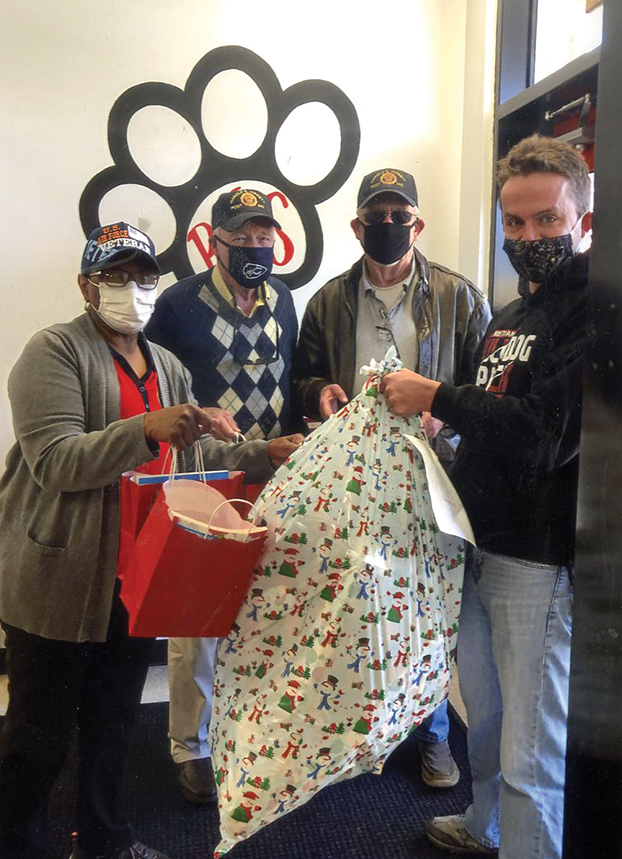 Queen Williams, Wayne Kennerly and Charlie Frick dropped a bag of toys off at a local school. Photo submitted.

SALISBURY — For the first time in several hours, Queen Williams looked up at the clock.

The time it read, closer to daybreak than sunset, shocked her out of the trance-like state she’d been under as she covered dozens of toys in festive wrapping.

“One night I stayed up all night wrapping gifts,” Williams said. “I looked at the clock and it was four o’clock in the morning. I said, ‘I’ve got to go to bed.’”

The toys, everything from Barbie dolls to remote-control cars, were packaged and placed in one of several oversized bags that consumed her dining room. Days later, Williams and two other Legionnaires from Harold B. Jarrett Post 342, Wayne Kennerly and Charlie Frick, delivered the gifts to schools across Rowan County.

“We loaded these bags in our cars and we were like little elves,” Williams said. “We didn’t have Santa, but he put us to work and said he needed us to run it this time.”

In a feat of holiday perseverance, Williams, Kennerly and Frick were determined not to let their Post’s Christmas tradition be deterred by COVID-19.

For the past 51 years, the Legionnaires of Harold B. Jarrett Post 342 have held a Christmas party for students with functional needs from nearby schools. The parties, the first of which was organized by Ed and Kay Brown Hirst decades ago, typically feature games, musical entertainment and a feast. Santa Claus always makes an appearance to hand out gifts to each student.

Kennerly said that the Christmas party always signifies the start of the holiday season for him. Even though they were unable to host the party this year due to the coronavirus pandemic, the Legionnaires refused to cut out the event altogether.

“With COVID coming along this year, there could be no party,” said Williams, who inherited the role of program coordinator this year. “I started thinking about ways in which we could give gifts.” 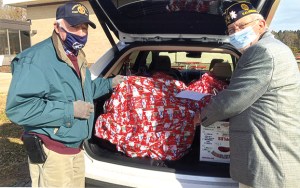 Wayne Kennerly and Charlie Frick prepare to deliver toys to students at one of several nearby schools. Delivering toys took the place of the annual Harold B. Jarrett Post 342 Christmas party this year. Photo submitted.

Instead of bringing the children to the gifts, Williams decided they would bring the gifts to the children. She contacted Sarah Boger, a teacher at Shive Elementary School, and obtained a list with more than 70 names of students from seven local schools. Each name was accompanied by three gift requests.

With the list in tow, Williams waded out into the hustle and bustle of Black Friday to do the shopping. The excursion ended up lasting at least four days and featured several trips to stores as well as some online shopping. It included “just a few returns,” Williams said.

“I don’t even know that there was a store around that carries any toys that I missed,” Williams said.

The gifts could not have been purchased, Kennerly said, without the sponsorship of Wallace and Graham, Cloninger Ford and Cloninger Toyota.

Once Williams bought a toy for every student on the list, she spent an entire night wrapping them. Williams said she “just started wrapping and didn’t stop.”

“Do you know how hard it is to wrap one of those toys?” Kennerly asked. “She wrapped over 80 and they were wrapped nicely too.”

Williams, Kennerly and Frick packed the gifts into their cars and delivered them to the schools on Dec. 10 and 11. It was always Williams’ goal to have the presents distributed by the second week of December.

“When (Williams) gets something started, she finishes it,” Kennerly said.

In order to ensure safety of the students, the three post members dropped the bags off at the front door of each school.

Kennerly said that he was happy to keep the tradition alive and spread some cheer, but desperately missed seeing the looks on students’ faces when they tore apart the wrapping paper and unearthed their Christmas present. 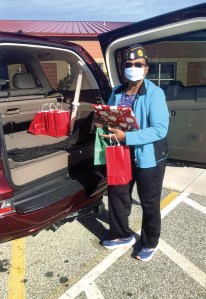 “It just doesn’t seem like Christmas,” Kennerly said. “We got all these gifts, took them to the school, but couldn’t see the kids.”

Williams said that there was a certain “emptiness” about not being able to interact with the students, but was proud that the Legionnaires continued the tradition. As the lead organizer this year, Williams said that she wanted to “carry on the legacy” of the late Harry Garwood, a longtime Legionnaire who helped organize the Christmas party for over two decades.

“It was a new experience for me and I learned a lot along the way,” Williams said. “It enlightened me and gave me something to do during this season of our lives.”

Ask Us: Readers ask about Cox’s eligibility to serve,…