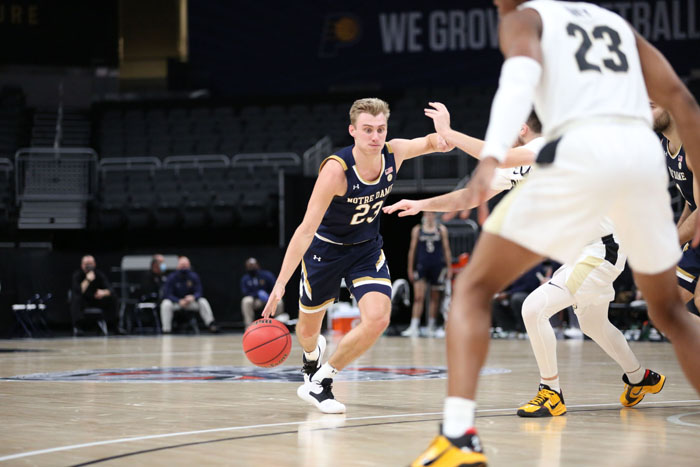 Hunter finished 4 for 7 from 3-point range and distributed eight assists. Trevion Williams scored 14 points and Mason Gillis scored 12 for the Boilermakers. Purdue made half their 28 3-point attempts.

Purdue led 47-42 at halftime, and a 6-2 spurt to start the second half extended its lead to nine. Notre Dame countered with a 3 from Dane Goodwin and two more from Djogo to tie 53-53, but the Irish wouldn’t gain the lead.

With the win, the Boilermakers moved their record to 33-7 in the month of December since the 2015-16 season.

GREENVILLE (AP) — Brandon Suggs had 18 points off the bench to carry East Carolina to victory over the Dukes.

Bitumba Baruti had 16 points, seven rebounds and five steals for East Carolina (6-1), which earned its fifth straight home victory.  Matt Lewis had 19 points and six rebounds for the Dukes (2-2).

Khyre Thompson, the Spartans’ second leading scorer entering the contest at 10.0 points per game, had 2 points. He shot 0 of 5 from behind the arc.

Hunter Woods had 19 points and eight rebounds for the Phoenix (3-1).

CHARLESTON, S.C. (AP) — Cory Hightower came off the bench to score 17 points to carry Western Carolina to victory over College of Charleston  in overtime Friday night. Mason Faulkner had 14 points for Western Carolina (7-2). Matt Halvorsen added 13 points.  Payton Willis had 16 points for the Cougars (2-4) and hit a 3-pointer with two seconds left in regulation to force overtime.