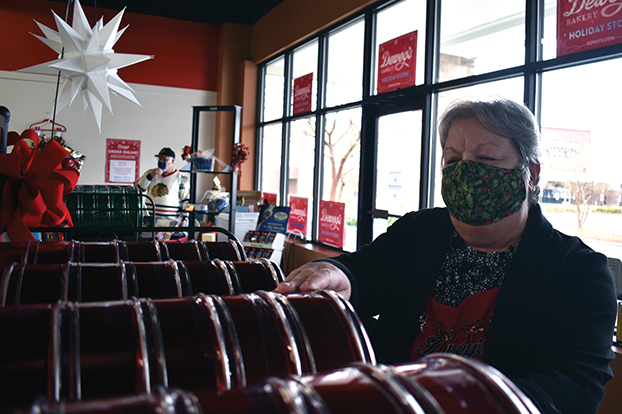 Peggy Inch places another tin container of Dewey's ginger snaps on the shelf in the holiday shop she and her husband are operating this Christmas season. Ben Stansell/Salisbury Post

SALISBURY — When Sharon Frankenfield is craving the buttery flavor of a Moravian sugar cake made by Dewey’s Bakery, she doesn’t need a GPS to find one.

“My car knows how to get to Dewey’s, so I don’t have any problem,” Frankenfield said.

Frankenfield first tasted the decadent treat when she was working in the immunology department of Wake Forest’s medical school.

“The grad students brought it in and it’s been downhill ever since,” Frankenfield said with a laugh.

Typically, when the hankering for a sugar cake is overpowering, she has to drive the 45-minutes or so to Winston-Salem — the birthplace and home of the bakery which celebrated its 90th birthday this year.

But until Dec. 26, Frankenfield only has to drive to the Innes Street shopping center.

Dewey’s has temporarily returned to Salisbury for the first time in eight years, and it’s for a good cause. For a limited time only, a shop located near Staples and Cinemark’s Tinseltown USA is currently selling the bakery’s beloved sugar cakes, ginger snaps and lemon cookies.

Since 2012, Dewey’s has allowed nonprofit organizations to operate holiday shops where they sell the bakery’s products to raise money for their causes. The organizations that run the stores receive a 35% cut of most Dewey’s Bakery item sold. Moranda Little, Dewey’s fundraiser, said that the Holiday Stores helped nonprofits raise over $385,000 last year.

“It’s one of our best, I think, fundraisers that we do,” Little said. “Typically, my stores will profit about $15,000 within those six weeks, but there is a range.” 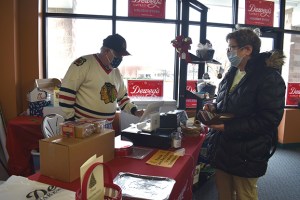 Ron Inch helps Sharon Frankenfield check out at the Dewey’s Holiday Shop that he is currently running with his wife to raise money for their nonprofit. Ben Stansell/Salisbury Post

Peggy and Ron, who live in Winston-Salem, approached Little about running a holiday store to raise money for their nonprofit. Since there were already eight pop-up locations in the area, Little encouraged them to open a shop in an under-utilized market — Salisbury.

They took her up on the offer and found a vacant storefront near Staples, where their daughter works as the store’s general manager. The location, Little said, happens to be the exact spot where Dewey’s operated a company outpost nearly a decade ago.

Since opening the holiday store around Thanksgiving, Peggy and Ron have been commuting to and from the shop every day after picking up fresh baked goods from Dewey’s, which has a location just three blocks from their home. The drive isn’t bad, Peggy said, especially when they’re raising money for a cause that’s close to their hearts.

The idea for Helping Athletes Navigate Dreams was inspired by years of attending their grandchildren’s sporting events. And there are a lot of them to attend. Peggy and Ron have several grandchildren who play everything from basketball to competitive cheer.

“We’ve been in sports all our lives, said Ron, who himself played professional hockey for the Winston-Salem Polar Twins.

Recently, Peggy said, they’d started noticing a troubling trend emerge among some of their grandchildren’s teammates.

“We started this because we saw with our grandchildren’s teams, there were kids who couldn’t play and they were having a hard time getting funding,” Peggy said.

The nonprofit provides monetary support to young athletes, high school age or under, whose families may not be able to afford the expensive equipment and fees that come with playing organized sports. Peggy and Ron have established a panel of ex-coaches that will review applications for funding and they will directly pay the organization offering the sports to ensure that the money is used for athletics.

Although the nonprofit is based in Winston-Salem, Peggy and Ron said that they hope it will have an impact statewide.

“We’re new so we want to get our name out there,” Peggy said. “It’s good that we are doing this shop in Salisbury because it opens up another market of people we can help.”

Peggy and Ron started Helping Athletes Navigate Dreams in January, which at the time they thought was the perfect moment.

“We’re retired and we’d thought about it for a while. We thought it’d be a good time to launch this, which we did in January,” Peggy said. “We had some donations and we did fund a few in January and February. Then the world stopped.”

Peggy said that she and Ron were on their way to work the VIP buffet at the 2020 NCAA Men’s Basketball Tournament in Greensboro to raise money when they got a call that the tournament had been canceled.

“We didn’t do any fundraising because there wasn’t anything to do,” Peggy said. “We’re getting started back up and this is our first big fundraiser.” 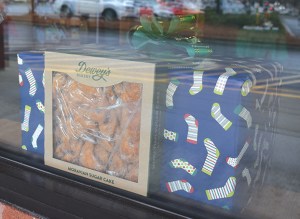 With just a few days left in the fundraiser, Peggy said that she’s pleased with what they’ve been able to accomplish. People like Frankenfield, who have made it a tradition to eat a Dewey’s sugar cake during Christmas, have flocked to the shop.

“I like to say we feed North Carolina’s Christmas breakfast with our sugar cakes,” Little said.

Dewey’s cakes and cookies aren’t the only items offered at the holiday shop. Peggy recruited various friends who make soaps, Moravian Stars, quilts and custom gifts to offer their products as well. There’s a freezer full of pot pies and other frozen meals made by Winston-Salem staple Mrs. Pumpkin’s are available too.

The Helping Athletes Navigate Dreams Dewey’s Holiday Shop is located at 317 Faith Road and is open from 11 a.m.-5 p.m. Monday-Thursday and 1-5 p.m. on Sunday. The shop will be open until 3 p.m. on Christmas Eve and will reopen for one final day on the day after Christmas.

More information about Helping Athletes Navigate Dreams can be found online at helpingathletes.org.