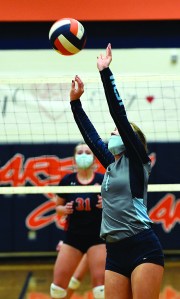 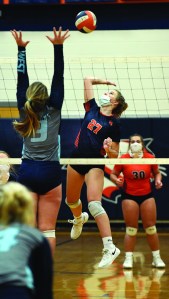 West (6-3) is tied for second in the North Piedmont Conference with South Iredell, while Carson (3-6)  is tied with East Rowan for fourth.

A story on Carson’s Senior Night is scheduled for Tuesday’s edition.

South Rowan had no trouble with Central Davidson, one of the Central Carolina Conference’s stronger teams. The unbeaten Raiders rolled 25-15, 25-12 and 25-12 on Friday.

Salisbury’s CCC match at North Davidson was postponed Friday, but it gave the Hornets a chance to play against rival North Rowan.

Ellen Yang had 25 assists, 17 digs and six aces for the Hornets. Brooke Cunningham had 12 kills, and Alli Tuck had nine.

In Carson’s win against Statesville, Tate Barger had 33 assists, Kary Hales had 21 digs, Jaden Vaughn had 18 kills and Allie Burns had 10 kills.

Thirty-two teams will make the playoffs from each classification— 16 East and 16 West.

South Rowan is the only Rowan team certain to be in the state playoffs. West Rowan  is a bubble team in playoff projections offered by High School Overtime.

The Central Carolina Conference Championship Meet is set for Tuesday at  Salisbury Community Park. Runners will race in waves based on seed times.

The South Rowan boys, defending champs, will run at 2:30 p.m., with Oak Grove expected to provide the strongest competition.