Through humor and song, Patrick Henry delivers message about connection at Power in Partnership event 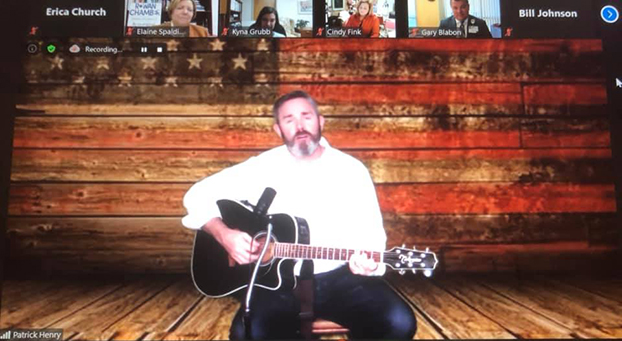 Patrick Henry sings a song during the December Power in Partnership breakfast. Photo courtesy of the Rowan County Chamber of Commerce.

SALISBURY — In a typical year, Patrick Henry speaks over 60 times to live audiences at conferences and company events around the country.

But since 2020 is not a typical year, Henry performed on Thursday morning at the Rowan County Chamber of Commerce’s Power in Partnership breakfast the same way he has at events for the last 10 months — from behind a computer screen.

Despite the virtual setup, Henry still delivered the same wit, business insight and entertaining tales that he’s known for.

A former Nashville-based songwriter, Henry combines his penchant for weaving words together with stories about business and life to deliver insight on how companies can better connect with their customers.

Henry covered a lot of ground during his performance, from singing songs about a girlfriend he had in Nashville to delving into the history of the Boll Weevil, an invasive insect that changed the agricultural landscape of southern Alabama. While Henry’s anecdotes started out as random threads, he tied them together in the end to tell the importance of human connection.

Henry also spoke about his new project, called Friendship 21, that started in January. The initiative is a challenge for people to make a new friend for 21 straight days, with the idea that meeting new people will eventually become a habit. Henry took on the challenge earlier this year before the pandemic, and is hoping that once health concerns over COVID-19 subside, Friendship 21 can blossom.

“It occurred to me that, for me in my life, this was practice because as we’ve become social distanced, we see the light at the end of the tunnel and we’re going to start a social tightening,” Henry said. “Reconnecting with people on that emotional level is critical as we start to reconnect to our communities.”

Cindy Fink, executive director of Rowan Meals on Wheels, challenged Rowan Countians to take on the challenge as well.

“In our community, we’re very focused on diversity and inclusion,” Fink said. “I would challenge all of us in the Salisbury-Rowan community to reach out and make a friend with someone who doesn’t look like you, someone who is different from you and someone you meet in an environment you wouldn’t normally step into.”

Meals on Wheels and Rowan Helping Ministries sponsored the Power in Partnership event.

Since this was the last Power in Partnership event of the year, 2020 Chamber of Commerce Board of Directors Chair Gary Blabon delivered his parting remarks. Blabon said that he’s already passed the gavel to Bob Honeycutt, the incoming chair.

“It’s been an absolute pleasure to serve in this capacity,” said Blabon, the president and COO of Novant Health Rowan Medical Center. “… It’s been a year like no other. I feel like I was in the right seat at the right time.”

Elaine Spalding, president of the Rowan County Chamber of Commerce, voiced her appreciation for Blabon.

“(Blabon) has done a fantastic job as our chair of the board. He was the right leader for the right time for the Rowan Chamber and this entire community dealing with COVID-19,” Spalding said. “I distinctly remember our March executive committee meeting when I was going ‘We’ve got the big salute to agribusiness coming up and we’ve got this program and this program and this program coming up,’ and Gary said ‘No, we are not going to be meeting in person. We’re going to keep our community safe.’ He was exactly right.”