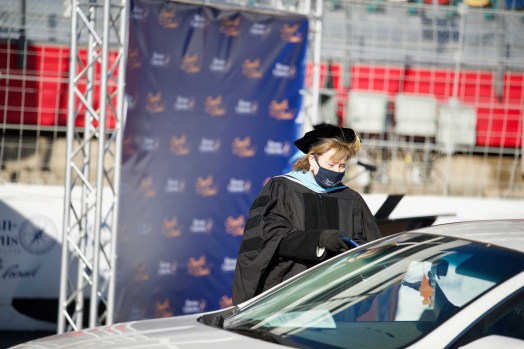 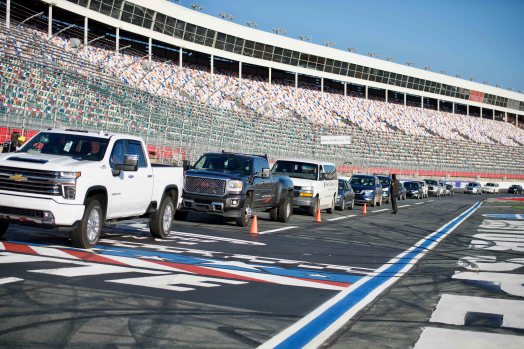 Carl Blankenship/Salisbury Post - Graduates lining up to recieve their diplomas. Family could come, but they had to all be in the same car.

CONCORD — The latest round of Rowan-Cabarrus Community College graduates crossed the finish line instead of the stage on Friday.

In a first for the college, students drove into the Charlotte Motor Speedway complex and watched a recorded presentation on the jumbotron before making their way onto the track, where they had their names read and were handed diplomas by RCCC President Carol Spalding.

It was a class of more than 2,000 students of all age groups, 80% of which are from either Rowan or Cabarrus counties.

“While we wish we could be together in a more traditional format today to celebrate you and your accomplishments, we are extremely grateful for the opportunity to hold our first-ever drive-thru graduation,” said RCCC Board Chair Carl Short.

The program included an address from RCCC graduate Isaac Mayle, who completed an associate of engineering degree at the college in May and is now studying at North Carolina State University.

Students wore their caps and gowns as they celebrated earning degrees ranging from associate’s degrees intended to transfer to other institutions to technical diplomas and high school equivalency.

“Like you, I was disappointed that COVID-19 derailed the plans for our graduation ceremony in the spring,” Mayle said, noting this could be the first and maybe only time a graduating class takes a victory lap.

Mayle, a Goodnight Scholar, said his life today is something he only could dream about years ago because of poor choices and mental illness.

“When I was in high school, my days consisted of drinking and doing drugs,” Mayle said. “Hard drugs, heroin and some of my friends died of overdoses.

Mayle said he was in and out of rehab programs and diagnosed with bipolar disorder. After he finished high school, he cleaned up and enrolled as an automotive student at RCCC. He eventually moved to Texas to further his education and work in the field. He started drinking again and struggled with his mental health. Mayle said his boss realized he was in trouble and took him to the hospital.

Mayle said he had his last drink in 2007, but he still struggled with depression and spent more time in the hospital. He moved back to North Carolina to be with his family.

“Years passed, and I had little hope that I could turn my life around,” Mayle said.

Mayle said he drove to RCCC for five years and sat in the parking lot but could never bring himself to get out of the car.

Mayle, a space enthusiast, said he saw an interview with astronaut Drew Feustel, who said he started his higher education at a community college. In the fall of 2017, Mayle made it inside and enrolled.

“Rowan-Cabarrus was a life saver for me,” said Mayle, who went on to be part of NASA’s Community College Aerospace Scholars Program.

Mayle told the graduates his strategy is to work on things that he can control, and it is never too late to chase their dreams.

Catherine Cathcart earned her GED. At 56, she said it was a goal for her to complete it, but she found a new family in the college as well.

Cathcart has spent her career as a certified nursing assistant. But something was always missing without the diploma, and she could have had better jobs earlier in life if she had qualifications.

Cathcart said her granddaughter, who died when she was 10, would have graduated this year as well. She wanted to show her other grandkids they can finish school if she can.

Cabarrus County paramedic Kimberly Allred said she is looking to advance with the help of her associate’s degree in emergency medical science. She is already working toward a bachelor’s degree.

Allred said the circumstances of the graduation were sobering, but it was still a happy moment to be recognized.

“I hate that we had to do it this way, but at least it’s something and it’s acknowledging our achievement,” Allred said.