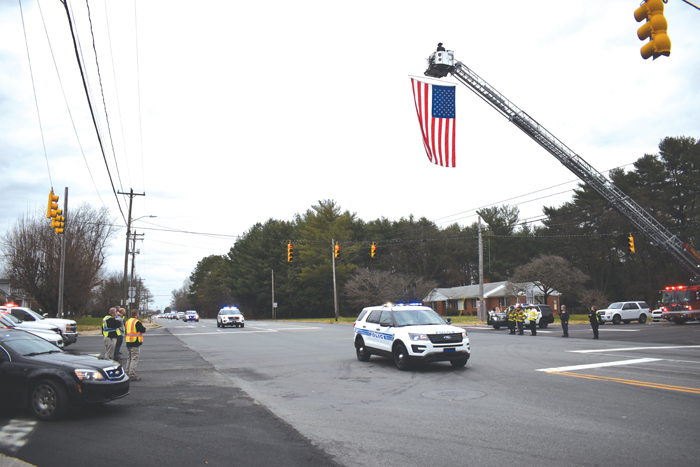 By Josh Bergeron and Shavonne Potts

SALISBURY — Whether it was staying after practice to provide coaching to a youngster or coming back home from college to play the handbell in his church’s ensemble, you could always count on Jason Shuping. 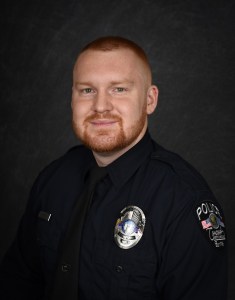 Jason, who competed in throwing events at East Rowan and the University of North Carolina at Pembroke, could be counted to stay after practice to help kids from Erwin Middle School who wanted to learn how to do the same, says former coach Rick Roseman. He might not have been the most gifted athlete on the track or football field, but chances were he would work harder than everyone else, said former coach Danny Misenheimer. And when he went off to college, the handbell director at his church, Shiloh Reformed in Faith, knew she could still call him to ask about playing the big bass handbell in the ensemble — a task that wasn’t suited for just anyone — said Pastor Richard Myers.

Jason didn’t draw attention to himself, but folks who knew him saw leadership qualities shine through.

“As far as what you would want in a police officer, he would be top notch, and he was like that his whole life,” Myers said. 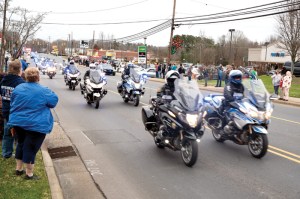 Josh Bergeron / Salisbury Post- Motorcycle officers from various law enforcement agencies lead a procession carrying the body of Jason Shuping, a Concord police officer who was killed during a shootout near Concord Mills on Wednesday night.

A 25-year-old officer for the Concord Police Department, Jason’s life was cut short Wednesday during a shootout at off of Bruton Smith Boulevard, near I-85 and Concord Mills. He was approaching a suspect in a carjacking incident at a Sonic restaurant with another Concord officer, Kaleb Robinson. The suspect fired shots from a handgun that killed Jason and injured Robinson.

Jason had been with the Concord Police Department a year and a half. Robinson, 23, had nine months of experience. Both men were Rowan County natives and graduates of East Rowan High School.

Robinson was still hospitalized Thursday but expected to make a full recovery.

“This tragic and senseless loss of a member of our CPD family is devastating, not only to the officer’s family and loved ones but every law enforcement officer in the city, county, state and country,” Gacek said. “It’s tragic incidents like these that serve as a grim reminder that police officers take an oath to serve their community and lay their lives on the line each day to protect the public.”

Gov. Roy Cooper said he spoke with the Shuping family and offered them his support, condolences and prayers.

Jason and wife Haylee lived in the Faith area. They met at East Rowan High School — where both were on the track team and won the prestigious Jamie Ledbetter Award, given to athletes for their hard work and perseverance. Jason won it two years in a row.

Laurie Wyrick, a teacher and coach at East Rowan, may have been the unwitting matchmaker in their relationship. Wyrick recalled a conversation with Haylee in which her student lamented that she had been cut from the softball team. Wyrick encouraged her to try track.

Haylee said she wasn’t much of a runner, but it was discus where she put her talent to use — taking high honors in local meets, conference championships and regionals. Her hard work and talent paid off when she earned a scholarship to the University of North Carolina at Pembroke. It was on the track team, Wyrick says, where she and Jason bonded.

Jason’s college destination was also UNC Pembroke; he earned a degree in criminal justice and was on the track team, too.

“He wasn’t the biggest or the fastest, but he did what he needed to and keep himself competitive,” said his former football coach Danny Misenheimer. “He did the little things and showed up to work everyday and put in the work.”

The “little things” were meaningful to others, too. Junior varsity and middle school players look up to the varsity football team like they’re professional players. So, it meant a lot when Jason made time to give them high fives or came to talk to them.

Rick Roseman, who coached Jason in track, said he was devastated to learn about the East grad’s passing.

“He was a tremendously hard worker, and he was so driven, especially in the discus,” Roseman said. “If he knew what he wanted to accomplish, he was driven to accomplish that.” 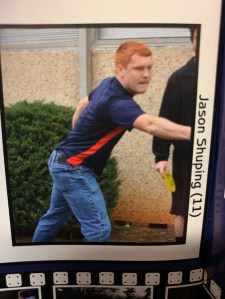 “And he would stay as long as needed,” he said. “He was not only drive himself, he was a motivator for other kids.”

Roseman spoke to the Post while watching a procession on TV carry Jason’s body from Charlotte, through Concord and to Powles Staton Funeral Home in Rockwell, which is handling arrangements. The procession would eventually pass directly in front of his house. As he watched the procession and saw Jason’s picture, Roseman couldn’t help but see an image of the young man he coached and his smile.

“It just seems like a nightmare,” he said, recalling that a police officer in Mount Holly was killed by gunfire last week. “These people put their lives on the line every single day for us.”

Jason grew up attending Shiloh Reformed Church in the town of Faith. He was an active member of the youth group and went on mission trips as an adult, said Pastor Myers. Jason’s mother is the church’s longtime secretary. And Myers married Jason and Haylee in 2018.

“I can assure you that we all have shed tears in our church today,” Myers said. “He was as fine a young man as you could ever find.”

Former Sheriff George Wilhelm came to know Jason through Boy Scouts, where he earned the rank of Eagle Scout.

“He was a very smart and kind person. He has a great family and will be greatly missed by our whole community and his church,” Wilhelm said.

Andrew Poston, who also met Jason through Boy Scouts, said the future police officer had a desire to lead and to the right thing.

“The thing that struck me the most was the sense of duty he had, even as a teenager,” Poston said. “He took the words of the Scout Oath to heart when it said “On my honor, I will do my best to do my duty to God and my country.”

Jason was also in the honors chorus, singing the bass parts. His former teacher, Dean Orbison, remembered some lighter moments, including when Jason split a seam in a costume for the Madrigal Dinner. But there was only minutes until Jason had to go on.

“Orb, what am I going to do,” Orbison recalled his student asking.

“You’re going to sit in the floor and give me a needle and thread and I’m going to sew while you sit there,” Orbison recalled.

Jason’s bright red hair stood out, Orbison said, but the twinkle in his eye and willingness to serve shone bright, too.

Rowan County on Thursday was full of stories about how its native son made a difference in the lives of others and set an example for others. Gloria Wilhelm said she remembered Jason being a Faith Elementary Good Citizen. Longtime friend Dalton Rowland said Jason was kind, caring and compassionate. Multiple people who spoke to the Post remembered him as a sly joker with a good sense of humor. On the marquee outside of East Rowan High School Thursday, a message stated, “In memory of Jason Shuping, Mustang gone too soon.”

Jason Shuping is the son of Lynn and Dane Shuping. He has one brother, Paul, a sister named Laura and a half-sister named Terri. Powles Staton Funeral Home said arrangements were incomplete Thursday.

In a post online, Paul Shuping, who also works for the Concord Police Department, said, “Fly high and watch over us brother. Brothers in arms. Walking the thin blue line. Until we meet again. I love you.”

The State Bureau of Investigation is now handling a probe into the incident. The three officers who responded, including the injured officer, have been placed on administrative leave, which is standard.

Gacek said that police officers in the department would be able to rely on support from the community in coping with the loss.

“The Concord Police Department is comprised of a resilient bunch,” Gacek said. “We’re gonna get through this. We’re a big family. It’s going to be tough. It’s going to affect us in different ways, for different lengths of time, at different levels. But we have a huge support system here. We have a community that provides us with a broad base of support.”