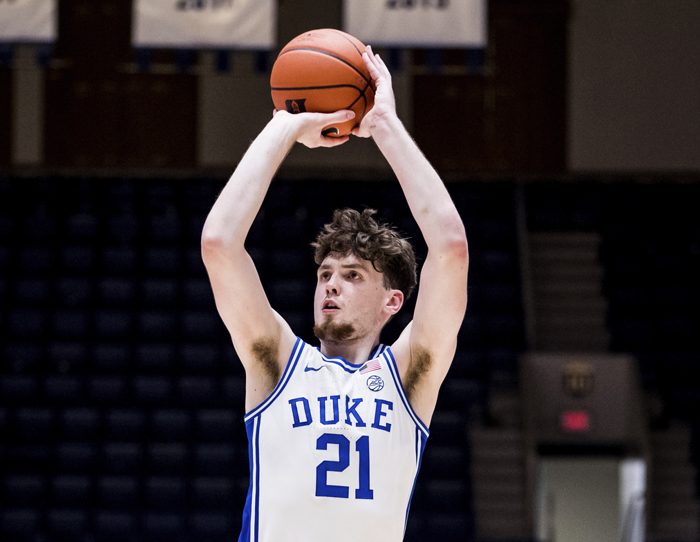 Duke's Matthew Hurt is leaving the Blue Devils for the NBA. (File photo courtesy of ACC)

D.J. Steward had 16 points to go with seven rebounds, while Jeremy Roach scored 14 and Jaemyn Brakefield added 10 for Duke, which led from the second minute onward.

The Blue Devils (3-2, 1-0) entered the game in jeopardy of falling below .500 for the first time since 1999, but convincingly steered clear.

Except for a 2-all tie, the methodically effective Blue Devils led throughout the opening half, including by 11 twice, before settling for a 41-34 lead at the break.
Notre Dame got as close in the second half as 55-50 with 10:42 to go, but Duke pushed its lead to 73-56 with 4:38 remaining.

Duke: The Blue Devils showed few ill effects one day after announcing that highly regarded freshman Jalen Johnson (11.8 points, 8.3 rebounds, 2.0 blocks) will be out indefinitely due to a foot injury. Roach, Steward and Brakefield each demonstrated smoothness that belied them playing in their first collegiate road game.

Notre Dame: The Irish continued to flounder against ranked teams, dropping to 0-3 this season and losing for the 24th straight time to such clubs since their November 2017 win over Wichita State. Notre Dame has seven more games on its schedule against teams that are currently ranked.

Duke: The Blue Devils are off until hosting Pittsburgh on Dec. 29. With two other games in the window canceled, Notre Dame represented Duke’s only contest over a span of 20 days.

Notre Dame: The Irish face Purdue on Saturday as part of the 10th annual Crossroads Classic in Indianapolis. Notre Dame is 3-1 against the Boilermakers in Classic matchups.

Donations from Christmas Happiness Fund ahead of totals from…