High school football: Zeek is unique — now it’s official that Georgia Tech will be his next team 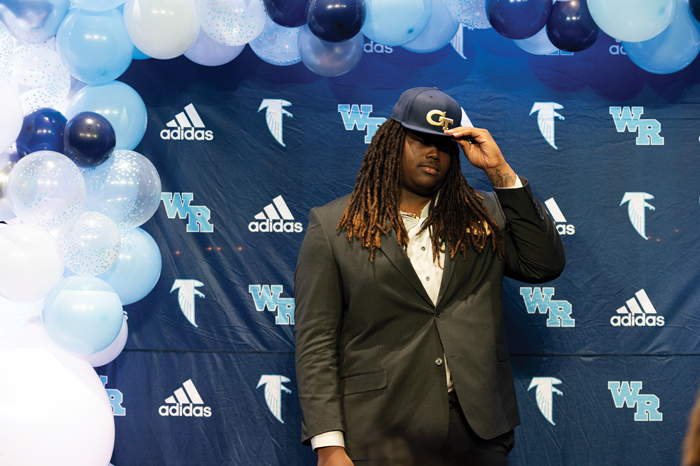 Biggers is rated as a three-star prospect. He’s ranked No. 71 nationally among defensive tackles and 58th among all North Carolina seniors by ESPN. He took advantage of an early signing window that lasts through Friday. There will also be a standard signing period in February.

There’s no normalcy in the year of COVID-19, so Biggers didn’t have his party in West’s media center. Instead he signed at The Reach Church in Salisbury, about a half-mile from Livingstone College.

But the support was still there from teammates, friendly foes, most of them Salisbury Hornets, and a small army of family members.

“Zeek’s mom (Kelly Taylor Biggers) did a super job as far as putting it all together,” West head coach Louis Kraft said. “The stage, the blue balloons, the West Rowan backdrop, the lighting —  everything was absolutely perfect. She set a new standard for all signings.”

There were refreshments, including cupcakes with footballs and Georgia Tech logos on top.

The pandemic has altered everyone’s time frame. Normally, football signings arrive in the postseason, after awards have been accepted and careers have been wrapped up in the fall.

But Biggers still has his senior season in front of him. It should be his best. He’s expected to vie for county defensive player of the year honors with an impressive list of returning standouts that includes Salisbury junior Jalon Walker and senior Zae Clay, as well as North Rowan seniors Zay Davis and Jaharion Graham.

“In a non-crazy year, Zeek would be done with high school football when he signed,” Kraft said. “But this is a very unique situation.”

West assistant coach Joe Robinson noticed Salisbury players in attendance and informed Kraft. So when it was Kraft’s time to speak, he asked for a show of hands from Hornets.

“There was a pretty loud cheer — there were more Hornets here than I expected,” Kraft said with a laugh. “I told them I was sorry to inform them that Zeek would still be around to play against them in February.”

That matchup is scheduled for opening night — Feb. 26 — the dream matchup to start a delayed season, especially if fans can attend in normal numbers. West has won 17 in a row against Rowan opponents but hasn’t played Salisbury in that stretch. Salisbury was state runner-up in 2AA a year ago and has a host of studs back.

Division I football signings are rare events. Kraft figures that Biggers is only the seventh West player to move on to big-time college football in the last 20 years and two of those were recruits who received appointments to service academies.

“Just based on the number of kids who have played football for West in the last two decades, Zeek’s signing with Georgia Tech puts him in a pretty elite group of athletes,” Kraft said. “This is definitely exciting for Zeek, the fans, the school and the community.”

Only 7 percent of a million or so high school football players nationwide make it to the NCAA  at any level. Less than 3 percent get the opportunity to compete in Division I.

But Biggers is different than most.

He came into the world at almost 11 pounds. Due to his size, he always played up an age group in youth football. The story goes that at age 15, he was mistaken for an NFL player.

He played some running back in his youth and he’s still a surprisingly effective basketball player. He’s a very large individual who is agile and mobile enough to have legitimate NFL aspirations. He just has to stay healthy and keep developing.

Biggers is confident that Georgia Tech, which went 3-7 this season and could use some help, is the right place for him to develop. He was recruited hard not only by head coach Geoff Collins, but by co-defensive coordinators Larry Knight and Nathan Burton. Knight is also the defensive line coach, and he’s big on Biggers.

Biggers turned down N.C. State and East Carolina, among others, when he chose the Yellow Jackets. He verbally committed back in May. He felt at home when he visited the Atlanta school shortly before the pandemic shut the campus visits down.  He said at Georgia Tech, he felt as comfortable as he does hanging out in Rowan County.

Georgia Tech is challenging academically. West defensive back Domonique Noble, one of the standouts of the state-championship era, signed with Georgia Tech. He’s a graduate and is now a logistics account executive working in Atlanta.

“I’m ready to get to Georgia Tech and put on for my city,” Biggers said.

Biggers thanked God, coaches and teammates for getting him to Signing Day, but mostly he thanked his mom — “for sticking with me through thick and thin and sacrificing everything for me.”

“Zeek has a big heart and a big body to go with the heart,” his beaming mother said.

For Biggers, his epic day didn’t end when he signed on the dotted line.

There was still basketball practice to get to, and coach Mike Gurley was eagerly waiting to run off those cupcakes.

Basketball games are scheduled to start on Jan. 4.

Josh Bergeron contributed to this story.

College football: Chrismon made the most of every day…