College football: Chrismon made the most of every day as part of UNC football team 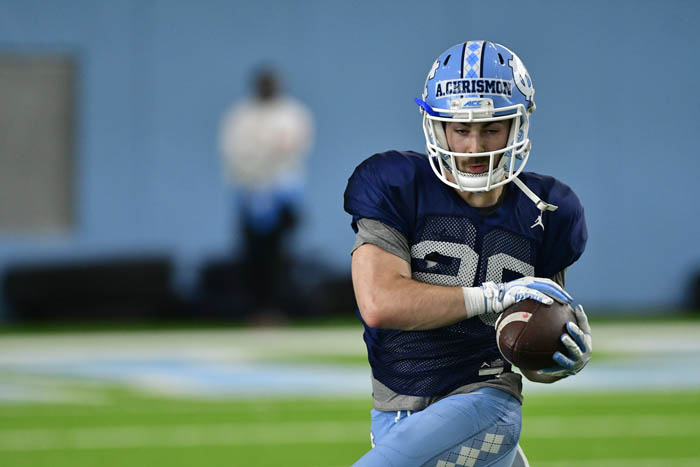 CHAPEL HILL — Senior Day in Chapel Hill was carefully orchestrated alphabetically and his surname begins with a ‘C’ so former South Rowan star Austin Chrismon was one of the first Tar Heels to storm out of the tunnel and take a pregame handoff from smiling UNC head coach Mack Brown.

“No, we didn’t get to keep those footballs,” Chrismon said with a laugh. “That was just a photo-op.  What normally happens is we get a framed jersey at the end of the season to keep.”

A great deal whirled through Chrismon’s mind on that Saturday, with Western Carolina in town. He didn’t get to contribute often on the field no matter how hard he worked, but pride and satisfaction overwhelmed any disappointment. After all, he was part of a program that went from losing frequently to heading to bowl games during his time on campus.

Normally, Chrismon’s family would’ve been down on the field with him on Senior Day, but not in a COVID world. They were in the seats.

“A lot flashes in front of you on Senior Day, sort of a snapshot of all four years with the program,” Chrismon said. “I stood there watching the other guys come out and the memories of the good times we had swarmed over me all at once.”

Chrismon was listed as a junior on the Tar Heels’ roster. He would have two years of football eligibility left after this one— one due to his redshirt in 2017 and one for the bizarre 2020 season that every player can get back if he wants it.

But he’s decided to finish his career with UNC’s bowl game. Where that bowl will be and whether or not he’ll be on the travel squad that goes to it is still to be determined. He’s played in only a few games in his career, but the 2019 Military Bowl he was part of was the highlight. Those memories of Annapolis, Md., and Washington, D.C., will stick with him even after he’s a grandfather.

Whatever happens with this season’s bowl assignment, Chrismon is ready for what’s next. Graduation Day for him is just around the corner. The last class he needs for a degree in exercise science won’t be in a classroom. It will be an internship with the Carolina Hurricanes hockey team.

“I’ve thought about coming back and I’ve also considered transferring after graduation to another school to play,” Chrismon said. “But I know in my heart it’s time to move forward. I think I got what I needed to get here. The football experience at UNC helped me become the person I want to be. That’s not the same person I thought I wanted to be when I was coming out of high school, but you grow and you learn. If I could do it all over again, I wouldn’t change that much.”

Chrismon was a strong high school football player, but he was probably a better baseball player. Carson’s Owen White, a second-round draft pick in 2018 and Gatorade State Player of the Year, was already one of the state’s best pitchers in 2017. White gave up a handful of extra-base hits that season. Chrismon smacked two doubles against White in the same game.

Back in the summer of 2016, heading into senior year of high school, Chrismon seemed destined to be a college baseball player. He could run and hit and field, and of course, his father, Thad, South Rowan’s head baseball coach, had been an All-America pitcher at UNC, racking up 26 wins and 41 saves. Thad is still the Tar Heels’ record-holder for saves.

“The plan going into my senior year of high school (2016-17) was to get recruited and play baseball in college, but then I tore up my shoulder during football season and couldn’t go to any baseball camps,” Chrismon said. “After the injury, I started thinking more about where I wanted to go to school for academics. I knew I wanted to go to a school I’d be proud to go to.”

UNC, not surprisingly, surged quickly to the top of Chrismon’s leaderboard of preferred academic schools, although there was no pressure from his father or from his mother, South AD Angie Deal Chrismon, a former UNC cheerleader. They supplied their son, who was the student body president and had a 4.89 GPA, with the breathing room to find his own path.

It just turned out to be the same one they traveled as teenagers.

In the fall of 2016, before he was injured, Chrismon led South to its only win of the football season. The Raiders had officially lost 16 in a row when they beat Carson 19-16. Chrismon rushed for 164 yards and scored two TDs, including the game-winner. Then he intercepted a pass to seal the victory.

Besides the shoulder injury, there was another catastrophic event in Chrismon’s life in the fall of 2016. That was the sudden death of his grandfather Larry Deal, who had retired after a long career at South Rowan, where he made legendary contributions to the football and track and field programs and was a long-time AD.

“My love for football came from my grandpa,” Chrismon said. “He was the one who taught me the game. He taught me to love it and how to have fun with it. We could have so much fun just throwing a football around.”

The acceptance letter that arrived from UNC was a red-letter day in Chrismon’s life. The phone call that followed a few days later from Gunter Brewer, a UNC assistant who was serving as receivers coach, co-offensive coordinator and recruiting coordinator for head coach Larry Fedora, was even better. He told Chrismon he had a spot on UNC’s football team as a preferred walk-on, if he wanted it. He would be a slot receiver.

Chrismon definitely wanted it. This was the dream. Not only was he headed to his No. 1 choice of schools, he’d get to keep playing football.

It all went by fast. After that redshirt year in 2017, Chrismon continued to work and practice, but he didn’t play at all in the 2018 season. Those were tough years for the Tar Heels, and after 2-9 and 3-9, changes were coming. Mack Brown, who had been head coach of the program from 1988-1997, was hired in November 2018 to replace Fedora.

That was good news. Brown was a great recruiter and more talent poured into the program, but Chrismon’s chances of getting on the field as a receiver diminished.

So Chrismon found a new way to get on the field — special teams.

When the Tar Heels battered Mercer in November 2019, Chrismon got to play and made a big hit on a kickoff.

“I did well enough on special teams in the Mercer game that it led to me being on the travel team to the Military Bowl,” Chrismon said. “That bowl game was my best experience in college football because it’s more than just the game. There’s a whole week of activities leading up to the game.  When you’re a walk-on and you get to play in a bowl game, you prove to yourself  that you belonged out there. After two really tough seasons, that bowl win gave us a winning record (7-6). For me personally, it was the first winning team I’d been on since youth football.”

Even with the pandemic playing out ominously in the background, Chrismon never doubted that 2020 would be a terrific season for the Tar Heels, who had a special offense and a young defense that kept getting better.

“I was putting everything I had into special teams, but while we were getting ready for Syracuse in the season opener, I hurt a hamstring,” Chrismon said.  “That was a setback. That kept me out of practice for weeks and if you can’t practice you can’t play.”

After Syracuse,  none of the Tar Heels played again in the month of September. The Charlotte game was canceled. The down time helped Chrismon heal, but he’d gotten behind at that point and there wasn’t much chance of getting back on the depth chart.

The highlights of the season were provided by his family’s trips to see him.

“My parents know Chapel Hill, so there was always a discussion — do we go to my favorite restaurant or to theirs,” Chrismon said. “They got to experience Chapel Hill again during the last four years, but it wasn’t like they were reliving their college experience. They’re much different people now than they were in college.”

Now that he’s done with classes, that’s a weight off his shoulders.

He chose a challenging road academically. Lots of biology, kinesiology, anatomy and chemistry.

“Coming out of high school, math was my favorite subject, but that’s one of the ways I’ve changed — now it’s definitely science,” Chrismon said. “I love working out problems, exploring new things and figuring out what makes things work.”

He’s not sure yet whether physical therapy school is his next step. His other option is to plunge into the world of being a strength and conditioning coach. His internship with the Carolina Hurricanes is coming up in January and will help him make that decision.

Whether he becomes a therapist or a coach, Chrismon will look back on his  college football career with no regrets.

“Sometimes you don’t get everything you feel like you’ve worked for, but I still went out there every single day and made the most of it,” Chrismon said. “It was a character-defining time for me and it brought me closer to being who I want to be. I didn’t just go out to practice every day because I had to, I did it to make my team better and to make myself better. Working as hard as you can is never an empty goal.”