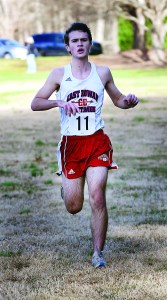 East’s Thomas Ferguson finished 2nd and led the Mustangs to a team win. Photo by Wayne Hinshaw, for the Salisbury Post

Taking third at 17-under was the team of Todd Deaton and Keith, Michael and David Dorsett.

“We had an excellent field, with 50 players in the competition, and excellent golf was on display, especially from the champions,” tournament committee member Stan Honeycutt said. “When we set the field we knew that the Gegorek-Medinger team would be in the mix for the championship. Both Steve and Michael are very tough competitors, Grey is a terrific ball striker, and no one rolls it like Barry.”

Tournament participants helped reak another tournament record, as they raised $1,000 for the Post’s Christmas Happiness Fund.

Finishing second was the team of  Lenny Mauseli, Bev Cobb and Susan Wydner.

Azalee Huneycutt had closest to the pin. Clement had the longest putt.

Gray Stone freshman Emberleigh Pauley-Brown was the Yadkin Valley Conference champion and led the Knights to the team championship in Denton.

Alli Tuck had 10 kills and four blocks, while Ellen Yang had 26 assists, 18 digs, five kills and five aces to lead the Hornets to a Senior Night win.

Catawba’s men are still scheduled to host Lincoln Memorial on Wednesday at 1 p.m.

• Catawba’s men’s and women’s teams are scheduled to play at Mars Hill on Saturday afternoon.

McKenzie Gadson (Carson) had eight points and three rebounds for Anderson in Tuesday’s 77-67 loss to Emmanuel.