Duke freshman out with foot injury 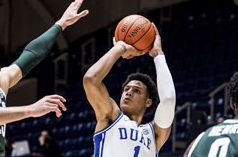 Photo courtesy of acc Duke’s Jalen Johnson (1) was averaging 11.5 points and 8.3 rebounds for the season so far.

DURHAM (AP) — No. 21 Duke says freshman forward Jalen Johnson is out indefinitely with a foot injury.

The team announced the injury Tuesday, saying the 6-foot-9 Johnson would not travel for Wednesday’s Atlantic Coast Conference opener at Notre Dame.

Johnson has started all four games, averaging 11.5 points and 8.3 rebounds with 2.0 blocks. Johnson had 19 points and 19 rebounds in his first game against Coppin State and was named league freshman of the week, but he had just seven points on 3-for-10 shooting in Duke’s loss to No. 13 Illinois last week.

Johnson was the No. 13 national recruit in 247sports’ rankings, the top-rated prospect in Duke’s No. 3-ranked class for this season.

The Blue Devils (2-2) announced last week they wouldn’t play any more nonconference games amid the coronavirus pandemic. The game against the Fighting Irish will come eight days after the loss to the Illini, and Duke isn’t scheduled to play again until hosting Pittsburgh on Dec. 29.