Cruiser placed outside of jail for deceased officer 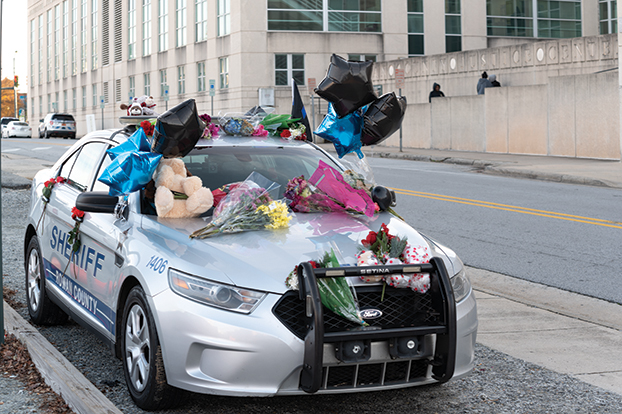 Josh Bergeron / Salisbury Post - A Rowan County Sheriff’s Office cruiser covered in flowers, balloons and stuffed animals sits outside of the Rowan County Justice Center and near an entrance to the jail Tuesday.

The Sheriff’s Office placed the cruiser there for people to place memorials to Kara Alsup, a detention center officer who died from injuries sustained during a crash in Charlotte.

Alsup was headed home from work around 6 a.m. last week when a dump truck sideswiped the mirror of her Toyota Corolla. She pulled over onto the left shoulder to call and report the incident and stayed in her vehicle.Then, a pickup truck struck the rear of her vehicle. She sustained serious injuries and died at the hospital.

A funeral service for friends and family will be held Friday in Rockwell under the direction of Powles Staton Funeral Home. The Sheriff’s Office Honor Guard will participate in the visitation for Alsup and will perform a flag folding ceremony with a 21-gun salute after the funeral service.